FAMILY has been a big theme at Glasgow whisky pub The Pot Still since the early 1980s.

It was the Waterson family that set the pub on its current path, introducing its whisky focus and name, before the Storrie family took the reins in the 1990s – twice being named SLTN Whisky Bar of the Year.

When Ken Storrie passed away in 2010 the pub was briefly taken on by another operator before siblings Frank and Geraldine Murphy and their dad, Brian, took over the lease in November 2011.

Six years later, in November 2017, The Pot Still regained its title, when it was named SLTN Whisky Bar of the Year, in association with Glenfiddich.

For me, whisky is all about The Pot Still. It’s how whisky came into my life.

For Frank and Geraldine, taking over The Pot Still was a homecoming.

Both had a huge affection for the pub, having worked there under Ken, and it was Ken and The Pot Still that had first ignited a passion for whisky in both siblings.

“For me, personally, whisky is all about The Pot Still,” Geraldine told SLTN.

Despite their experience behind the bar of The Pot Still and other Glasgow pubs, however, the younger Murphys had no previous experience running their own business.

Fortunately, they had a heavy hitter in the family.

Dad Brian is a veteran of the Glasgow trade, having owned and run a number of pubs across the city throughout the ‘80s, ‘90s and early 2000s.

“I knew that without the three of us it wasn’t going to work,” said Frank.

“Me and Geraldine, stick us behind the bar and we can run it no problem.

“But in the office, we didn’t necessarily have that experience in the roles we’d been in beforehand.

“There was no point in having that steep learning curve when there was a guy sitting in the living room that had done it for decades.”

The first priority when the trio took on the lease was to build up The Pot Still’s whisky range.

At the time the pub had under 200 whiskies – an impressive number by many venues’ standards, but not even close to good enough for the Murphys.

If you haven’t got a strong enough business model you will fall by the wayside.

Working with suppliers that include Inverarity Morton and Gordon & MacPhail, independent bottlers such as Cadenhead’s and auctioneers including McTear’s, the range has steadily expanded to number around 700 bottles.

Whiskies earn their spot on the back-bar in a number of ways. Some have been requested by customers, others are personal favourites of Frank, Geraldine or one of the team.

It will come as little surprise that the pub is also approached by whisky firms with samples of new or rare bottlings, and those that meet with the approval of the team might also earn a space on the shelf.

Frank said: “[Ian Macleod Distillers] gave us a sample of the 30 year old Glengoyne. We all tried it and said yes.

“That’s a relatively high value bottle and we may have shied away from getting it in. But now we’ve tried it and we’ll easily sell it.

“If you’ve tried it yourself it’s much easier to sell it.”

And at least once a year the Murphys will tour some of Scotland’s distilleries to seek out unusual bottles.

“People aren’t going to make that journey themselves, so they want to try something more exclusive or that they’re not going to find anywhere else apart from the distilleries,” said Geraldine.

With around 700 bottles at any one time, it could be expected that at least some will stay on the shelf for some time, but the Murphys said that even the rarer bottles tend to move.

“If we notice one that’s been there for a while we’ll bring it down and push it,” said Frank.

“It can be as simple as putting it on the front bar, where people can see it better, or just behind the till, which can catch peoples’ eyes.

“If we think something is a particularly tough sell then we’ll put that on a staff incentive sheet, which gets them to sell it but also gives the staff a reason to try it.

“It’s not about [forcing it at customers], but if it fits with what the customer is looking for (staff can suggest it).”

Staff incentives (including gift vouchers or a bottle of whisky) aren’t the only way staff are motivated.

Every recruit is put through the Whisky Trail course run in Glasgow by whisky writer John Lamond, and the team is also encouraged to attend the pub’s regular whisky tastings.

A staff Facebook group also keeps everyone up to date on any new whiskies, and there’s a monthly staff meeting where the team can ask questions about anything whisky-related they may be unclear on.

And it’s not just the staff that are encouraged to learn more about whisky.

Geraldine set up a ladies-only whisky club at the pub five years ago, and it has since grown to 30 members, covering a range of different age groups and whisky knowledge.

The club meets once a month to take part in a whisky-related activity, whether that’s a tasting, visiting a distillery or attending a festival.

“The whole point of the club was to keep it informal and relaxed and to have a more comfortable space to ask about whisky and learn about it rather than being in a more organised, stuffy setting,” said Geraldine.

“It’s about a bunch of friends getting together once a month to have whisky chat, rather than it being a formal club.” 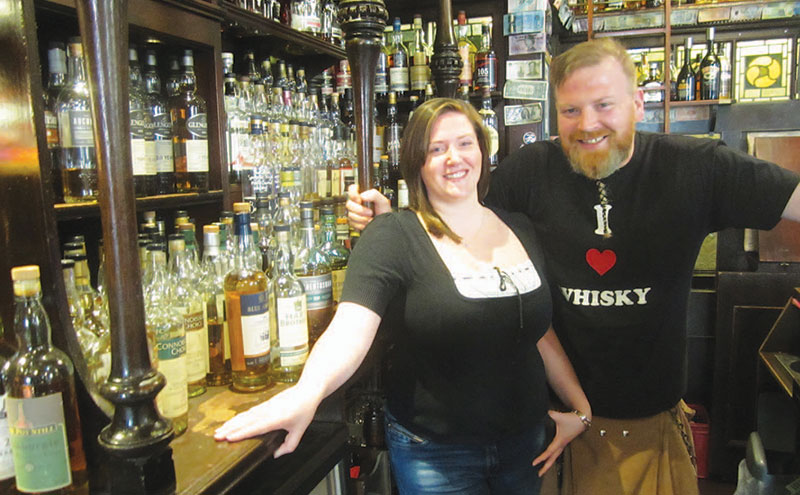 Back when the Watersons decided to position The Pot Still as a specialist whisky pub in the ‘80s, they couldn’t have known that, thirty years later, the team behind the pub would be as passionate about whisky as ever.

But that decision set the pub on a path that – under the right operators – has helped it stay competitive in an increasingly tough trade.

“If you haven’t got a strong enough business model you will fall by the wayside, because you can’t compete on price,” said Frank.

With the Murphys at the helm and whisky at its heart, The Pot Still looks as strong as ever.