FAODAIL translates from Scots Gaelic as ‘a lucky find’ – a fitting name, then, for a restaurant tucked away down a narrow lane within the Fife town of Kincardine.

In fact, first-time operators Hannah Trickett and Michael Walsh only came across the property, in which Scottish scientist and vacuum flask inventor Sir James Dewar was born in 1842, by chance during their search for a pub.

It proved a fortuitous find for Hannah and Michael – a veterinary nurse and chef respectively – who decided to strike out on their own late last year.

“We’d just been at my mum and dad’s over Christmas and they said why don’t you do it… and it snowballed from there,” said Hannah.

The unit, which had been empty for three years and before that traded as The Unicorn, ticked a lot of boxes for Hannah and Michael, who had been searching for a property with character.

At 72 covers, it was, however, a bigger premises than they had intended.

And time was not on their side.

We’re just trying to give a reason for people to come back to Kincardine.

Having decided to open Faodail’s doors on March 5, just six weeks from when they first viewed the unit and secured the lease, unforeseen delays meant the couple got the keys less than a week before their planned opening date.

So it was all hands to the pump, with both sides of the family rolling up their sleeves to bring the unit up to code in time for the launch.

“It was so rushed,” said Hannah. 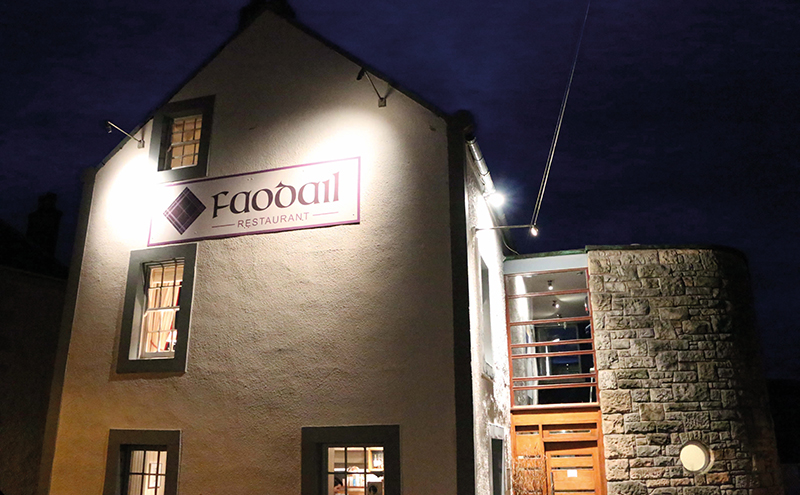 “My step-dad, he’s a builder, was in telling us what needed done, what could wait, getting insurers out, getting [the] fire regs done.”

Big-ticket items, including the oven, fridge freezer and fryers, also had to be purchased.

For Hannah and Michael, it was a lot of expense to incur so early on.

“It’s a lot when you’re starting with absolutely nothing,” said Hannah.

“Obviously we had no clientele, we had nothing.”

Fundamental to building the business was the food offer.

For chef Michael, whose experience includes a stint at The Carnock Inn in Dunfermline, it was a chance to pursue his own menu ideas.

“It’s just about catering to everyone,” he said.

“We do specials at the weekend, just so that everyone is catered for; [whether] you want something fancy or something simple.”

Describing the food as “Scottish with a twist”, Hannah explained that sourcing quality produce has been crucial; and the couple works with a number of local suppliers, including John Henderson (butcher meat), Aberdeenshire Larder (chicken), Total Produce (milk and vegetables) and a specialist local fishmonger.

There has been a lot of things sent to try us; but we’re still here.

Working with Inverarity Morton, Hannah and Michael offer Stella Artois and West’s St Mungo on tap alongside an assortment of Scottish craft spirits, with a focus on gin.

It’s an offer that seems to be going down well.

While Hannah and Michael had planned to manage the venue on their own, after just a month of trading the couple hired seven members of staff to keep up with demand.

“From the Friday night that we opened, we’ve been fully booked every weekend and it’s not stopped; it’s just getting busier, which is good,” said Hannah.

“The locals have been phenomenal.

“There’s been a lot of things sent to try us, but we’re still here. We’re just trying to [give] a reason for people to come back to Kincardine.”