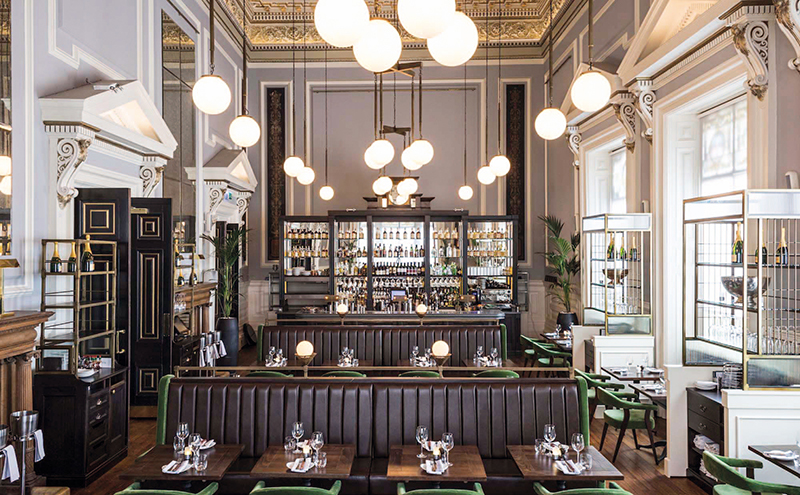 UNIQUE can be a word that falls victim to over-use. However, it’s entirely apt in the case of Glasgow bar and restaurant Hutchesons.

Constructed in 1802 as Hutchesons Hospital, the Grade A listed building on Ingram Street is full of intricate, ornate period features that set it apart from the average venue.

And while there’s no shortage of benefits to occupying such a visually-impressive space, the outlet’s operators are fully aware of the importance of respecting the building’s heritage when making any changes to the design.

Conceding that there are “few buildings like this in the UK let alone Glasgow”, Gordon McGuire of Rusk & Rusk – the group founded by James and Louise Rusk which also owns Glasgow outlets The Butchershop and The Spanish Butcher – said the company was well aware that great care had to be taken to ensure any interior changes complemented the historic building’s features.

But then the Rusks are well-versed in sympathetic design.

Having taken on the property in 2014, when the building had fallen into disrepair after lying empty since 2008, the couple carried out a £1.4 million refurbishment to create Hutchesons.

We designed it in a way to accentuate its history and really champion its core beauty.

Now, three years on, they decided that the time was right for a revamp, which would again retain and celebrate the unique and impressive surroundings that remain central to Hutchesons’ identity.

And once again, the couple tread carefully when it came to interior design.

“You’re working with such a beautiful building which has got such historic value, there’s an element of pressure to get that right,” said Gordon.

“But we were confident with the way we were doing it: treating the building with respect, designing it in a way to accentuate its history and really champion its core beauty, because it’s a stunning building – there’s nothing like it.” 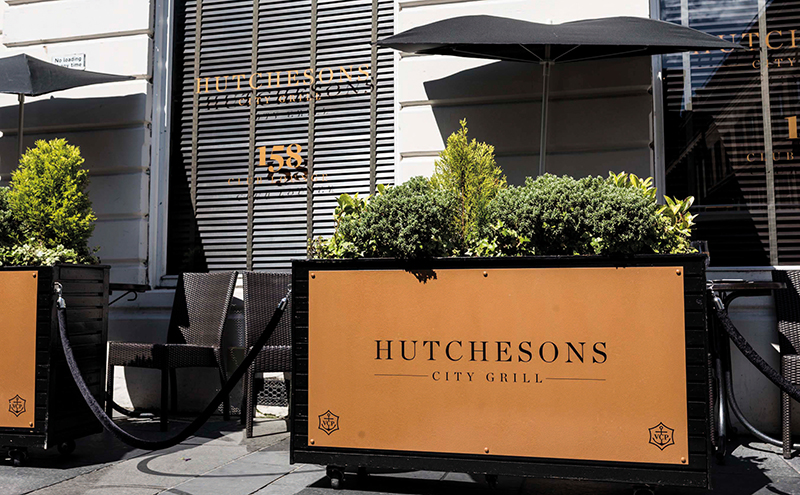 “In terms of decor, the room is vastly different,” said Gordon.

“We’ve kept the integral architecture and really tried to accentuate that as much as possible.

“The ground level aesthetics have really been developed. We just feel it’s a little bit warmer [now]; it creates a better atmosphere the way it’s set up just now.”

New signage, created and supplied by Glasgow-based FX Signs, has been installed throughout the venue.

And, downstairs, the ground floor bar area has also been revamped.

Chief amongst the changes was creating a separate identity for the bar.

Named the Club 158 Lounge, it features similar green seating to upstairs – but the design likeness ends there.

Wooden slatted blinds, a black ceiling and the dark wooden panelling have been paired with the original fireplace and plants to create an intimate space which has an altogether different ambience to the main dining area.

“You can come in here for drinks before you go upstairs for dinner, but equally you can just come in here and have an awesome night; it’s a cool hub,” said Gordon.

People talk about London, Manhattan, Sydney as these great destinations – why not Glasgow?

Ultimately, while the revamp involved months of planning and co-ordination, it’s thanks to the great relationships that James and Louise have formed with designers, architects and contractors that the physical work was able to be completed in just a couple of weeks.

Gordon said: “One of the challenges is trying to fit it in at the right time.

“We worked with a great architectural company, great contractors.

“It comes back to great relationships; they knew the job in hand, we knew what it was, and we just worked very diligently in making sure the infrastructure [was there] in order to develop that change and make it all as seamless as possible.

“It’s that sort of iceberg mentality; [it] looks quite small on top but underneath [there’s] a lot of things going on.”

It’s not just the interior that was given an overhaul – with the food and drinks menus also privy to an update.

Self-proclaimed masters of steak, Rusk & Rusk has bolstered Hutchesons’ beef range – with every cut of steak on offer said to be dry-aged on the bone for at least 35 days.

But there’s been a greater focus on Scottish produce generally, with Gordon explaining that the contrast between the menu then and now “really shows that we’ve taken a leap forward in terms of innovation in Scottish produce – trying to present it in a really fresh light”.

“There’s so much competition now for great Scottish produce – there’s so many restaurants doing a great job with it – but we wanted to do it our own way,” said Gordon.

And he reckons relationships with suppliers like John Gilmour Butchers and Cairnhill Farm help set Hutchesons apart from the competition.

“We use the same suppliers across the company now; that ensures that we’re consistent in the product we’re delivering,” he said.

“We’ve built up a really close relationship with our suppliers. We know our butchers, they know what we want, they know how we like our cuts; and that’s developed over the years, from working with them when The Butchershop first opened right the way through to where we’re at now.”

When it comes to drinks, Gordon said that while Hutchesons still has a Champagne focus, there’s more variety than before – specifically when it comes to wine and cocktails.

Acknowledging that Glasgow’s food and drinks scene has changed hugely in recent years, Gordon reckons the city can be considered amongst other top destinations – with Hutchesons at the fore.

“We’ve got some of the best restaurants, we’ve got phenomenal vision, we’re a city that’s just inherently creative – we want to be real pioneers leading that charge.

“Glasgow has rid itself of the shackles of just being Glasgow – it’s now a globally-recognised city.

“We want to be at the forefront.”