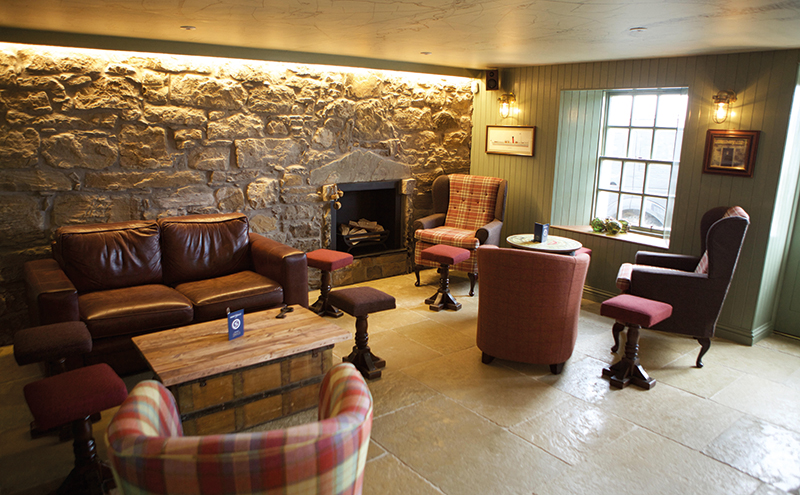 IF you had asked Graham and Rachel Bucknall a decade ago what they would be doing in ten years’ time, owning a pub certainly wouldn’t have figured.

But life has a habit of changing; and the former investment banker and his wife now have three venues to their name – The Bridge Inn in Ratho, near Edinburgh, and Fife outlets The Ship Inn in Elie and The 19th Hole in nearby Earlsferry – with ambitions to add further outlets to their portfolio.

When SLTN catches up with Graham at The Ship Inn – two years to the day since it reopened following a major refurb – there’s a steady stream of people coming in to the beach-side outlet.

This sort of buzz on what was an overcast Monday morning is testament to the vision and hard work of the Bucknalls, although Graham is quick to point out that it hasn’t all been plain sailing, explaining that they have overcome a number of challenges since they embarked on their trade journey seven years ago with the acquisition of The Bridge Inn in Ratho.

“We were the classic midlife crisis; we basically bought our local,” Graham told SLTN.

“We were running it ourselves and it was a steep learning curve.”

A little over a year in, the couple decided the time was right for a refurbishment and, over a six-month period, spent £500,000 transforming the pub, which sits on the bank of the Union Canal.

It was a major project, which involved re-roofing the property, constructing a canal-side terrace and transforming a first-floor flat into four letting bedrooms – not to mention a root and branch revamp of the bar and dining areas; but the investment paid off.

“It was the first time we had worked together, our first business in this trade and we both got hooked,” said Graham.

“The numbers started to come through, we were making a profit and that gave us confidence. I think if you wait until you get one absolutely right before you move on you’d still be there 30 years later.”

We were the classic midlife crisis; we bought our local.

In fact, it was just three years after completing the revamp of The Bridge Inn that the couple acquired Fife outlets The Ship Inn and The 19th Hole (formerly The Golf Tavern).

The Bucknalls knew the area well, having visited the East Neuk many times over the years; keen cricketer Graham had even played in matches on Elie beach – home ground of The Ship Inn Cricket Club.

And they had ambitious plans to transform The Ship by extending it into the empty property next door and former owner’s accommodation above to add letting rooms.

Following their acquisition of the two pubs in October 2014, the plan was to get one summer under their belts before embarking on the project at The Ship at the tail end of 2015; but, again, plans changed.

So with a manager in place at The Bridge Inn (an hour’s drive from The Ship) to allow the couple to relinquish their hands-on roles, they closed the doors of the Elie pub on January 3, 2015 and work on the revamp got underway.

The project, completed in time for the weekend of the Open Championship in St Andrews in July 2015, was not without its challenges.

Steel beams had to be installed between floors, gas and electricity supplies needed upgrading, and the roof required work – all of which added to the budget and timescale.

Internally, a new 24-cover restaurant and one of the six letting rooms were created on the ground floor of the neighbouring property, while part of the first-floor former owner’s accommodation (above the bar and restaurant) was transformed into a 36-cover restaurant with views across the bay to Earlsferry. The remaining five letting rooms (created in a second phase of work between November 2015 and March 2016) occupy the first and second floors of the adjoining property.

Given The Ship Inn’s location, perched on the edge of the beach with sweeping views across Elie Bay, it would have been easy to adopt a full-on seaside theme throughout.

Instead, Rachel worked with a designer to create an interior which marries some of the 1832 building’s original features with a fresh new look and subtle nautical references.

In the bar area, an exposed stone wall, fireplace, tongue and groove wall panelling and flagstone flooring have been paired with ship’s lantern-style light fittings, wooden oars and an old map of the Elie coastline painted on the ceiling; while the bar itself is dark wood with knotted rope light features.

Subtle nautical references continue in both the ground and first-floor restaurant areas, both of which feature fresh white and blue decor, ship’s lantern-style lights and The Ship Inn’s ‘S’ porthole-style logo (similar to that of sister outlet The Bridge Inn) on glass; the bedrooms also feature subtle seaside references alongside the likes of Nespresso coffee machines and Bose sound systems.

There’s also a taste of the sea on the menu, with dishes like squid, shell-on Scottish langoustine tails and East Neuk lobster taco alongside local haddock and chips, steaks and burgers.

Combined with the new-look interior, it’s an offer that’s going down well with locals and tourists alike, according to Graham.

“The restaurant has transformed the business for us; and that was the risky bit,” he said.

“We knew the pub would be busy but the challenge for us was whether we could get the restaurant to stand on its own two feet all year.

“It has definitely helped the shoulder months and off-season; and the weekends are great.”

And the Bucknalls aren’t finished with The Ship Inn yet.

Outside, where they have already created an outdoor bar in the beer garden overlooking the beach, the couple has secured planning permission to build a private dining area. The 24-cover glass-fronted Ship’s Cabin, which will double as a cricket pavillion on match days, is expected to be completed in time for spring.

The Bucknalls also plan to add more rooms and restaurant space to The Bridge Inn; and they are on the lookout for further acquisitions in the east.

“We’d look to buy another that’s a similar size to this [Ship Inn],” said Graham.

“Near water would be good – I think all the best pubs I’ve been in have water outside them!

“I don’t know if I’d recommend buying your local but we definitely don’t regret it.”