IT should be one of the fun parts of the job. You have signed a contract.  You have got the keys. You have a business plan. You know what kind of food you want to serve. You have even spent days mixing paint to create the perfect celestial cerulean for the back wall.

Choosing the name – those words that frame a unit and project its identity – is supposed to be fun. But sometimes it turns out to be the toughest part of the job.

The name of The Partick Duck Club, a new addition to the culinary scene in Glasgow’s west end, did not immediately jump to the minds of owners Ross McDonald and Greig Hutcheson.

After reaching an impasse in their branding discussion, some proper research and deliberation took place.

“We knew roughly what we wanted to do with the food side of things,” said McDonald.

“We were just trying to think of a name and nothing was sticking. We decided to look into the history of the area. One of the stories that we loved was that of The Duck Club of Partick – which also tied in with what we wanted to do on the food side of things.”

The little-known tale is over two centuries old, stretching back to a time when Partick was a village way out west from the hustle and bustle of Glasgow when it was the British Empire’s ‘Second City’. A network of Glasgow worthies comprised of merchants, bankers and professors would meet in the city and venture out to Partick to frequent its Bun and Ale inn and dine on its famed sage and onion-infused roast duck with green peas, washing it down with locally brewed ale.

Their food and drink fraternity was formally declared The Duck Club of Partick, with the society’s president, William McTear’s, insatiable appetite for the dish becoming celebrated in verse by a local poet: “The ducks of Partick quake with fear, crying lord preserve us, here’s McTear.” 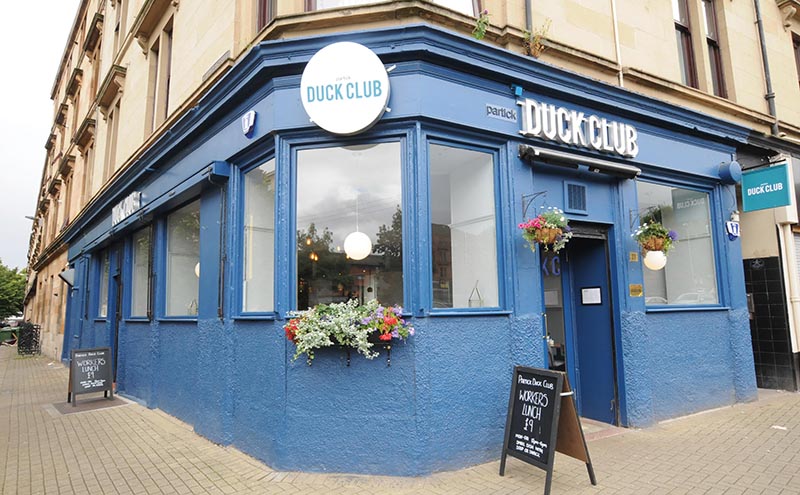 It’s helpful then that the new restaurant’s duck, supplied by wholesaler John Vallance, has gone down well with diners and critics alike.

The fowl appears on the venue’s menu several times, with its eggs available for breakfast and duck leg served with duck fat fries and pineapple chutney on the lunch and dinner menus.

There’s a few pub classics selected for inclusion in there as well.

McDonald explained that popular dishes, done well, are at the heart of the new venue.

“We want to do good familiar pub-style food well,” he said.

“We want to really elevate pub food to a higher standard.”

The directors met working in front of house roles for Glasgow restaurateur Gordon Yuill, and immediately clicked, going on to work together in restaurants that included Brian Maule at Le Chardon d’Or.

When the pair saw a chance to acquire the leasehold of The Rio Café on Hyndland Street, they wasted no time in snapping up the unit which occupies a prime location.

Situated opposite Mansfield Park, the green is just down the road from the well-heeled neighbourhood of Hyndland and links the popular areas of Partick and Hillhead.

McDonald and Hutcheson knew the area well, having worked together at Cafezique and Delizique, just 200 yards along the street.

“It’s a great area to be set up in, there’s a lot of new places opening up and, of course, a lot of famous old pubs,” said McDonald.

“There’s a lot happening, which is always the case, and I think we’re giving people another option to eating out in Finnieston.” 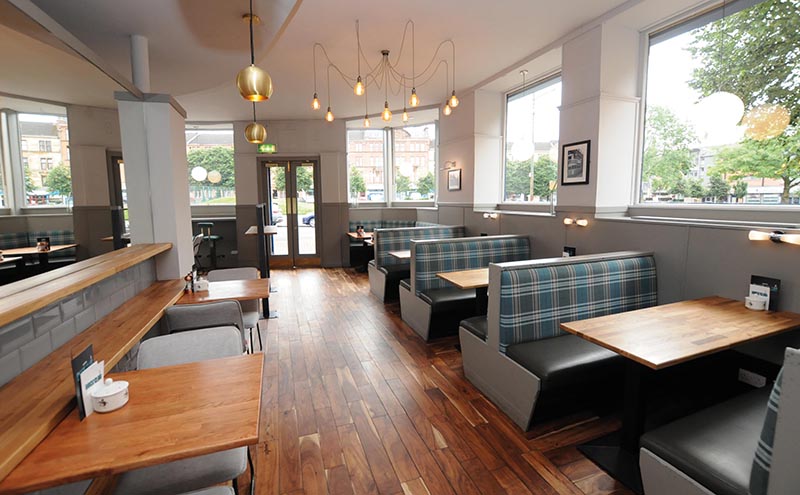 Initially the outlet was taken on under its old guise of The Rio Café but after a few days of trading the team decided it was time for a fresh start.

While The Rio had been a popular fixture in the area for over a decade, McDonald wanted to go in a new direction with the unit.

He said: “The diner was a great idea and people absolutely loved it but it changed hands a few times and it was time for a new idea. We never wanted a comprehensive concept as such, we just wanted to do good food and make it a nice place for people to come and sit.”

Award-winning design specialist Mark Brunjes of CM Design Consultants was brought in to flesh out the concept, while DW Joiners executed the plans in a brisk two-week refurbishment.

McDonald said: “It was a quick turnaround. We didn’t want to be too elaborate or too fussy. When people saw the scale of what we wanted to do they doubted it would be done in time but the builders were excellent. It’s obviously completely different to The Rio, which had a lot going on. It’s very stripped back.

“One of the really nice features we inherited was the booth seating, which we contemplated taking out. We could have got more seats in but there’s a great character to them.”

While it may sound like a straightforward renovation, significant changes have been made in the layout of the restaurant that have improved the efficiency of the operation.

A raised level for live bands was taken out to accommodate more guests.

A toilet was relocated from beside the kitchen to an area once taken up by an elongated bar, that move freed up space for a designated dishwashing area that relieved some of the pressure on the venue’s small kitchen, which benefited from a total overhaul.

“We had to open up the kitchen,” said McDonald.

“It’s a tricky wee space but all our equipment in there is brand new.

“That was one of the areas that really required a lot of investment so, because of our focus on food, we ripped it out and started again.”

With the venue now up and running, McDonald hopes the new Duck Club will earn its own place in Partick lore.

“It’s building up – our lunch and dinner services have been great and now breakfast is taking off as well,” he said.

“As we’ve worked in the area extensively we know many of the locals. There are already a lot of regulars and they are supporting the place well.”