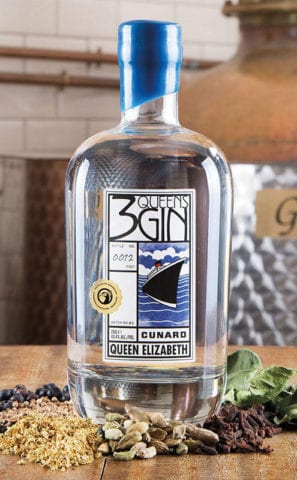 Each of the three expressions celebrates one of Cunard’s ships – the Queen Elizabeth, Queen Mary 2 and the newly-refurbished Queen Victoria, the latter of which has been installed with what’s believed to be the first gin tap at sea, pouring Pickering’s Queen Victoria Gin.

Head distiller Matt Gammell, who co-founded Pickering’s Gin with Marcus Pickering, said the three London Dry gins each celebrate a route most associated with each of the ships.

“Each of the 3 Queens Gins contains an array of remarkable botanicals, like lemon myrtle, chrysanthemum and sweet cherry, that really evoke the legacy of the ships,” he said.

Marcus Pickering said the partnership with Cunard was a dream come true as his great-uncle, George Gibbons, sailed as captain of Cunard White Star liners from 1909 to 1944. “The ability for small companies like ours to work with a globally-recognised cruise brand has been a revelation,” he said.

“It is proof that it is possible for David to play nicely with Goliath in such uncertain times, and deals like this really help to secure the future of our business.”