OFF the banks of the coastal town of Helensburgh lies the capsized MV Captayannis, keeled over on her port side.

It is said that on the night of January 27, 1974, the Greek sugar-carrying vessel dropped anchor at the Tail of the Bank in the upper Firth of Clyde to see out a storm. But, driven northwards by fierce coastal winds, it was dragged into the path of another ship’s anchor chains, subsequently tearing its hull below the waterline. Steered to shallow waters as it began to sink, the MV Captayannis eventually came to rest on a sandbank.

Naming a restaurant is like naming a child; it’s controversial.

Still visible today, and known to locals as the ‘sugar boat’, the ship has become something of an unintentional landmark for the town – and it’s this tale that inspired the name of Helensburgh’s newest restaurant, Sugar Boat.
Owner Will Smith told SLTN naming a restaurant “is like naming a child; it’s controversial”.

But the restaurateur is no stranger to controversy or challenging norms when it comes to the dining scene.
Initially working in the hotel sector, Will found his passion for food and drink and went on to become the restaurant manager at Cameron House, Loch Lomond, in 1994.

With the focus very much on formal dining at that time, it was here that his interest in food and drink really grew.
Admitting he suffered from “itchy feet” early on in his career, Will moved to the Balmoral in Edinburgh in late 1995 until 1997, before heading south to London, where he would go on to spend 20 years building his career and reputation in the city’s busy dining scene. 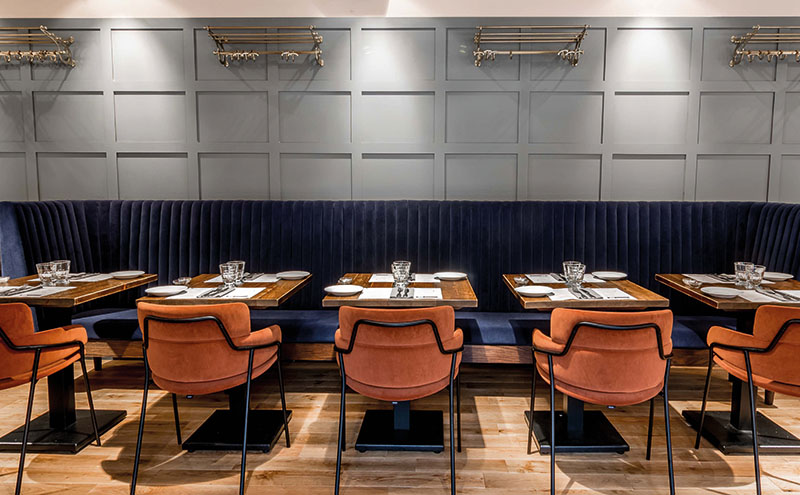 It was while working as restaurant manager of the then L’Odeon on London’s Air Street in August 1997 that Will met head chef Anthony Demetre, and the pair went on to run various eateries, including the Putney Bridge Restaurant for seven years.

While they enjoyed success, with Anthony attaining a Michelin star, Will said they grew weary of the formality, and wanted to challenge the norms of fine dining; enter, Arbutus.

Said to have been controversial at the time of opening (May 2006), Will recalled journalists at the time describing the eatery as “revolutionary” and “trailblazing”.

While its casual approach went down a storm with reviewers and customers alike, after ten years Will and Anthony decided Arbutus had run its course, and closed its doors last year.

From there, they decided to go their separate ways, with Anthony focusing his efforts on their other London restaurant, Wild Honey, and Will stepping out of the business entirely, setting his sights firmly on Scotland.
Will said he wanted some independence and a new challenge.

Free to pursue his own vision, he acquired The Buffet Shop – a deli in Helensburgh, the town in which Will had lived while working at Cameron House, and got to work transforming it into a restaurant.

Tasked with the refit was Donaldson Construction, which arranged the strip out and sub-contracted electricians, plumbers, painters and decorators and tilers.

Chief amongst the changes was the construction of a new, larger kitchen towards the front of the restaurant, with the former kitchen at the back of the premises repurposed as customer toilets.
Elsewhere, the new bar area was another important addition. 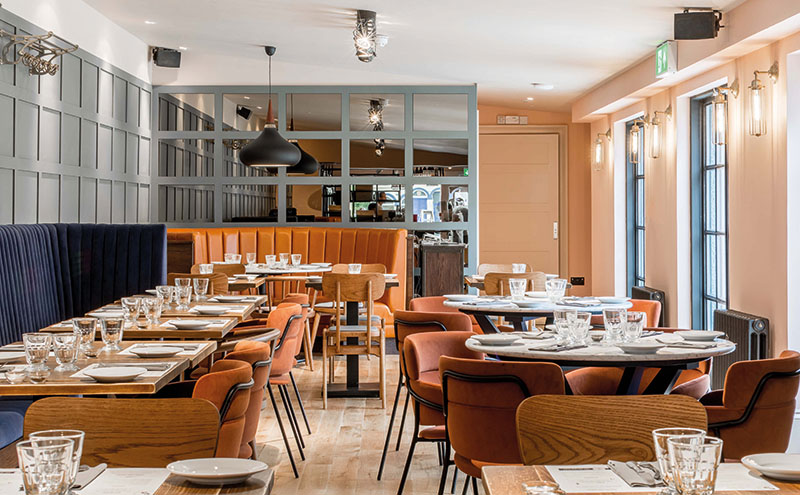 The main focal point as people enter Sugar Boat, the marble-topped island bar with impressive gantry is not conventionally-sized at more than twice the usual depth of a regular bar.
It was a deliberate design choice.

Sugar Boat also operates as an off-licence wine shop, and Will felt it was important that customers could approach the back-bar to look at the wines available.

The project was completed in just seven weeks, and Gerry Martin, quantity surveyor at Donaldson Construction, said that while it was a “tight programme” with major works undertaken, “through the hard work of our own people, our sub-contractors and the close liaison with our client and design team, we brought a very nice project to what we believe was a satisfactory conclusion”.

In terms of design, Will’s pared-back ethos that proved a hit with Arbutus is felt in Sugar Boat.
Various woods, tiles, and leathers are paired with a colour scheme of muted pinks, oranges and blues.
From the leather booth seating and cast iron radiators, to the custom-built doors towards the rear of the restaurant, there’s evidently attention to detail throughout the venue.

Will worked with Glasgow-based interior design firm Surface ID to create Sugar Boat’s interior – and the restaurateur had a clear plan.

“I had very strict instructions for my designers,” explained Will.
“One thing I said to my designer was no tartan, tweed or antlers, not even a cushion; I love tartan but we know we’re in Scotland.

“I like simplicity, I don’t like shiny things – so matt, natural, stone, wood.”
The pairing of simplicity and quality is also evident in the venue’s food offer.

With head chef Scott Smith at the helm in the kitchen, Will works primarily with Scottish suppliers, including Campbells Prime Meat and Braehead Foods; and there are plans to add further local suppliers to the list going forward.

Will reckons fresh, quality produce is key to enticing customers through the doors.
“There’s no microwave in there, there’s no freezer in there, it’s fresh produce,” he said.

“We fillet the fish, we butcher the meat and we cook it fresh to order so we’re doing real cooking.”
On the drinks side, Alliance Wines and Edinburgh-based L’Art Du Vin are used for wines, while spirits, beers and soft drinks come from Inverarity Morton.

With a total capacity of 120 covers, Sugar Boat is deceptively large – and with the online reservation system ResDiary at their fingertips, Will and his 20-strong team are ready to fill the tables.

Mike Conyers, founder of ResDiary, spoke of the benefits of online reservation systems, saying that “adding this option to your site or social media increases the chances of bookings being made”.

Whether dealing with bookings or walk-ins, Will reckons the demand is there in Helensburgh, and beyond; and he has a clear target market in sight.

“I want this to be a neighbourhood bistro – a local place where people can have a coffee and a cake or a three course banquet and everything in between,” he said.