A CATEGORY with its fair share of clichés, rum is becoming far more than just a spirit to be mixed with cola or imbibed by sailors. 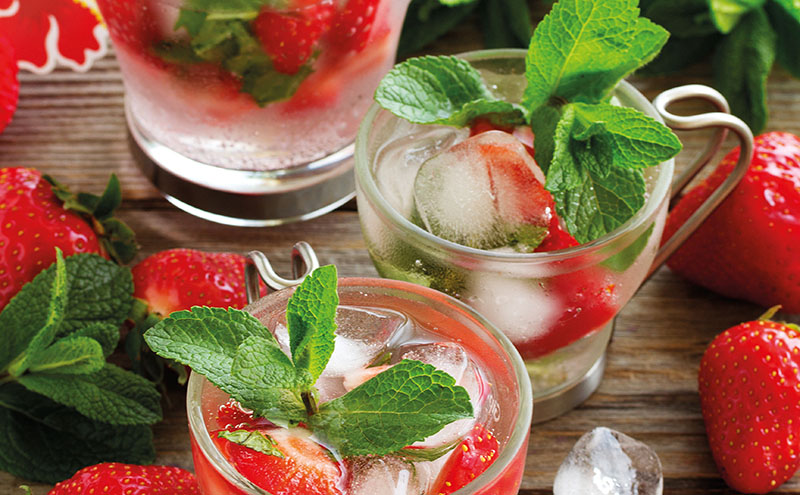 The spirit – whether white, dark, golden or spiced – is said to be performing strongly in Scotland and has played a key role in the revival of cocktails.

This month Glasgow hosted the first stop of what’s claimed to be the UK’s first travelling rum festival and several bars dedicated to the distillate have been popping up across the nation.
It seems that rum is in fashion and this trend shows no sign of going away.

Licensees can take advantage of the growing popularity of the drink by embracing just how versatile rum can be, and offering some simple serves, say drinks firms.

Faith Holland of Diageo reports that the category is now worth £626 million to the UK on-trade and that white rum now accounts for a 34% share of all cocktail serves, so it’s important to have a good knowledge of different styles and serves.

This was supported by a spokesman for Halewood Wines & Spirits, who said: “Rum, in a similar fashion to gin, is experiencing a renaissance.

Method: Add mint leaves to a highball glass, pour in the liquid ingredients adding a small scoop of ice, mix through with a bar spoon, cap with another scoop of crushed ice, garnish with the sprig of mint.

Method: Muddle lime wedges (reserving one for garnish) in a highball glass with the sugar and mint leaves. Add crushed ice until the glass is three quarters full, then pour over rum and a splash of soda. Garnish with lime wedge and sprig of mint.

“Although spiced variants continue to grow in popularity, there remains significant consumer interest in dark rums.”
According to Halewood, the growth of the category also indicates that consumers are eager to upgrade their rum and try a wider selection of premium brands, particularly if venues are able to offer the appropriate serve.
“The premium share of the market is expanding rapidly with many consumers sipping aged rums in addition to rum-based cocktails,” said the spokesman.

The invigoration of the spirit is said to have been driven by younger and more experimental drinkers, which has led to different variants and styles becoming popular.

“It is time to do the same with rum, encouraging drinkers to explore the depth and breadth of a different, but equally accessible category.

Rum, in a similar fashion to gin, is experiencing a renaissance.

“Traditionally Scotland has enjoyed dark rum and brand preference has been extremely localised, possibly due in part to the historic regionality of the docks where rum first landed.
“To this day in Hawick, Skipper Rum is the drink of choice, drunk with milk before the Common Ridings each year, whereas in Fife OVD is preferred.

“However, alternative styles and brands are now being embraced by new generations looking for something different.”

One of rum’s main strengths, say drinks firms, is its versatility.
It is adaptable to a plethora of cocktails and the unique flavour is well suited to either a taste of summer or a winter warmer.

Dan Warren, European sales and marketing director at The 86 Co, parent company of Cana Brava rum, said: “The huge variation in styles means that rum can find a place on all cocktail menus.”
Aluna Coconut’s spokeswoman also stressed the flexibility of the spirit, saying: “Rum’s warming strength and richness make it a versatile option for many cocktails.

“The diversity across styles opens up a wide range of cocktail potential that bartenders are beginning to explore outside traditional Tiki bars.”

And a wider audience is taking note, according to the Halewood Wines & Spirits spokesman.
“Consumer awareness of rum and its versatility is on the rise, with a number of specialist rum bars popping up across the UK.

Tap into this by offering rum styles which will appeal to their audience.

“Operators can tap into this trend by offering rum styles which will appeal to their audience, and encouraging consumers to try something distinctive such as a contemporary rum cocktail with a twist.”

With so much potential for mixing, there are several easy serves outlets can offer their customers.
A rare spin on classic serves can become well liked and create an exclusivity around a venue’s cocktail list, said firms.

Warren at The 86 Co believes that some of the classics will stay in the limelight.
He said: “The Daiquiri is an enduring classic that enjoys consistent popularity.

“The simple perfection of rum, lime and sugar will always be in demand and although the rum and Coke is often a poor quality mixed drink, a well made Cuba Libre can be a delicious libation.”

Halewood’s spokesman added that the Mojito “remains a popular and classic choice”.
“We recommend licensees mix it up by using a dark expression in place of a white rum, such as Rum Sixty Six mixed with fresh lime, mint, sugar and plenty of ice,” said the spokesman.