HOW to get more customers through the door is a question that can keep more than a few licensees up at night.

Plenty of pubs aim to do so by showing live sport; and one that has really intertwined its televised sports offer with the soul of the venue is The Commercial Hotel in Wishaw – winner of the 2016 SLTN Sports Bar of the Year award in association with Sky. 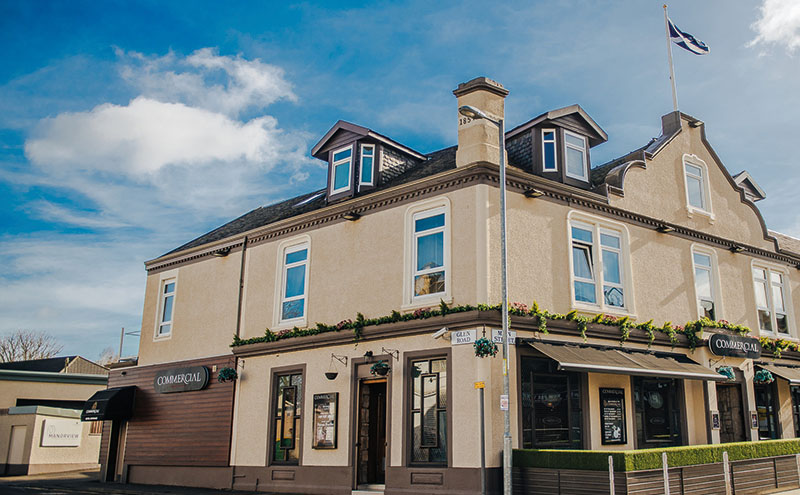 Stepping into the bar, it’s clear to see why the pub provides succour for the thirsty fan.

Sports memorabilia and TV screens are located throughout the venue and there’s a large projector that can show featured sporting events in 3D.

When it comes to live sport, no stone has been left unturned by owner Manorview Hotels & Leisure Group or by general manager Adele Montgomery.

Montgomery has worked in the bar for 36 years, and has witnessed first hand the improvements made at The Commercial since it became Manorview’s first acquisition over ten years ago.

We see a big demand for sport that’s on later in the evening.

Since then, the group has grown to operate eight hotels across Scotland but Montgomery said The Commercial has a special place in Manorview founder Steve Graham’s heart.

“When Steve came in he changed it completely,” she said.

“It went from an old man’s pub to a sports bar.

“Of course, the company has come on leaps and bounds but this is Steve’s baby, this is what started what I call the Manorview empire.

“Sport is a big thing to us. Steve has put a lot of time and money into the place, that’s the way the company is.

“It has very high standards; having said that our standards are high as well. I always say treat a place like you would treat your home.”

That philosophy seems to be paying off, with the 450-capacity venue often stowed out for a variety of major live sports events.

“The Anthony Joshua boxing match [recently] must have brought over 400 people in here,” said Montgomery.

“The atmosphere was terrific.

“We see a big demand for sport that’s on later in the evening.

“Boxing is a massive thing for us, and the area in general. We advertise it then customers will book booths, book tables, it’s always busy.”

Another tenet of The Commercial’s philosophy, Montgomery said, is to endeavour to offer something different. Whether it’s international football or the Grand National, ideas are often buzzing around about ways in which to enhance the customer experience in the bar.

“At the Grand National, we’ll dress up as jockeys and do face painting for the kids.”

The sports credentials of the bar are in no doubt.

There is a notable multi-box, multi-screen and projector system to deliver sports throughout the venue from the outside area to the ladies toilets.

The bar is ahead of the curve with social media too, using Promoted Posts on Facebook to allow for regular updates of its sports plugs to reach almost 10,000 followers.

And the offer seems to be going down well, attracting a broad range of sports fans.
“We are a family friendly pub, we don’t allow football colours,” said Montgomery.
“We’ve got our kids area; we’ve got a special TV for kids. The Grand National was as much a family fun day as anything else.

“If we can keep the kids happy, we can keep everyone happy. Mum can drop Dad and the kids off and do their shopping, then come back and get them in a couple of hours.

“When the place was an old man’s pub we had our regulars and that was it, you knew what time they’d be coming in and if they didn’t show you’d be phoning to find out what was wrong with them.
“We still have a lot of good regulars, a lot of nice friends. I would say friends rather than regulars now; they become your friends.”