JONATHAN Arthur is a bartender who has quickly made a name for himself in the past year.

Hot on the heels of placing tenth in Monkey Shoulder’s 2016 Ultimate Bartender Championship – a tournament which attracts entrants from all over the world – in New Orleans, Arthur of Bramble bar in Edinburgh followed it up by winning Courvoisier’s Toast of Paris international cocktail competition in the French capital last month with his Reunion aperitif and Demi-Monde cocktail.

SLTN caught up with Jonathan to find out more about how the prodigious mixologist ended up in the licensed trade, his favourite spirits to work with and his own drinks of choice. 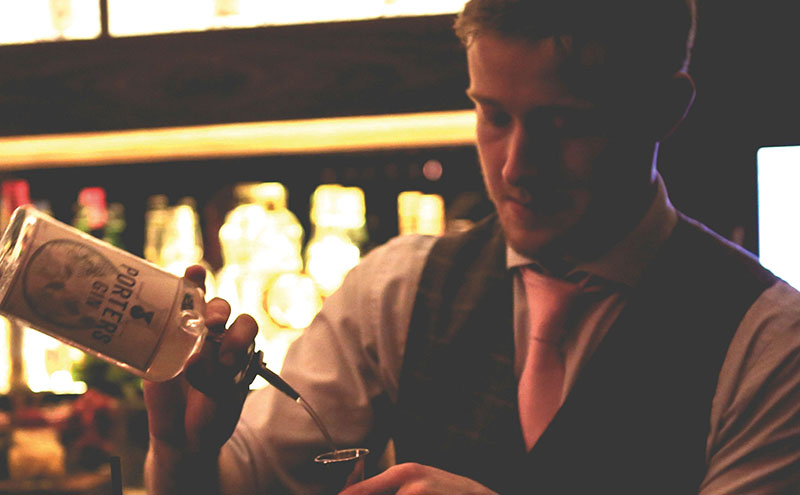 Q. How did you get into bartending?
A. Bartending is something I fell in to. I left university after two years because it just wasn’t for me. I was bar-backing in a local club at the time and asked if they would take me on full-time while I figured out what I was doing. That was nearly six years ago now.

Q. Did you immediately take to mixology?
A. It was a gradual process. The people involved in my training were quite thorough on all aspects of working in a bar, of which, making cocktails is simply one part. Once I started seeing patterns and crossover, along with getting more used to balancing drinks, it became much easier to learn.
Q. What bars did you work in before Bramble?
A. I started off properly in Amicus Apple, now closed, in Aberdeen. I worked there for four years, progressing from bar-back to bar and operations manager.
Following that I took a senior bartender role in Orchid, Aberdeen, which allowed for a lot more in the way of creative freedom in both menu creations and competitions. After nine months, my girlfriend and I moved down to Edinburgh and I started working as a bartender in the Last Word Saloon in Stockbridge (Bramble’s sister bar) and transferred up to Bramble in February.

Q. What spirits do you most enjoy using?
A. I tend to enjoy using spirits with quite pronounced flavours. Tequila and rum always make interesting drinks, especially if you can convert people with bad experiences of the product back to enjoying them.

Q. In particular, are there any Scottish spirits you like using?
A. Scotland has such a huge array and variety of spirits for such a small country. My current go-to bottles would have to be SeaWolf white rum, Porter’s Gin or any whisky from Campbeltown.
Q. What are your favourite cocktails to make and why?
A. Simple, balanced drinks. There’s a reason they’re classics, modern or otherwise. Drinks such as the Paper Plane and Corpse Reviver #2 are so simple to make and always please, as well as allowing you to introduce your guest to a drink or ingredient they wouldn’t have otherwise have ordered.

Q. How did you get involved with the Toast of Paris Competition?
A. I had a day off when Rebecca [Asseline, Courvoisier’s global ambassador] was hosting the masterclass and went along. It was incredibly interesting and once Rebecca had explained the brief and details of the competition, I decided it was something I wanted to get involved in.

Q. What are your main memories of the competition?
A. I was very well looked after at every stage of the competition, as well as meeting so many great people, however the tasting in the Paradis Cellar in the Courvoisier Chateau hosted by Patrice Pinet was one of the most amazing things I have experienced.

Q. Are your winning cocktails on the menu in Bramble?
A. We weren’t changing the cocktail menu while the competition was running so I haven’t had the chance to put them forward for that yet. We can make the Demi-Monde on request – it’s specifically designed without using too many bespoke ingredients – and a little bit of notice is all we’d need to prep everything for the Reunion.

Q. Do you feel the win has raised your profile and that of Bramble?
A. I feel it has definitely raised mine, through various circles and social media. Bramble has such a huge list of accolades from ten years it has been open that it’s awesome just to be able to add something to it.

Quality spirits can be served simply