THERE’S no denying that any investment in the on-trade carries a certain degree of risk. But, arguably, nothing quite matches the unpredictability of taking on a closed business in a derelict building.

However, when Dilys Robertson spotted the then out of business Airlie Arms Hotel in Kirriemuir was for sale two and a half years ago, she saw potential.

Following a viewing of the hotel, which had been closed for three years before it came onto the market, it became obvious that a significant level of investment would be required; and as she began to search for an investor, her dad, Barrie Ewart, who owns a car dealership in the town, decided it was a project that he was keen to be involved in.

With Dilys’ sister Nicola Ewart returning from travelling shortly after, the three began work to restore the hotel – with quality at the heart of the entire project from the outset.

One of the biggest challenges was righting the damage caused by a burst water pipe upstairs, which had leaked through the bar’s ceiling for at least two months.

“The bar that was there had almost completely disintegrated from the bottom up with the water damage,” said Barrie.

“So when we got in, the first thing we did was we sorted the plumbing and after we got that up to scratch we then had to refurbish the whole place.”

Chief amongst the works was the construction of the new bar – the design of which Dilys, who has worked in various bars and hotels over the years, worked on with local joiner Grant Matthews.

“I think we changed the drawings every day, much to his disgust,” she said.
“But eventually we got there to make it work as a functional bar, not just something that necessarily looks pretty, so that was fantastic.”

Winning the SLTN Award showed that all our hard work is paying off.

Due to the level of investment required for the refurbishment, Dilys said they “had to generate as we went”.
And so in May 2015, after seven months of renovations, the bar opened to the public; attention then turned to getting the kitchen up and running, enabling the Ewarts to introduce food in the 70-cover bar.

The refurbishment of the 55-cover restaurant and ten letting bedrooms followed, with the 100-capacity function room the final piece in the jigsaw when it opened its doors in September 2015.
All the while the family continued its focus on quality in each aspect of the operation – not just the fixtures and fittings. 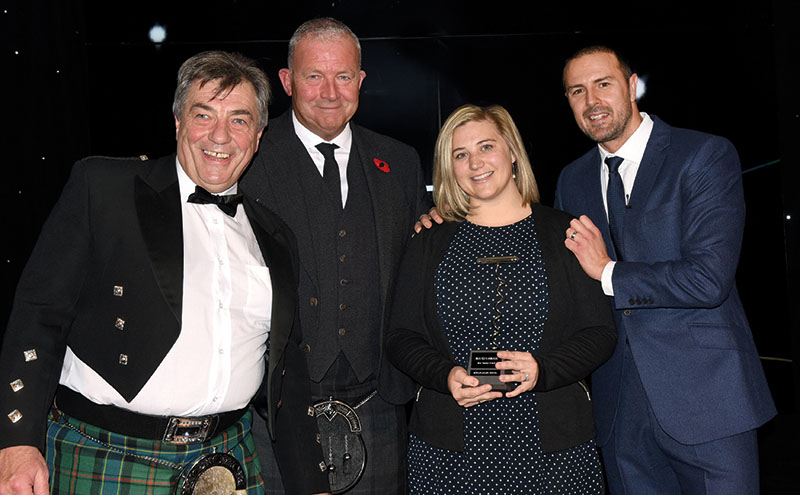 “We kind of felt that if we’re going to do something we had to do it well,” Dilys explained.
When it came to ensuring the Airlie Arms was serving quality pints, the team enrolled on Tennent’s cellar management course and, back at the bar, put in place a robust weekly line cleaning regime and a thorough training programme for the hotel’s 24 staff, which covers everything from cellar management to pouring the perfect pint and glass renovation.

Barrie, who oversees all cellar management staff training, said the approach has had an impact on the quality of draught beer being served at the Airlie Arms, whose range includes Tennent’s, Heverlee, Caledonia Best and Guinness as well as two cask ales on rotation.

The scale of the refurbishment meant it was done in stages.

“Some of the staff had never changed a keg before,” said Barrie. “If I have them on for two or three weeks on line cleaning it does bring it home to them why we do it and how to do it and where you can get it completely wrong.”
The focus on quality seems to be paying dividends.

And it impressed SLTN Awards judges, with the Airlie Arms winning the 2016 SLTN Beer Quality Award, in association with Tennent’s.

“It just felt lovely to be noticed, [that] our hard work is actually worth something and paid off,” said Dilys of the SLTN Award.

“It’s brilliant for the town itself as well; it’s a small wee town in Angus and it’s come out [from a pub] that was derelict to being turned around and saying it now serves the best pint in Scotland in 2016.”