THE Scottish cocktail scene passed a milestone last month when Edinburgh became the first city outside of the Americas to host international bartending event Tales of the Cocktail: Tales on Tour.

Comprising a series of cocktail-focused seminars and evening events across the city, Tales has been touted as a major coup for Edinburgh, and the wider Scottish cocktail scene.

With customers seemingly more interested in cocktails and mixology than ever before, there is, say drinks firms, an opportunity to make quality drinks an integral part of Scotland’s tourism offer.
“The very fact that Edinburgh was chosen for the first Tales of the Cocktail on Tour [outside America], speaks for itself,” said Dan Bolton, managing director of Hi-Spirits, the firm behind Buffalo Trace and Southern Comfort in the UK.

“Scotland has a thriving cocktail culture and there’s an opportunity to extend that success further out into the mainstream of the Scottish on-trade.
“We also see real flair and imagination from Scottish bartenders in our cocktail competitions.
“The quality of Scottish food and drink is world-renowned, and there’s definitely a tourism case for extending the reputation of the Scottish drinks industry beyond the ‘heather and weather’ image of Scotch whisky to the wider spirits culture.”

Lara Williams of Eden Mill agreed that the country’s cocktail scene is on the up, saying she believes “Scotland has carved out it’s own particular niche, mainly due to the recent surge in Scottish-based distilling”.
“We make whisky, beer, gin and rum – there’s seemingly no end to what we’re willing to chuck in a still,” said Williams.

“With this in mind, bartenders are thinking more about the regional characters that can be captured in a cocktail and experimenting with how they interact.
“Scotland is becoming known for raising the bar on how spirits are made so it makes sense for cocktail bars to follow suit. Tourists are pretty willing to immerse themselves in the local scene.  What better way for bars to encourage that than make cocktails from their favourite spirits?” 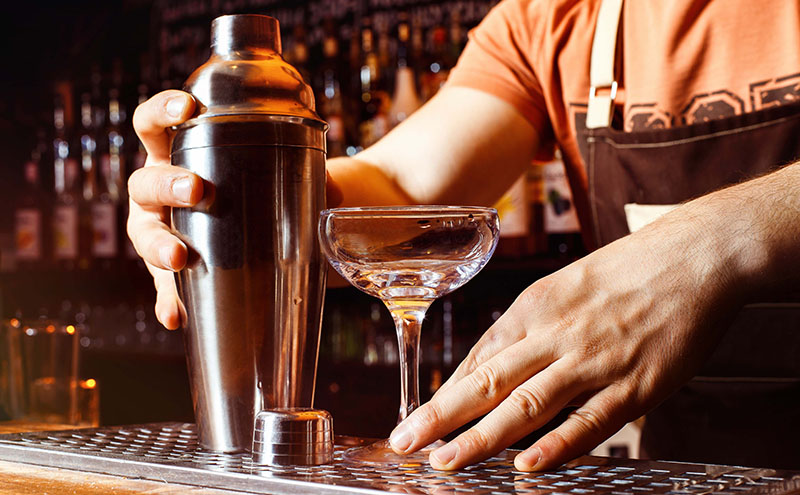 While Scotland is inarguably home to some world-class cocktail bars, not every outlet is at the cutting edge of cocktail culture, and drinks firms were keen to offer some tips on how venues with less experience can improve their offer.
Edinburgh Gin’s distillery manager, Finlay Nicol, said that “service needs to be warm and accommodating” and that “drinks should be genuinely innovative and exciting but also absolutely delicious”.
Bolton of Hi-Spirits stressed that all staff must be well trained and on the ball before attempting to serve their first cocktail to a member of the public.

“Staff should be confident with a stirrer, shaker and strainer before making cocktails for customers,” he said.
“Prep should be done at quiet times: slice and prepare fruit at the start of a busy shift and keep it in the fridge; “storing fruit slices in lemon juice keeps them looking fresh.
“And play to your strengths – it’s better to do four cocktails well than eight mediocre ones.
“Presentation is key – customers enjoying long drinks served with plenty of ice and fruit garnish, especially from point of sale such as branded mugs and mason jars, are selling your drinks offer to the next thirsty customer who walks in, as well as when your customers post on social media.”

Lindsay Blair, global brand ambassador at Daffy’s Gin, also stressed the importance of presentation and, in particular, using the right garnish.
She said: “Garnishes are a simple and efficient way to add value to drinks by increasing the drink’s appeal aesthetically.
“The attention to detail of adding fresh ingredients to a drink can impress the customers and increase perceived value for money.
“Fresh fruit and herbs also highlight the flavour and aromas to complement those present in the drink and create the sense of ‘freshness’, adding to the customers’ experience.”

With summer approaching, drinks firms highlighted several trends they said operators could expect to see in the coming months, including consumers becoming more adventurous in their tastes and also taking more of an interest in the particular back-story to their spirits and cocktails.
These trends, combined with the excitement caused by Tales of the Cocktail, led Williams of Eden Mill to speculate that there could be a significant rise in on-trade cocktail sales this summer.

She said: “Having just hosted Tales of the Cocktail earlier this year I suspect Edinburgh, and nearby cities to a lesser extent, will be on the serious cocktail-fans’ radars now.
“This alone could see a spike in cocktails as the drink for summer.
“People have seen just what our relatively small city can do and pints or carafes of wine may not cut it this time around. Drinkers are increasingly interested in the provenance of their spirits these days.

“I think cocktails with the same degree of individuality will be what shines this summer, possibly ones that show off what Scotland is making.
“Short serves with amazing spirits in them could tip the boat as people are becoming more interested in really getting to grips with what’s being distilled.”
Hannah Lawrence of whisky specialist Douglas Laing agreed, saying the company had noticed similar trends amongst consumers.

“We feel people are becoming more adventurous with what they’re willing to try and are sampling spirits and cocktails they wouldn’t necessarily have tried before,” said Lawrence.
“Consumers also want to know more about what they are drinking and how it has been made, with particular emphasis on the origin of ingredients and the production process.”

And with the possibility of more customers ordering cocktails, it could pay to have popular serves mixed up ahead of time, said Ibolya Bakos-Tonner, global brand manager for Caorunn gin.
She said that ‘pre-batching’ has become a popular way to serve cocktails quickly, adding that “even keeping a few different perfect serves can help when it comes to easing those busy periods”.