THE firm behind whisky liqueur brand Drambuie is raising a toast to the 80th anniversary of the Rusty Nail cocktail ahead of this year’s World Whisky Day (May 20).

Made with one part Drambuie and two parts Scotch, the well-known cocktail has been hailed as a formative drink for the brand, which now belongs to Scottish family-owned drinks firm William Grant & Sons.

Cocktail historian David Wondrich is said to have recorded the first appearance of the cocktail in 1937; credited to F. Benniman, the serve is said to have originally been named after the British Industries Fair – known as the ‘B.I.F’.
It then went on to assume its classic form and name, which was cemented as the Rusty Nail cocktail by chairwoman of the Drambuie Liqueur Company, Gina MacKinnon, in 1963.

William Grant & Sons acquired Drambuie in 2014, and the firm recently took the distribution of the liqueur in-house.

The new look saw the red cork cap reintroduced, as well as a refreshed logo, which was based on the bottle’s design in the 1960s; it is embossed on textured cream stock with gold foiling. 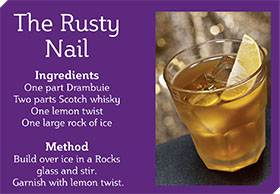 There are also said to be further plans in the pipeline for revitalising the brand this year.

Aiming to recruit a new generation of drinkers into the liqueur category, Wm Grant & Sons plans to continue with ‘Brass and Crimson’, a campaign promoting the whisky liqueur brand’s history with music through a series of events across the country.

There is also a new suggested serve, the Drambuie Collins.

Rita Greenwood, managing director of William Grant & Sons UK and Ireland, said the company is “thrilled” to have taken distribution of the brand in-house.

“Liqueurs is a dynamic category within the premium spirits market, growing by £12.5 million last year, and since Drambuie is such a unique liquid, we are thrilled to announce it has joined our portfolio,” she said.

“One of our ambitions is to grow our quality spirits offering within the market, and with 7.6 million liqueur drinkers in the UK, Drambuie is an excellent fit that complements our existing portfolio and will support our growth strategy both in the on and off-trade going forward.”