Orkney brewery has let one of its cask ales take flight in bottled format this month.
Initially launched as a cask exclusive two years ago, Puffin Ale is now available in 500ml format (pictured). 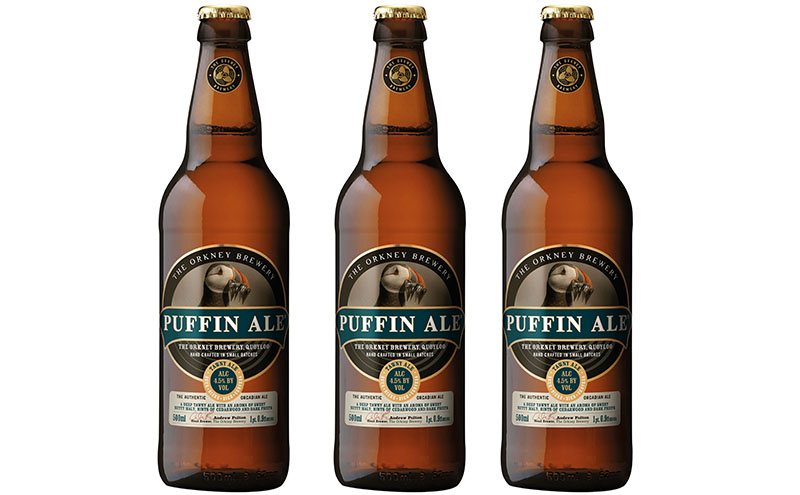 Tasting notes for the ale, which celebrates Orkney’s most iconic seabird, describe Puffin as a “tawny ale, with an aroma of sweet, nutty malt and hints of cedar wood and dark fruits”.
Orkney Brewery parent firm Sinclair Breweries said it expects the 4.5% ABV ale to “fly off the shelves”.
Norman Sinclair, managing director of Sinclair Breweries, said the team behind the beer originally thought Puffin Ale would prove most popular in “coastal and island areas”, but that demand nationwide “has been incredible”.
“Ever since we launched Puffin our customers have been asking for a bottled version, so we’re excited to now be bringing one to the market,” said Sinclair.
“The brewery team has worked very hard to capture the distinctive flavour and character of the cask Puffin in the bottled version and they’ve done a fantastic job.”
The brewery MD added that Sinclair Breweries “always appreciate feedback from our customers” and credited that kind of communication with enabling Puffin Ale to spread its wings.
“It’s that kind of enthusiasm and support which helped bring a bottled Puffin to the marketplace, so we’d like to say thanks to everyone who took the trouble to let us know how much they loved the original cask variety,” he said.
Puffin Ale joins Dark Island, Red Macgregor, Northern Light, Raven Ale, Dragonhead, Corncake, Latitude, Three Sisters, Nimbus, Skull Splitter, Orkney Gold, Clootie Dumpling and Dark Island Reserve in Orkney Brewery’s packaged range.