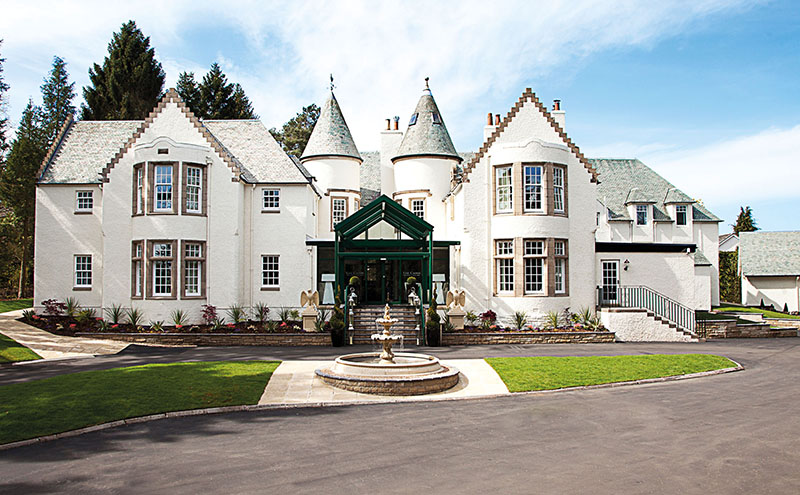 A country house hotel in the Perthshire town of Auchterarder has come on to the books of property firm Christie & Co.
Built in 1903 as a hunting lodge, Cairn Lodge Hotel is described as a substantial property featuring turrets on either side of the entrance.

The hotel comprises ten luxurious bedrooms, all featuring king size beds, Philippe Starck bathrooms and Bang & Olufsen sound systems. There’s also a lounge bar with seating for 23; a grill room and restaurant with capacity for between 60 and 80 covers; a landscaped terrace to the rear which can seat up to 80 people; and a “state-of-the-art” kitchen with Josper grill.

The hotel brings a new dimension to the market.

Adjacent to the hotel is a detached five-bedroom lodge, which is available under separate negotiation.
Stuart Drysdale, associate director at Christie & Co who is handling the sale, described the Cairn Lodge Hotel as an “outstanding business that brings a new dimension to the hospitality market in Perthshire”.
“The business offers the perfect combination of modern 21st century amenities in an easily accessible countryside location,” he said.
“Due to its close proximity to Gleneagles, the hotel experiences a high number of visitors as well as increased business in the Grill Room, which is popular with both guests, locals and passing trade from the nearby A9 trunk road.”
Offers in the region of £1.4 million are being sought for the freehold.