Marston’s has invested millions in its estate, with more to come this year

WHEN English pub and brewing giant Marston’s opened its first Scottish outlet in 2014 it was to be the start of a major push north of the border for the firm.
The company, which owns an estate of 1700 managed, leased and tenanted pubs across the UK, now operates 13 pub restaurants and one premium bar in Scotland, as well as four Marston’s Inns lodges. Speaking to SLTN, chief executive Ralph Findlay said the company has invested around £45 million in developing its Scottish estate since 2014, with a further £30m to follow across 2017 and 2018.

All 13 of the company’s Scottish pub restaurants are food-driven, family-oriented venues with a focus on value, and this format will continue to be the group’s primary focus north of the border this year and next.
“We looked at where we were successful and what was working and we looked at the Scottish market and saw a lot of similarities with places that we were being successful [in]elsewhere,” said Findlay.

We saw a chance to invest and grow in Scotland.

“We looked at the competition and felt that what we were doing was significantly better, and so we thought there was an opportunity in Scotland for us to invest and to grow. And that’s exactly what has happened.”
The pub restaurants all fall under one of three Marston’s brands: Two for One, built around two-for-one offers on food; Milestone Carvery, a traditional-style carvery restaurant with a contemporary design; and Milestone Rotisserie, where a rotisserie oven is a central aspect of the interior.

With an average spend on food of £8 a head, all three brands are focused squarely at the value end of the market. Findlay said the revenue split is roughly 60%/70% in favour of food.
“They are in that very value for money part of the market, and it’s a very simple proposition, that when we build a new pub we want it to be the best pub for miles around, and we want it to be great value so people can afford to go every week,” he said. 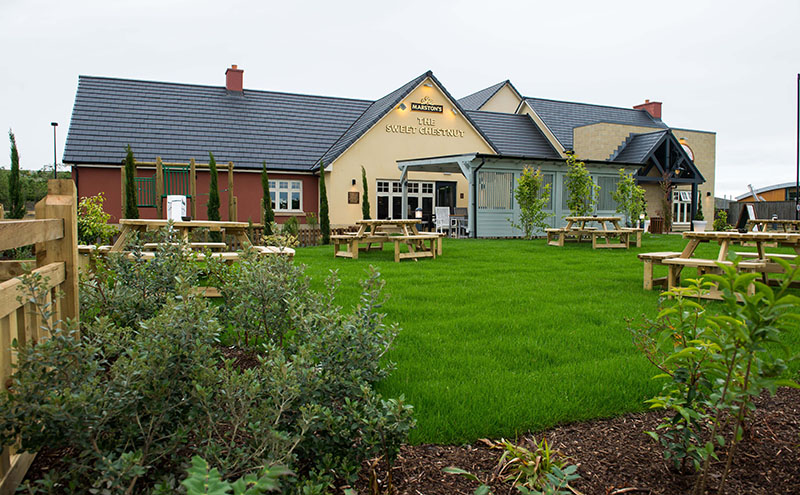 The food-heavy offer has also helped to shield the company from the impact of the lower drink drive limit, with Findlay claiming the business hasn’t seen “any significant change” in its revenues since the new limit was introduced.
This year Marston’s will open five new pub restaurants in Scotland: Livingston, Lenzie, Peterhead, Kirkcaldy and Rutherglen.

A further three – in Glenrothes, Inverness and Dalgety Bay – will follow in 2018.
All eight of these venues will fit into one of the company’s three value brands.
The expansion is unlikely to stop there.

Although the company hasn’t finalised plans yet, Findlay said there are likely to be several more inns – which are located on sites adjacent to existing pub restaurants – introduced in Scotland in the coming years.
And at the other end of the spectrum, the company may also look to open more top-end bars.
Marston’s stepped into the premium end of the market last summer with the launch of Foundry 39 in Edinburgh.
Offering more upmarket food such as gourmet burgers and pizzas as well as cocktails, world and craft beers, the outlet was opened on the site of the former Bar Roma on Queensferry Street.
More premium units could follow, either under established brands, such as the company’s Pitcher & Piano concept which has outlets across England, or more individually-branded venues like Foundry 39.

This year Marston’s will open five new sites in Scotland.

“I’m more cautious in general, across the UK, about the city centre part of the market because it has got very crowded,” said Findlay.
“There has been more investment in town centres. You will have absolutely seen that in Glasgow and Edinburgh. So we will be more careful about city centre sites, but if we see a very strong site we will be interested.”
However, the business is unlikely to test the waters of the tenanted and leased market in Scotland.
In England and Wales, Marston’s owns around 700 tenanted and leased pubs.
But Findlay was clear that the business isn’t looking to grow that estate – in Scotland or south of the border.
“I think it’s just about where we see the growth in the market,” he said.
“The UK, generally, has seen significant growth in eating out and we think that’s going to continue.
“So our strategy is just to target that growth in eating out.”