SCOTTISH distiller Dark Matter is taking drinkers to a galaxy far, far away with a new range of cocktails to celebrate the release of Rogue One: A Star Wars Story on Thursday (December 15).

A spokesman for Dark Matter said that whatever the flavour preference, “these drinks serve as the perfect preparation for Star Wars fans across galaxies far, far away and closer to home”.

“Whether you choose to follow the recipes, or pop into the bars to ask the experts to whip one up for you, these are the drinks you’re looking for,” he said.

Drinking on the Dark Side

Method
Shake all ingredients and double-strain into the glass. Garnish with smouldering cinnamon stick.

Method
Add all ingredients except chocolate syrup into a shaker; shake well and strain into chilled glass that has chocolate syrup spiral drizzle inside. Garnish with chocolate vermicelli and marzipan “wookie belt”. 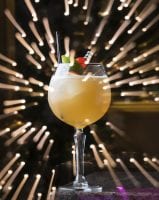 Method
Shake ingredients. Serve with an apple fan on lime wedge and cherry.