FAMILY-OWNED Scotch whisky firm Douglas Laing & Co revealed its winter line up of single cask releases last month.
With a winter theme in mind, Douglas Laing & Co has included some heavily sherry-matured malts in the range, which the firm reckons “are sure to be a warming and welcome addition on the coldest of winter nights”.
In total, 22 different casks aged between 7 and 33 years were selected from distilleries across Speyside, Islay and the Highlands. 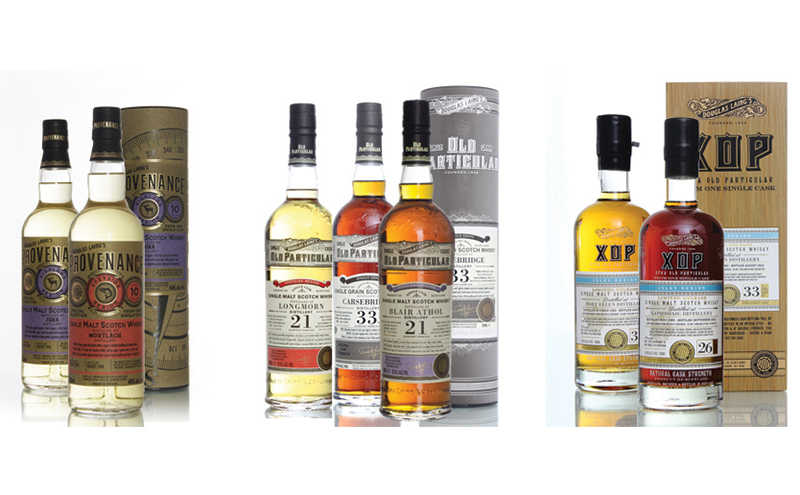 Within the Old Particular range, some of the ‘sherry bombs’ include a Blair Athol 21 Years Old, which is described as “full of spiced, dark fruits with home-baking”; a Glenrothes 12 Years Old which features “a distinctly tobacco and honeycomb character”; and a Craigellachie 21 Years Old which is said to be “bursting with macerated fruits, warming spices and treacle”.
The latest releases also feature island malts, including an Old Particular Tobermory 21 Years Old which is reportedly “packed with salted toffee, cut lemons and subtle smoke”; an Old Particular Bowmore 17 Years Old, which is described as both “spicy and sweet with smoke, caramelised oranges and peated malt”; and a Bruichladdich 25 Years Old which features “a fruity, vanilla-rich and a citrus candy character”.
Within the company’s Provenance range, the winter releases include a honey and barley-rich Glengoyne 9 Years Old, a fruity Benrinnes 8 Years Old and a Tamdhu 12 Years Old, which is described as having flavours of orange peel and vanilla cream.
Every release in the winter collection has been bottled without colouring, at high strength and is non chill-filtered “to preserve the robust and unique character of the whisky”.
“With this most recent release for the winter months, we believe we have selected some very special single casks that offer a unique insight into Scotland’s distilleries whilst bringing a warming glow to the chilliest of nights,” said owner and managing director, Fred Laing.
Douglas Laing & Co has been owned by the Laing family since its formation in 1948 by Fred Douglas Laing. It is currently owned by Fred Laing Jr and daughter Cara. The firm’s Remarkable Regional Malts range encompasses The Epicurean (Lowlands), Timorous Beastie (Highlands), Scallywag (Speyside), Rock Oyster (Islands), and Big Peat from Islay.