Revamp brings glamour of the east to Edinburgh’s George Street

A NUMBER of cities have been described as the “Paris of the east” down the years, but the melting pot of merchants and traders that was Shanghai in the 1920s gives it one of the stronger claims to the title.
It therefore makes a kind of cultural sense that the team behind the refurbishment of Shanghai nightclub on Edinburgh’s George Street should take cues from that time and place, bringing back design features often born in the old world, but refined in Asia. 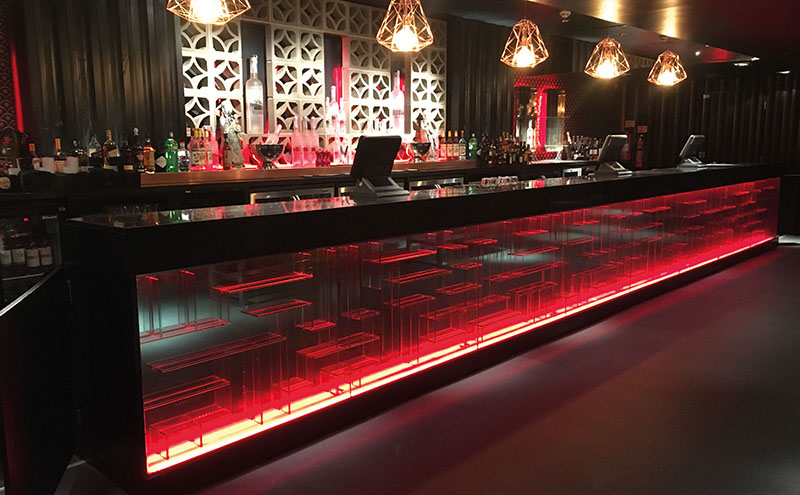 Tucked beneath the hotel and bars of Le Monde, Shanghai nightclub is trading again after a five-week refurbishment which saw the venue return in time for freshers’ week in September.
The timing of the revamp, with some of the work being carried out during the Festival month of August, presented some challenges; but the job was completed on time and Angus Alston of shopfitting contractor Hugh Stirling said the firm was “delighted to be entrusted” with turning it around.
Paul McBride, general manager of the Le Monde complex, which includes Shanghai and which Glendola Leisure bought from Saltire Taverns in summer 2015, said the revamp was a long time coming; but with like-for-like sales up nearly 70% in the first weeks of trading since the overhaul, he said it’s been worth the wait.
“We had a fabulous ten years trading out of the nightclub,” said McBride.

Creating more ‘bookable’ space in the club was one of the main priorities.

“We were always good at our own PR and marketing, we were generating good income while our competitors were heavily capital investing in their clubs.”
Evidence of Glendola Leisure’s six-figure investment in the club is visible from the off as customers descending the stairs are first met by neon lights which spell out the venue’s name in Mandarin.
Crossing the threshold the changes are clearer still. 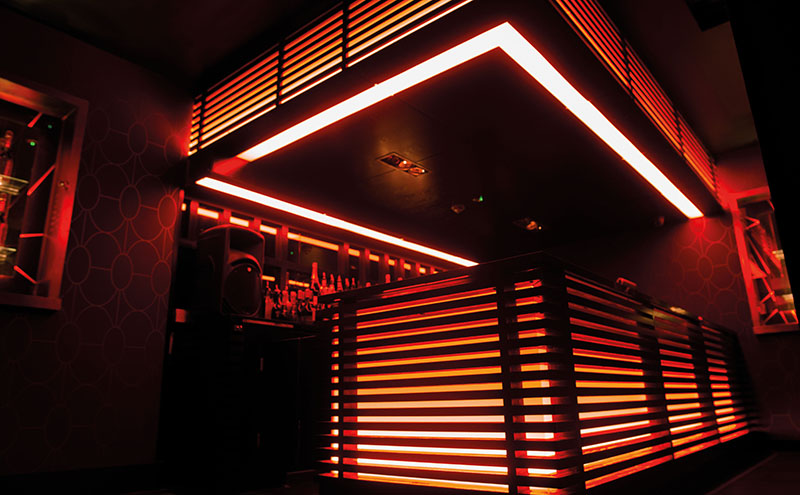 The dark bar space, which McBride said once looked like “more of a chill out room”, has been overhauled with support from LVMH to create the Moët NIR room. Incorporating the soft pink colour palette of the rosé Champagne brand, Shanghai’s first sectioned-off bar area now shines with neon light emanating from a bespoke slatted bar.
McBride said the design brief for the refurbishment was to create a “1920s Shanghai kind of feel”; and while that doesn’t extend to the drinks menu, there are nods to the orient throughout.
Nicholas Russell of Edinburgh-based architects JA Leask said the intention of the revamp was twofold.
“Firstly we had to establish a strong theme”, Russell said, “then provide an updated space that would enhance the dance floor experience.
“As the club initially was not doing anything to suggest a ‘Shanghai’ look or feel we looked directly to the city of Shanghai for inspiration to develop the concept.
“We discovered Shanghai was the focal point of an eastern renaissance where traditional eastern cultures began to be influenced by contemporary western cultures –creating what became known as ‘Haipai’ or ‘east meets west’ culture.”
The interplay between east and west is striking in Shanghai’s main room, which juxtaposes the old with the new.
The back-bar has been rebuilt using oriental-style concrete blocks which are lit by red LEDs; and accompanying the plethora of premium spirits on display are a few solemn statuettes which speak to China’s more ancient past. Possibly the most innovative piece of Chinese iconography on display is a screen to the rear of Shanghai’s main room which, at first glance, appears to be a poster of a woman in early 20th century Chinese attire. 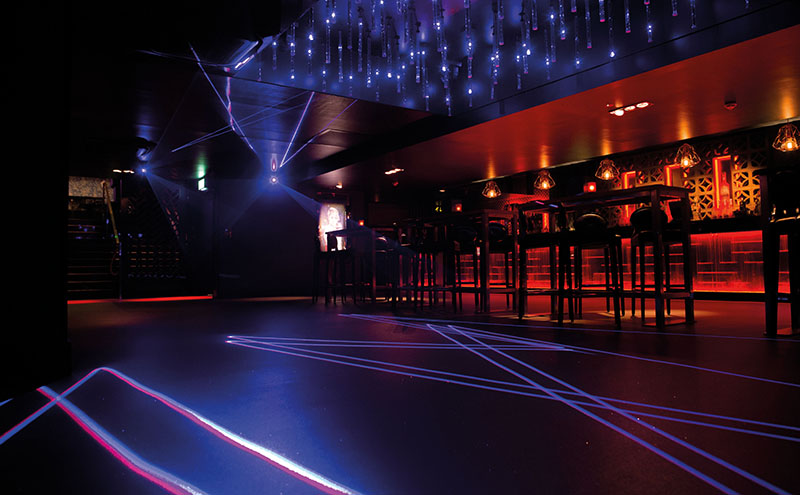 However, if guests watch the screen for more than a moment, the woman comes to life in stop motion animation-style, blowing a kiss or giving a wink.
Shanghai’s moving portrait isn’t the only innovative piece of tech on display either; the venue’s lighting system has also been given a major upgrade.
Suspended above the main dancefloor, a specialist Madrix lighting system has been installed which allows a set of 50 LEDs to be controlled from the DJ booth along with a cycle of laser and smoke effects.
The DJ booth itself has also been moved across the floor, allowing contractor Hugh Stirling to build four new booths for the room, creating more ‘bookable’ space – a major focus for post-revamp Shanghai.
“It’s all about sellable space now,” said McBride.
“We tried to get a cool design element in, good lighting features and really good seating bars and table package areas to cater to the VIP market.”
To the rear of the club and up a small flight of stairs is Shanghai’s most exclusive spot: a VIP area complete with private bar – and it’s also been overhauled.
“[With] the VIP bar again we’ve created a bit more space; we’ve taken a bit off the bar,” said McBride.
“It’s more luxurious. The fixed leather seating and expensive new tables add to the table package experience.”
Shanghai’s revamp seems to have created the right environment for premium table packages, and the venue backs it up with a drinks list that’s also been given a premium overhaul.
Glendola Leisure worked with its suppliers to source eye-catching serving vessels to accompany premium brands including LED-lit Moët NIR bottles as well as Diageo’s innovative Cîroc wheel and a Belvedere aeroplane that’s ‘flown’ out to customers by staff – both of which turn heads thanks to the addition of sparklers.
One of the cleverest additions to the new-look Shanghai is also found on the drinks menu, but it’s not something customers can imbibe.
The drinks list now glows in the dark thanks to subtle ultraviolet light that is dispersed throughout the club and which triggers a special ink on the menu, ensuring the drinks list –including the venue’s six new oriental-themed cocktails – remain visible.
With the refurbishment complete and a new team of 30 staff on board to cater to the 500-odd customers who fill the venue on club nights, the future is looking good for Shanghai, according to McBride.
And while nightclubs have undoubtedly had a tougher time of it in recent years, the Le Monde GM reckons the way this revamp has been completed leaves options open for the space.
“The beauty of our investment is that [should the market shift] we’ve still got a cracking late night bar,” said McBride.
“If there’s a club renaissance, we’ve got it, the belt and braces are there.
“Hopefully it’s a bit of a win-win.”
Since opening its doors again, the nightclub has returned to trading five nights a week, which would be enough for some, but not for the team at Shanghai.
“We’re also keen to get the exposure of the space; not just between 11pm and 3am, but to be used,” added McBride. “George Street is prime real estate in Scotland and you can have [to yourself] one of the best private bars in the city depending on the nature of your function.”