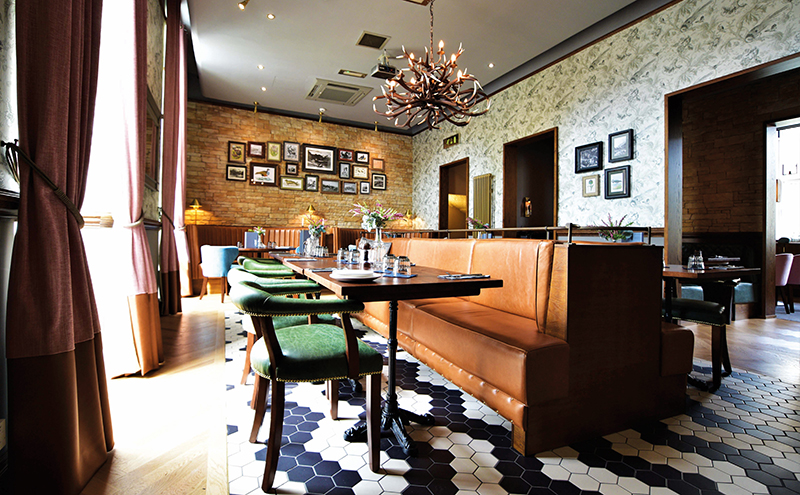 IT’S not often that a neighbouring bar’s name directly inspires another; but that was the case in St Andrews when the West Port Bar & Kitchen – positioned directly across from recently-opened bar Rogue on South Street – went through a root and branch refurbishment and reopened as The Saint in June this year.

Speaking to SLTN, Louise Maclean, director of sales and marketing at Signature Pub Group, which counts The Saint within its 24-strong portfolio of bars and restaurants, explained that the idea came to Signature boss Nic Wood while planning the refurbishment.

“The Saint was the easiest pub we’ve ever named,” said Louise.

“Nic came up with it himself; we were sitting in the West Port and right across from the bar, Rogue was opening and I was saying, ‘it’d be great if we could do something that would attract people up this end of town’ – and it just came to Nic.

“He was like ‘well, The Saint – we’re in St Andrews, we’re opposite Rogue; what’s the opposite of Rogue?’”

And the juxtaposition of good and bad goes beyond the name, serving as inspiration for the venue’s refreshed food and drinks menus, which give customers the option to be a ‘saint’ or a ‘sinner’; in other words, offering the choice between healthier options and more indulgent treats.

However, while the inspired name proved most fortuitous, the refurbishment had been a long time coming for the St Andrews unit.

Louise admitted that a refit of the venue, which was acquired by Signature from the now defunct Maclay Inns back in November 2015, had been on the cards for a while.

“We knew we always wanted to do a refurb, not from the minute we got it because actually it was in a really good place when we bought it,” said Louise.

The Saint was the easiest pub we’ve ever named; Nic came up with it himself.

“It was about finding the right scheme; it was about making sure we were on-trend without trying to create a trend with the design.”

Working once more with design and architectural consultant firm, Tibbatts Abel, which was most recently involved with the redesign of Signature’s Church on the Hill in Glasgow, Louise said this was one of the most debated designs yet.

“So it had to be a [design] scheme that was accessible for all, but not overly designed that you were putting anybody off.”

Key to achieving this was bringing about greater flexibility throughout the 152-capacity venue.

For instance, the 16-cover private dining space can now be altered to suit a larger private party or it can accommodate multiple, smaller tables.

This approach also ensures that various spots throughout the venue, including its 66-cover restaurant, offer some level of privacy, yet customers “still feel like part of the party”, according to Louise.

The design, which utilises a raft of premium materials – from the mix of wood and stone adorning the walls and floors, to the contrasting darker booths and plush, pastel seating – is underpinned by Scottish influences, with various pieces of artwork and ‘bric a brac’ elements featuring throughout.

The refurb also extends to The Saint’s four letting rooms, as well as its 50-capacity beer garden.

Tasked with carrying out the sizeable revamp was shopfitting contractor Hugh Stirling, which, as the main contractor for the project, was responsible for co-ordinating all aspects of the refit.

Louise said working with the team, which completed the work within five weeks over May and June this year, was “all very harmonious”.

We want it to be somewhere people come to and think, ‘when can I come back here?’

Beyond design changes, The Saint’s food and drinks offer has been overhauled too.

With a focus on local produce, the kitchen team at The Saint work with various local suppliers, including the likes of Minick of St Andrews (butcher meat), Puddledub (breakfast meat), Barnett’s Bakery (bread), I J Mellis (cheese) and the Wee Tea Company (tea).

The Saint even has its own chicken coop, with six resident hens – Henrietta, Hen Solo, Dusty, Tilly, Maisie, and Pearl – supplying the restaurant with fresh eggs daily.

“We did an online competition to name them,” said Louise.

“It was just about how to be different, how to show that you do practice what you preach and it is all about local produce – and you don’t get much more local.”

This approach is mirrored in The Saint’s drinks range too – with Signature’s Cold Town Beer, which comes fresh from the group’s recently-launched Edinburgh brewery, front and centre on tap.

With variety key, Estrella, Guinness, Heineken, Coast to Coast, Orchard Thieves Cider, and Kona Big Wave Golden Ale are also on draught, as well as a brew from Stewart Brewing. 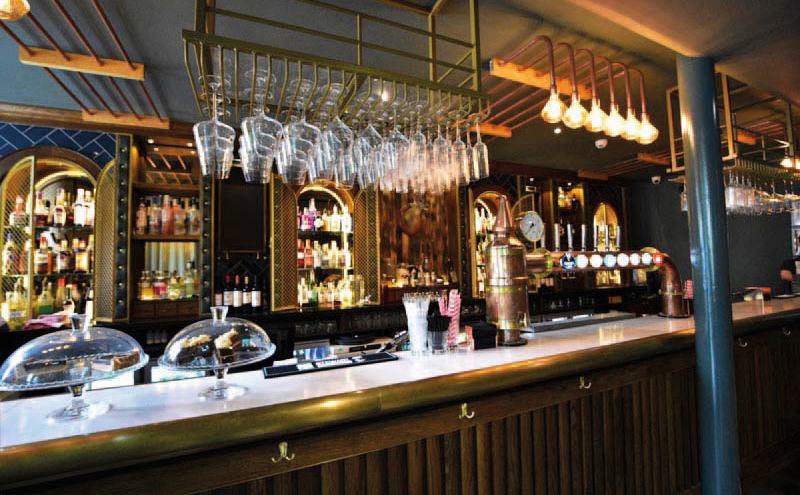 “AS the main contractors for the refurbishment of The Saint, shopfitting contractor Hugh Stirling was responsible for co-ordinating all aspects of the fit, with most of the building work carried out by our in-house team of joiners, decorators, plumbers and builders.

“The bar and back gantry is a tremendous feature, with a complex interface of curved hardwood, mirror, ornate metal work, tiles and marble. This was virtually fully manufactured in our workshop, dismantled and then re-assembled on site.

“The project lasted five weeks and was handed over on time, ready for the critical St Andrews summer season.”

Cocktails are a big focus for the revamped bar. Developed by Dave Race, who works within Signature’s operations team, the list is built around the classics – with a few “unique” takes on the traditional serves thrown in for good measure.

“It’s a cocktail list which makes you want to sit and have a second,” said Louise.

While relaunched venues often enjoy a ‘honeymoon period’, The Saint continues to go down a storm with customers, according to Louise.

“The hope would be to re-establish this part of town as somewhere to go as a destination venue for dinner and drinks with your family,” she said.

“It doesn’t have to be bursting at the seams every night of the week, but we just want it to be somewhere that people come to and think, ‘when can I come back here?’”