THOSE who suffer from Coeliac Disease, or any intolerance to gluten, are forced to bypass a lot of popular products. Pasta, cakes, pancakes and bread are all to be avoided.

But by far one of the biggest blows to a traditional gluten-free diet is the inability to drink beer.
It’s this issue that has given rise to a new crop of gluten-free beers in recent times, but one Edinburgh brewery has gone a step further. Bellfield Brewery began producing its beers in March this year, billing itself as the UK’s first entirely gluten-free brewer.

A first year can be tough. I think it’s looking rosy.

The production side of the venture, which was set up by a group of friends from Portobello who are either Coeliacs themselves or have spouses that are, is helmed by manager and brewer Kieran Middleton.
A former home-brewer who honed his skills working at Edinburgh craft brewery Barney’s Beer, Middleton was recruited with the brief to create beer that was entirely gluten-free.
It was a challenging task.
A common practice in producing this style of beer is to follow the regular brewing process and, during fermentation, add an enzyme that breaks down gluten proteins.
However, the Bellfield founders were keen that gluten be excluded at as early a stage as possible.
“If you’re a Coeliac you don’t want to be taking anything that might do you harm,” Middleton told SLTN.
“You don’t want to run the risk. Our base point from day one was to make a beer that was going to be safe for Coeliacs, which didn’t involve shattering any proteins down to miniscule levels.”
It took more than a year of research and experimentation, including work with Heriot -Watt University, but the end result is two beers that have been certified gluten-free by Coeliac UK.
“Every stage I go through I make sure we’ve taken steps to take as much gluten out of the beer as possible,” Middleton told SLTN.
“There’s various things we do along the way, some of which I can’t say too much about.
“It’s basically a natural process, and we’re working with raw, natural ingredients.

The beers stand up in their own right.

“There’s nothing manufactured, it’s just what’s out there in the market and we’re using it in a particular method and a particular way to give us satisfaction that it’s gluten-free at the point of delivery.”
Since launching in March, the two beers – Bohemian Pilsner and Lawless Village IPA (both 4.5% ABV) – have secured listings in around 100 outlets across Scotland, including bars in Glasgow, Edinburgh, Aviemore and Irvine.
The beers are also stocked by wholesalers Inverarity Morton and Gordon & MacPhail, and the company is in talks with a national distributor with a view to extending its reach across the UK.
Though the beers have been produced in keg format, Middleton said the company’s main focus is on its packaged product. 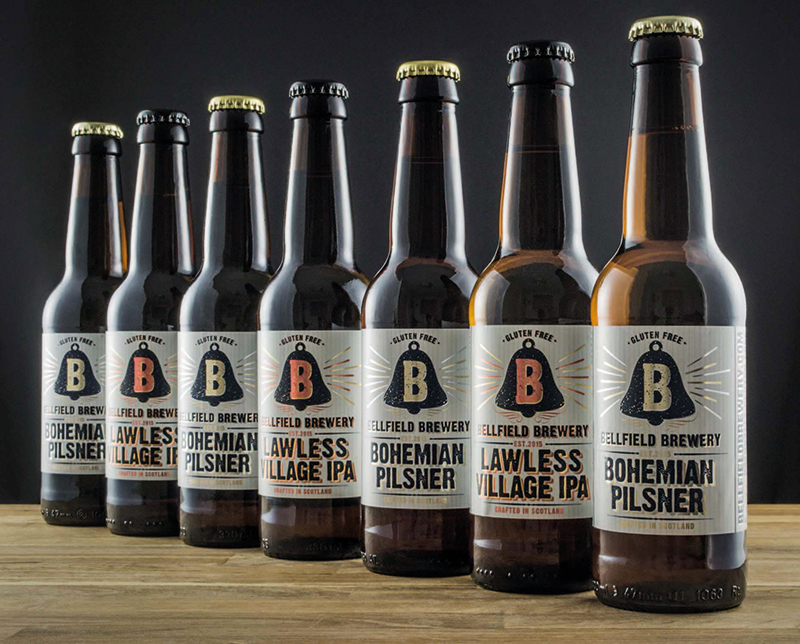 “As a start-up business the first year can be quite tough, but I would say it’s looking pretty rosy at this stage,” said Middleton.
The brewery also enjoyed success at the recent Scottish Beer Awards, with Bohemian Pilsner making it to the final in the Best Lager or Pilsner category.
It was vindication for the firm, which has aimed to create gluten-free beers that stand up as products in their own right.
“The beers stand up on their own, regardless of being gluten-free,” said Middleton.
“It opens [the beers] up to a wider market, and it would ultimately be great to be seen as a mainstream brand with added benefits.”
Gluten-free is said to be a growing market for the on-trade.
According to Coeliac UK, around one in every one hundred people in the UK and Europe suffer from Coeliac Disease – an autoimmune disease caused by a reaction to gluten.

People are more open-minded than ever.

But in addition to those who suffer from the disease itself there is a growing number of consumers who suffer from mild gluten intolerances or are opting for gluten-free products as a lifestyle choice.
And Middleton said the craft beer boom has encouraged pub-goers to be more experimental with their drinks choices overall.
“I think people are more open-minded than they were even two or three years ago,” he said.
“I think there’s been great changes.”