FOR years, The Caley Sample Room has enjoyed a good working relationship with the nearby Caledonian Brewery.
Situated just over 300 metres away, the brewery is said to have been the inspiration for the name of the gastropub; there’s even a perception among locals that a line runs from the brewery into the bar.

While this is a myth, there’s no doubting the connection between the two; and just like the brewery, The Caley Sample Room has deep roots in the area, with a loyal local following.
So when new owners Nick and Joy Madigan took ownership in April this year and planned a refurbishment, they were determined not to sever any of those ties.
The couple, who debuted in the trade with their Edinburgh bar Moriarty three years ago come December, told SLTN that the pub was “already a well-known place in Edinburgh”, and with that came a loyal crowd.

“We were aware there was a local following here and wanted to keep them on board.”

So when drawing up their refurbishment plans, Nick and Joy said it was something of a balancing act between pleasing locals and enhancing the venue to attract new custom.
Nick explained: “We were aware of, and wary that, there was a loyal local following in here anyway, so we wanted to do our best to keep them on board, but at the same time bring the bar up to a level that it’s going to attract new custom to make it a really good business opportunity for us.” 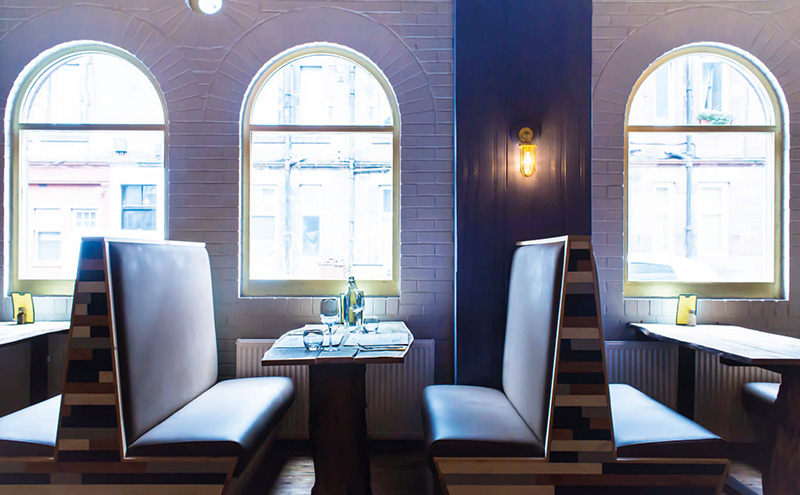 He added that he and Joy “never thought about changing the name at all” because of how well known it is locally.
And due to the pub’s proximity to Tynecastle and Murrayfield stadiums, the televisions and pull-down projector screen remained in order to continue catering for sports fans.
Nick said: “When Scotland and Hearts are at home, we do have a high volume of fans come in, so it’s not something we want to shut out.
“They’ve been coming here for years, they could coincide with our other regulars on a Saturday quite happily.”
But while there were aspects that the pair wished to build upon and push forward, Nick explained that he and Joy were also keen to “put our stamp on it”.
Inside, as well as general redecoration, the Madigans had their own vision of how to maximise the available square footage.
They installed booth seating by the windows, and brought in higher tables in the bar area; the venue now has capacity for up to 100 covers.

When we came in, we just wanted to freshen it up, put our own stamp on it.

“That’s to generate more space, particularly on the busier nights,” said Nick.
“We found that before, people were standing over tables and it was quite uncomfortable.”
Beyond the seating alterations, the couple had an exposed brick wall built, as well as a partition to mask the entrance to the toilets, and alterations made to the back-bar, which now includes quirky features such as hollowed out, lit up barrels which house drinks displays.
The toilets were given a complete overhaul, too.
As well as adding a disabled toilet, old beer kegs have been re-purposed as urinals in the gents – a feature which is said to have created a fair bit of comment from regulars.
But it’s not just inside that has undergone a revamp; the exterior has also received a facelift.
As well as restoring the clock above the entrance, part of the frontage was re-bricked, and sheets of cor-ten steel added on either side of the bricked entrance way; the sheets will age with time – a deliberate design effect that Nick and Joy wanted. And working with Edinburgh firm Signsation, new street sign-style fonts of ‘The Caley Sample Room’ were created for the outside.

When we came in, we just wanted to freshen it up, put our own stamp on it.

Nick said the majority of the design ideas came from Joy.
“With regards to the vision, it was something me and Joy discussed,” he said.
“And 90% of the credit for the way the bar looks is down to Joy because she’s the one that really researched everything and got ideas, spent hours on end day and night really putting everything together.”
Joy said that retaining the unit’s quirkiness was always a part of the vision.
“We wanted to keep it quirky; a quirky local, but still with the character that the Caley people know and love,” she explained.
“We wanted to modernise it, but softly.”
To achieve this, Nick and Joy worked with Edinburgh-based Craiglockhart Contracts on various aspects of the project, including the redesign of the back-bar, construction of the partition wall, the installation of the booth seating, the refurbishment of the toilets, and the alterations made to the external frontage.
Robbie Weddell, director of Craiglockhart Contracts, worked closely with Nick and Joy throughout the project, which had a four-week turnaround.
Nick said Robbie was “great, very professional”, and has “even been back to check in on things, and check there’s no snagging issues”.
For the Madigans, working with a contractor that was flexible was vital, as they opted to keep the pub open throughout the entire refurbishment. 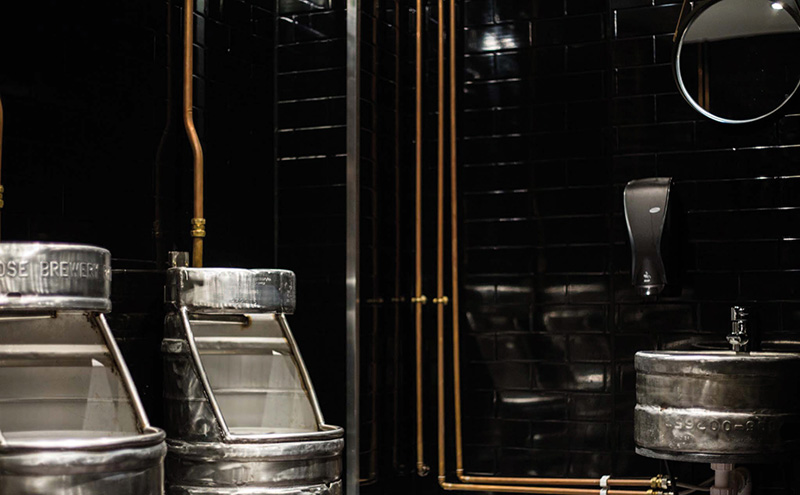 To coincide with the revamp, the food and drink offers were also overhauled.
Nick explained that he and Joy were determined to make their first venture into food a success.
“I’d like to describe it as between fine dining and bar food,” he said.
“Whereas we do have options such as burgers and chips that everybody likes, we’ve got seabass, calamari; with our specials we always ask the chefs to be really inventive and innovative and really put a stamp on the place.”
The menu also features seasonal dishes, and caters for vegetarians and vegans.
The Madigans work with a variety of suppliers on their food offer, including Shaws Fine Meats (meat), Campbells Meats (meat and fish), Crombies (sausages), and Murphy’s (fruit and vegetables).
On the drinks side, Joy said they “have done quite a lot of work within the bar”, including the installation of a new python by Heineken.
“The quality of the beer should be remarkably good, like a brand new bar,” she said.
Matthew Clark is the sole drinks supplier for the venue, but Nick added that they have a good relationship with Diageo, stocking “a lot of their spirits”.
The beer range includes Deuchars IPA from the nearby Caledonian Brewery, as well as brews from Barney’s, Inveralmond and Stewart Brewing, which are rotated on a weekly basis. Other taps are reserved for ‘guest’ breweries, including the likes of Cromarty, Alechemy, Sonnet 43, Harbour and Swannay Brewery.
The Madigans have also recently begun working with New Wave Distribution for the bottled and canned beer range; and Nick has observed an uptake in canned beers, saying “they’re becoming a lot more fashionable”.
With The Caley Sample Room revamp complete, the couple are already eyeing further expansion.
“We do have a strategy for the future, pinpointing other outlets,” said Nick, suggesting the aim is to stay within the capital for now.
“It’s just about waiting for the right time and finding the right venue.”