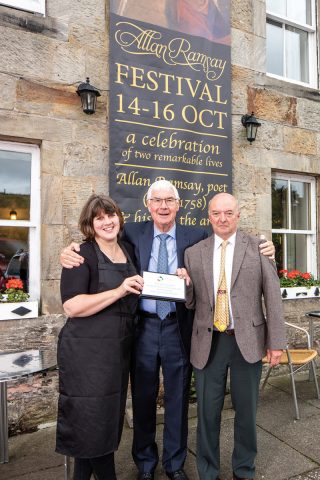 Poetry is set to take centre stage at a pub in the Borders village of Carlops next month as staff gear up to host the inaugural Allan Ramsay Festival.
The two-day event, which is being run in conjunction with not-for-profit organisation Pub is The Hub, will be held at the Allan Ramsay Hotel – a coaching inn which was built in recognition of the poet in 1792.
Academics at the centre for Robert Burns Studies at the University of Glasgow will support the festival alongside local musical and theatrical groups.
Events at the Allan Ramsay Festival will include talks, workshops, an exhibition, a guided walk and a special dinner.
Allan Ramsay Hotel licensee Rosemary Brown, who runs the coaching inn with fellow licensee Kenny Hall, said a survey of people in the local area had shown “loud and clear” that the community wanted the pub to celebrate its “famous connection” to the 18th century poet.