Sustainability is the key to success in Scrabster

IT’S not very often that the chef of an award-winning restaurant admits that, not so long ago, they couldn’t so much as boil an egg, but that was the case with Jim Cowie.
Somewhat later to the chef game than most, at 52, Jim decided on a total career change when he and wife Mary saw an opportunity to open a seafood restaurant in Scrabster.
Fast forward 15 years and the couple have built a reputation for quality, seasonal food, which has seen their eatery, The Captain’s Galley, named the Scottish Food Made Good Champion for sustainable dining for a second year running. 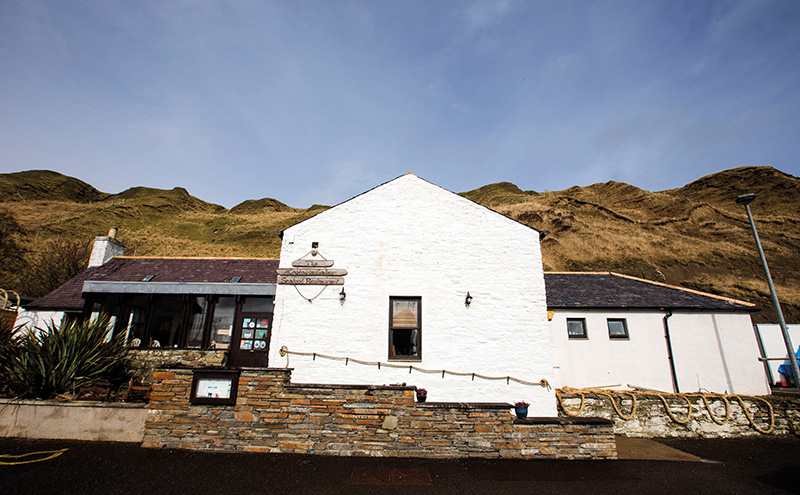 Speaking to SLTN, Jim said that while he has only been cooking the length of time the restaurant has been open, he is no stranger to Scottish produce, with a background that is very much entrenched in the fishing industry.

Jim’s father was a fisherman, and he himself has worked in all aspects of the sector, admitting “the industry has been my life”.
This experience helped the Cowies realise their vision when the derelict Scrabster icehouse and salmon bothy came onto the market.

Jim said that when it became available, “we thought, ‘this place has seafood restaurant written all over it’”.
As the Cowies began converting the disused bothy into the restaurant it is today, Jim enrolled at the local college to undertake a year-long course in professional cookery.
And while they were relatively new to the restaurant scene, their backgrounds in the fishing industry and nursing, respectively, gave them a firm foundation to build on.
“I’m 67 in two weeks time, I’ve had about 35 years of experience in business, and my wife has always been a partner in whatever business we have, so that’s something else we were bringing to the table,” said Jim.
“So we had the fish knowledge, the caring, front-of-house on board and we had the business acumen on board.”
But above all else, the couple brought a passion for sustainable, seasonal food to the table.
Influenced by their backgrounds, the Cowies do all they can to minimise waste; Jim, who sources, fillets, and cooks all his own fish, has a ‘nose to tail’ approach to his cooking.
“If I’m buying a fish, to me, it’s vulgar to take the loin from the fish and throw it away,” he said.
“I feel that’s where the mindset comes in; we have to use all of the fish.
“I mean, I’ve just come back to the cod from yesterday, and I’ve got the belly flaps for the one [dish], the cheeks for another; this is before we start on the fillet. And the bones will be going in the stock.”
“Eating the seasons” is a key part of the restaurant’s sustainable philosophy, with Jim only buying fish from local
fishermen.
He said that the strong relationships he enjoys with these suppliers has played a key role in the success of the restaurant.
“I don’t even tell the fishermen what I want, the ones I deal directly with,” he said.
“Sometimes I’ll have a look at the market and see what’s fresh and what’s best on the day. But when boats are keeping things fresh for me, I never tell them what I want, because that’s me doing their job for them and who am I? That’s the trust we all have in each other.”
With a clear commitment to sustainability, as well as seasonality, being named the Scottish Food Made Good Champion for 2016 has been the feather in the Cowies’ cap.
Jim described the accolade as “the biggest compliment anyone could pay us”.
“In all sincerity, that was our Michelin Star,” he said.
“And I take nothing away from Michelin, but that’s what I would class it as.”
However, the pair aren’t content to stop where they are.
The Cowies will expand their business this month with the opening of the newly-built Scrabster Seafood Bar.
Jim described the new part of the business as a more casual dining experience that will continue to carry the sustainable ethos of The Captain’s Galley.
“It’s fish and chips, it’s got all glass double glazed units; the ethos we’ve got for that is you sit there, have the freshest fish in the world and you’re eating it as you watch the boat that landed it that day,” said Jim.
“That’s what we’re going for there.”
Jim explained that the expansion is a sign of their hard work, insisting it demonstrates that “it’s never too late to retrain”.