Situated on the edge of Spain’s south-western coast, almost entirely surrounded by sea, sits Cadiz – an ancient city and port. 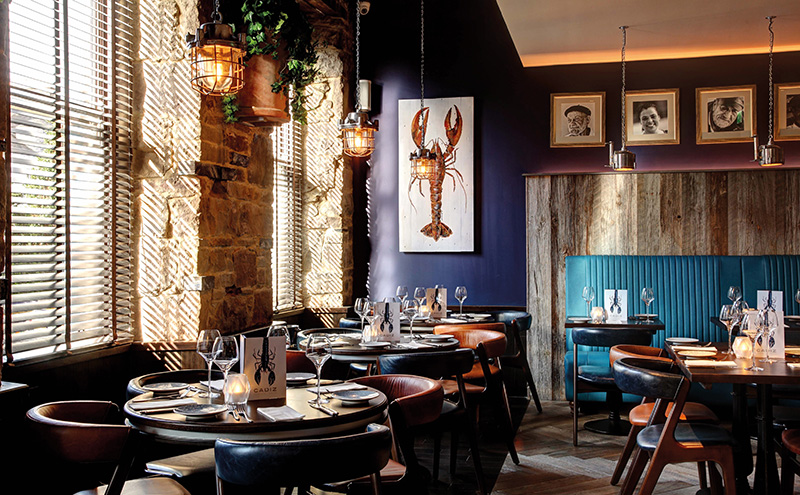 It’s one of eight provinces that make up the autonomous community of Andalusia, and has proved to be the inspiration behind the latest venture from the Di Maggio’s Restaurant Group.
Named after the port city, Cadiz is a new first-floor venue located above sister restaurant, Café Andaluz, on George Street in Edinburgh.
And it’s clear on entering Cadiz that the inspiration for the restaurant goes far beyond the name.
From the rustic, exposed stone walls in the main dining area and the low-hanging boat-style lights that were sourced from Poland, to the murals of different sea creatures, ranging from lobsters to haddock, the design inspiration is evident throughout.
Similarly, a colour palette of blues and cream has been used to tie in with the theme.
Formerly a disused, vacant space, the unit required a complete fit-out to create Cadiz, with Di Maggio’s in-house designer Ian Beattie working with project managers BCC QS and building and shopfitting contractors Hugh Stirling Ltd on the sizeable project; crucial to the conversion of the space was the construction of an entirely new kitchen, which was supplied by Jack Hogan Catering Equipment. 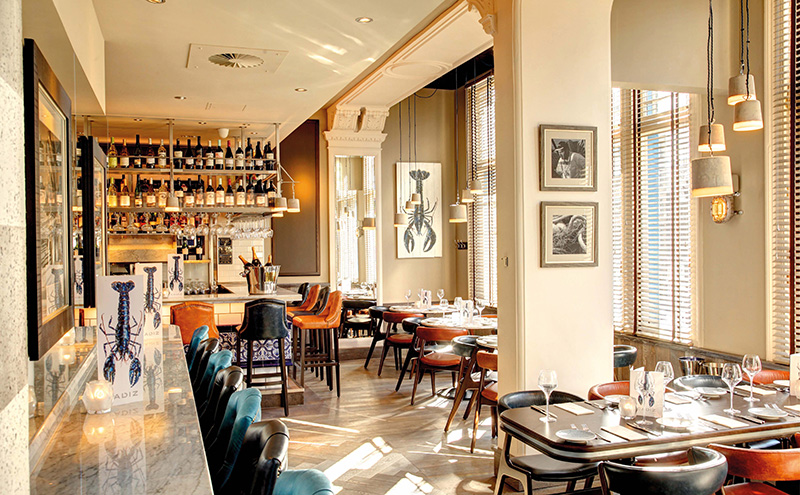 Cadiz is not the group’s first venue with links to the ocean.
The Anchor Line in Glasgow occupies a grade A-listed building which was once the booking office for Anchor Line ships which sailed between Glasgow and New York; and the interior of the bar and restaurant is designed to pay homage to the building’s shipping heritage, with old photographs, tickets, posters and other memorabilia relating to Anchor Line ships used throughout.
Cadiz, however, is a very different concept and design.
“If you look to the Anchor Line, it’s a different idea; this is more about the ports, whereas [Anchor Line] is more about the liners and things,” said general manager John McGhie.
“This is more about the seafood itself.”

For a small place it’s quite versatile. There’s a lot you can do with it.

McGhie explained that seafood is central to the restaurant’s food offer – the group is working with Bernard Corrigan, a wholesale supplier of fish, which provides Cadiz with a variety of seasonal seafood that’s set to be offered throughout the year.
And the seafood focus is further emphasised through the use of a lobster, which has become the signature image for Cadiz – it has pride of place on the front of the menu, as well as featuring on various large murals in the restaurant.
When it came to the layout, utilising every inch of the 75-cover unit was vital, according to McGhie.
Each ‘area’ was deliberately given its own identity, which McGhie said has added to its versatility.
“For a small place, it is quite versatile,” he said. 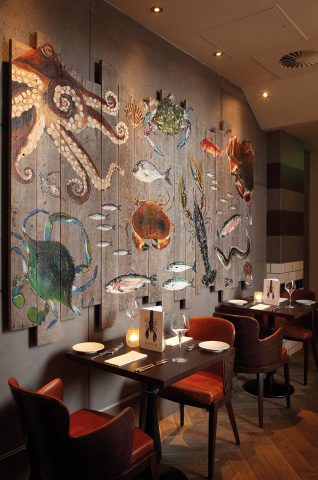 “There’s a lot you can do with it.
“You’ve got the bar area, and then you’ve got the restaurant area so that it’s separated if the bar is busier, it’s kind of separating it away from the restaurant side of things.
“It’s good as well because it means if someone is looking for a more intimate atmosphere, then I can give them a table in the corner, whereas if they’re looking for a relaxed, quick bite I can give them something close to the bar so that it’s a bit more open.”
And he reckons this designation of areas, as well as the difference in styles – from the cosy rustic dining areas to the slick, clean-cut bar area – works in the venue’s favour, meaning it can cater to a varied range of customers at any one time.
“That’s the thing with this place; it’s all different wee pockets, there’s different bits going on in different places,” said McGhie.
Sitting in the main dining area (pictured left), the general manager admitted it is his favourite in terms of the design, saying “it speaks of a speakeasy kind of idea, and that really appeals”.
“But then other people quite like going round the corner where it’s quite open, quite clean-cut,” he said.
“So there’s a wee bit for everyone.”
Having opened in July, Cadiz is trading well, according to McGhie, who said the ‘poster boy’ for Cadiz – the lobster – and the bar area in particular have caught customers’ attention.
“To be honest, the lobsters; everyone is taking pictures of the lobsters,” he said.
“In terms of the building itself, it’s probably the bar [that impresses most].
“As soon as you walk into that corner and you see the structure of the bar, especially when the sun is on it – it looks pretty spectacular.”
With reactions to Cadiz positive, and footfall at a healthy level, McGhie said the focus now is on growing the business and its reputation as a “good name and place to go”.
“At the moment that is the aim, then in the future, carry on with growing, but just what we’re doing well, just keep doing it, and carrying on with the [high] standards,” he said.