Quirky concept going down a storm in Ayrshire, operator says

From the mural of a pink flamingo riding a penny-farthing which adorns the building’s frontage and the bowler hat light shades in the windows to the Barbie doll swinging on a crystal decanter light pendant (Miley Cyrus Wrecking Ball-style) and wi-fi password ‘yerdasellsavon’ displayed on a cinema-style light box, the recently-opened 7 Saints certainly brings something different to the Ayrshire town of Prestwick. 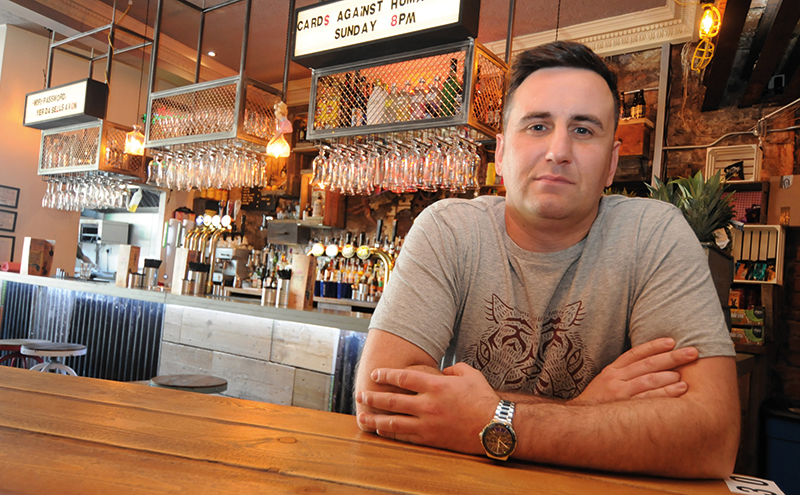 And although Nick Livingstone, who launched the venue in June, concedes the design is a “slightly dialled down” version of his original concept, it’s clear ‘quirky’ is still very much the watchword at the Star Pubs & Bars leasehold outlet, which previously traded as traditional pub the Eagle.
“As an independent single operator with not much money behind me I needed to give the bar a real point of difference and make a big impact,” Livingstone told SLTN.
“The venue needed a bold approach to make an impact on the high street and stand out from the big boys. It needed to be quirky, and it also had to be laid-back and unpretentious and appeal to everyone.
“When I sat down with Star I knew what I wanted to do and I knew how I wanted to deliver it. I had a full deck of cards before I signed the lease – the whole concept.”
Livingstone, who is from the Ayrshire town of Cumnock, had not only done his homework, he had spent more than a decade working for a number of managed pub groups, gaining experience in all aspects of running a business. He took his first part-time job in the trade at the age of 18 while training as an engineer and, after a spell working in bars in Spain, returned to Scotland and roles with G1 Group, Belhaven, Revolution Bars Group, Eclectic Bar Group at its Edinburgh venue Lola Lo, and Signature Pub Group.
Ready to take the next step and open his own venue, Livingstone looked at sites in the capital but said “the numbers were crazy”.
However, a conversation with a rep from Heineken (Star Pubs & Bars’ parent company) pointed Livingstone in the direction of the pubco’s website.
“I thought it was a way of having my own place because the ingoing costs were very accessible and it meant I could do it myself without a business partner,” he said.
“Then this place came up and everything just lined up.
“It’s a town I know well and it meant I could move home to Ayrshire and just plough everything in to getting the venue up and running.”
Livingstone got the keys on November 16 and continued trading the Eagle while plans for his own concept were finalised. Then, in April of this year, the £150,000 refurbishment with Star Pubs & Bars got underway, with Livingstone working on the eight-week project with Rough Design and Dimension Shopfitting.

The unit was stripped out – the walls were taken back to the brickwork, the large horseshoe bar was removed and a new bar counter relocated to the side to create more floor space for customers, one of the two front entrances to the venue was closed off to make space for an open kitchen, and the windows were lowered by around four feet to create large picture windows.
In terms of the design, there’s no shortage of quirky features (beyond the bowler hats and Barbie doll).
The bar frontage is clad in corrugated iron and wooden pallets and features a reclaimed railway sleeper foot-rest; mesh cages holding glasses and bottles of wine are suspended above the bar; and, hanging above the stepped gantry, is a large ‘rusted’ clock face featuring a neon number ‘7’ and containing cogs found by Livingstone on the family farm – the clock face is actually wood made to look like rusted metal and is one of several pieces in the outlet by artist Will McEvoy (he is also behind the wall murals throughout the venue).
Furniture in 7 Saints is an eclectic mix of booth seating separated by mesh panels featuring ‘love lock’ padlocks like the Pont des Arts bridge in Paris, high tables made from reclaimed scaffolding planks and poles, a working arcade game table, mismatched chairs and stools, and purple leather sofas.
The quirkiness even extends to the toilets, with the ladies’ featuring bold, tropical decor while, in the gents’, the urinals and sinks are made from beer kegs; and the beer garden, which Livingstone built himself and includes furniture made from wooden pallets, an outdoor tiki bar and a ping pong table.
The drinks have an equally quirky flavour.
Alongside a draught range which includes Heineken Extra Cold, Foster’s, Amstel, Birra Moretti and Red Stripe, and a premium spirits range with gins such as Aviation and Death’s Door, the cocktail list features drinks like Wrecking Ball (Absolut Raspberri, Midori, lemon juice and cranberry  juice) and White Trash (Evan Williams Fire bourbon layered with a mix of milk, cream and Frangelico and served with a bubblegum tattoo).
Even the name of the 160-capacity outlet, which trades until 2.30am at weekends, has prompted its fair share of questions (7 Saints is so-called because there are said to be seven streets in Prestwick named after saints).
Despite the local connection, Livingstone thinks 7 Saints is a name and a concept that can travel.
“I think how we branded the name is more important than the name,” he said.
“We use the number 7 a lot and we’ll do that if we take it elsewhere because 7 Saints won’t have a tangible link there. Glasgow is a possibility – people have said it looks like something that you’d find in Finnieston; I think it could also work in some towns.”
While Livingstone admits he has looked at other sites, he said he won’t do anything until next year. Until then, the focus is firmly on the Prestwick unit.
“I’m really happy with how it turned out and it’s going really well,” he said.
“After the first five weeks we were 35% above target and growing.
“Prestwick is a really vibrant place and I still can’t believe this site was available and I got the opportunity. Then to be given the support and free rein to deliver my vision was phenomenal.
“I’m absolutely over the moon and I want to push on and see how far I can take this.”