When it comes to the perfect accompaniment for a cold beer, it’s hard to look past the traditional bag of nuts or packet of crisps.

But as the craft boom has encouraged customers to experiment with fuller flavours in their glass, it’s become worthwhile for licensees to branch out when it comes to the snacks they’re stocking on the back-bar.
That’s the view of drinks supplier Bibendum, which has drafted a list of “indispensable beer and snack pairing ideas” to help its on-trade customers choose the right snacks for their range of beers.
American-style IPAs are hugely popular in the on-trade at present, and Bibendum has advised licensees to consider a similarly American style of snack.

A handful of briny olives is perfect with a milder pilsner-style lager.

The company’s own suggestion is to pair Edinburgh-brewed Barney’s Volcano IPA with jalapeno-flavoured pretzels.
The pairing, said Bibendum, perfectly matches the “refreshing flavours” of the beer with the spiciness present in the pretzels.
For pub customers not keen on the IPA style, licensees have the option of an easy match for a milder, pilsner-style lager.
According to Bibendum, olives are the perfect accompaniment to this popular style of beer.
“A classic pilsner needs something salty,” reads the advice.
“And a handful of briny olives are just the ticket.”
The example beer provided by Bibendum was Bohemian Pilsner from English craft brewery Howling Hops.
A more adventurous pairing, meanwhile, involves the saison style of beer.

The flavourful style, which traces its roots back to the farmhouses of French-speaking Belgium, is perfectly matched by the salty flavour and crumbly texture of a well-matured cheddar, said Bibendum.
The example beer provided by the firm was Saison Sauvin, by New Zealand brewery 8 Wired, which it described as having “funky, earthy” flavours.
Pork scratchings might not strike some as particularly sophisticated, but the tried and tested pub snack is a surprisingly good match for a traditional Belgian wheat beer, according to Bibendum’s research.
The company, which used Blanche de Namur beer from Belgian brewery Brasserie du Boq, reported that the “smooth and slightly acidic” flavours of the beer make it perfectly suited to “cut through” the rich flavours of the pork scratchings.
Lastly, the company paired New Zealand-brewed porter Pot Kettle Black with sweet and salty popcorn.
The matching, said Bibendum, juxtaposes the “dark, malty flavours” and “crisp, fresh finish” of the beer with the flavours of the popcorn.
Pot Kettle Black is produced by Wellington-based craft brewery Yeastie Boys. 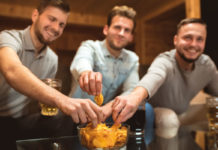