Sports haunt has a major facelift

When Glasgow institution Coopers opened its doors for the first time in the city’s west end in 1868 it was as a shop – and it’s this history that has been celebrated in the bar’s new look.
Nods to Coopers’ heritage can now be found throughout the venue, with shop-themed art pieces and other paraphernalia adorning the walls. 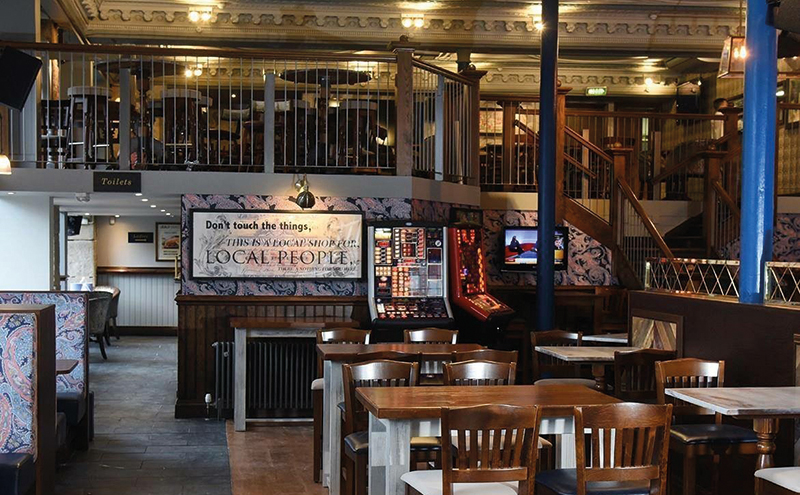 Famous shops from pop-culture down the years are also celebrated in Coopers’ new interior, with artwork from Open all Hours and the League of Gentleman hanging on the walls as well as the old fat furry feline Bagpuss who is perched above the back-bar.
However as shop décor goes, the showstopper has to be a poster of Still Game shopkeeper Navid Harrid which echoes Barack Obama both in style and its “Navid for President” message – and which Navid actor Sanjeev Kohli has already used to challenge US presidential candidate Donald Trump on Twitter.
New life has also been breathed into the building’s original features, which manager Martin Downey, who runs the venue for pub company and brewer Belhaven, said customers frequently commented on even before the refurb.
Coopers’ Victorian-era ceiling with its ornate, listed cornicing is possibly the most striking feature and, following the refurbishment, now really pops thanks to a fresh lick of paint, which brings the details of its design into greater focus.
And it’s not the only part of the venue’s interior that’s been sharpened up.
Coopers’ mezzanine area has been brightened through the use of Cornetto art pieces and the removal of a false wall that previously covered the windows.
Capacity has also been boosted on the upper level, with a snug area to the rear which Downey said had previously been “dead space” and is now home to a fitted semi-circular booth seat. 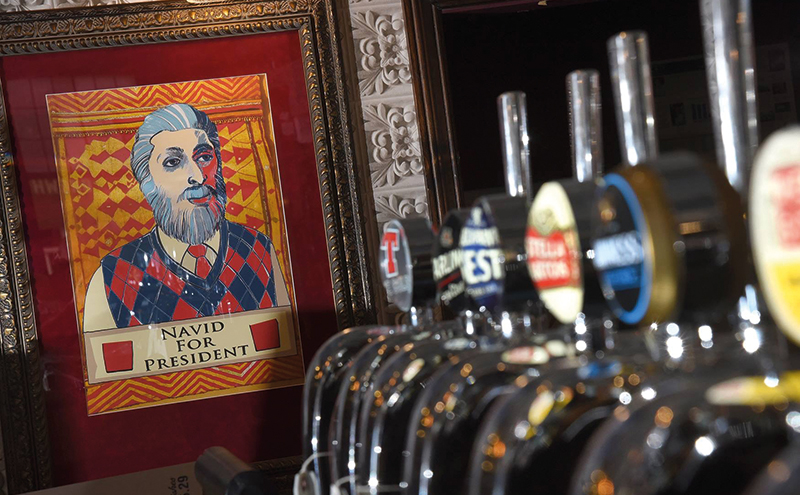 The overhaul of Coopers’ interior represents a six-figure investment which saw the venue close its doors on July 10 with main contractors Hugh Stirling turning things around in time for reopening on Saturday July 23.
“The unit itself hadn’t had any major work done for seven or eight years,” said Downey.
“Wee bits and bobs had been done over the years but that’s it.”
The refurb was certainly thorough.
There’s not a table or chair left from the pre-revamp Coopers; instead the interior has been modernised with new dark hardwood tables, copper-topped poseur tables, leather stools and bespoke booth seating complete with eye-catching blue and pink Paisley-esque fabric to match the new wallpaper.
And while shops down the ages may now be the overarching theme of the Coopers interior, there’s also a nod to the venue’s credentials as a live sports pub with a display of vintage sports equipment mounted on the wall by the bar, opposite the front door.
Coopers’ sports offer has been enhanced, too, as part of the refurbishment with the installation of a three-metre pull down screen to add to the 15 televisions, now all HD, spread throughout the venue.
Downey said that while Coopers is “well-established in the west end for being a great venue for sport” the addition of the pull down screen improves the offer further.
Live sport has provided some special moments at Coopers, according to Downey, who highlighted one incident with Icelandic students during Euro 2016 as the perfect example of how the local area’s diverse community can create special moments.
“One five o’clock on a Wednesday [during Iceland’s game against Austria] we had Icelandic students in here going ballistic,” said Downey.
Those with less interest in football needn’t be put of by the screens, however, as, even though the venue has been known to fill up with 350 fans on match days, the revamped Coopers is enjoyed by a broad customer base.
“[The clientele is] a mix of west end people, students, couples, people on events like sub crawls and stag dos and our sports people,” said Downey.