WHEN SLTN catches up with Brian Maule, he’s not long back from a family summer holiday.
It was a much-needed break for the chef.

And while he admits he phoned in to his Brian Maule at Chardon d’Or restaurant on Glasgow’s West Regent Street daily, he said he did manage to recharge his batteries.
Since picking up the SLTN Fine Dining Restaurant of the Year Award, in association with Strathmore, last November (his restaurant also won the accolade in 2013), there’s been no let-up for the chef, who is at work by 8am most mornings and doesn’t usually leave until the last dish has left the pass; when asked how many hours he clocks up in a week, “I try not to count” is his reply.
But the long hours, hard work and dedication have paid dividends for the chef.
Brian, who, at the age of just 24 was appointed head chef at Michel Roux’s Le Gavroche in London, celebrated the 15th birthday of his Glasgow restaurant, Chardon d’Or (which means golden thistle), on June 1 – an anniversary he described as a major milestone.
“It’s hard to believe it’s been 15 years,” he said.
“It’s a big achievement; I’m really pleased.” 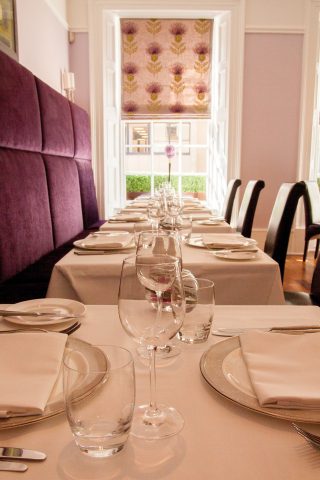 That the restaurant has endured at the top of its game for a decade and a half is down in no small part to Brian’s attention to detail and drive to continue raising standards.
As a result, the eatery has evolved down the years.
A lower ground floor private dining area was added nine and a half years ago, giving the restaurant a flexible space which can accommodate up to 60 guests across a number of configurations.
And, last April, the 85-cover restaurant was refurbished, pairing the crisp white linen and elegant silver and glassware on the tables with a fresh interior design which incorporates accents of purple.
It’s not just the restaurant’s interior that has changed.
The food at Chardon d’Or continually evolves.
Seasonal, local produce has underpinned the menus since day one, and Brian and his seven-strong brigade continue to develop new and innovative dishes using the highest quality ingredients.
“We’re always looking to do things differently, present things differently,” he said.
“People now are willing to try more, they’re more adventurous and you’ve got to keep raising standards.
“I get inspiration from all sorts of places.
“I try to go to London often and I speak to Michel [Roux] regularly, he’s a good friend. And they [the Roux family] are doing a lot in Scotland just now which is great.
“I think Glasgow’s restaurant scene has come on leaps and bounds in the last 15 years. There are a lot more places now.”
Further evidence of change at Chardon d’Or can be found on the back-bar, where the number of gins has rocketed from five a year ago to 65, with Brian predicting it will top 80 by the end of the year. The restaurant also hosts a monthly ‘gin experience’ lunch event, where guests taste five different gins with a lunch designed to complement the spirits.
“We started doing the gin lunch in November and each one has sold out straight away,” said Brian.
“We’ve got a cocktail lunch coming up, the wine dinners are doing well and we have a monthly lunch club and that’s worked really well for us.
“It’s something else we do that’s a bit different.”
Of course, as Brian has developed his restaurant business over the past 15 years, the chef has, like others in the trade, had to deal with changes outwith his control.
Like many licensed trade businesses, the effects of the recession and the lower drink drive limit were felt at Chardon d’Or.
“We’re a small business and, like many small businesses, getting through the recession – we had a tough few years; but we got through it,” said Brian.
“The lower drink drive limit is another thing that’s hit everyone, us included. We can sometimes do 30 covers at lunch time and only sell two or three glasses of wine. It’s a big change.”
Amidst the change and challenges of the last 15 years, one constant is Brian’s passion for the industry – and for inspiring young people.
For the last 14 years, he has been involved in Glasgow City Council’s Culinary Excellence programme, he gives cooking demonstrations at primary schools, and young people
are well-represented in his brigade.
And while Brian said recruitment is becoming more challenging, he reckons it’s not endemic to the hospitality sector.
“I think it’s just that kids are looking for different things nowadays,” he said.
“But I like to give young people a chance and it’s rewarding to see them progress and give them an opportunity.
“For me, when I was offered [the head chef role at Le Gavroche] I wanted to prove to myself that I could do it and I didn’t want to let anyone down.
“It becomes very personal as a job. I try to encourage that sense of discipline in the young people that work here.”
It seems, then, that Brian has no intention of taking his foot off the gas any time soon.
In fact, he revealed he could open a second outlet – although he said it would be “more pubby, casual dining and probably not in the city centre”.
“It’s all about finding the right place,” he said.
For now, the focus is on Chardon d’Or.
“We do what we do here and it’s going well,” added Brian.
“We refurbished the restaurant last April – I think it looks great – and we’ve got a good team in place.
“And winning the SLTN Award again was great.
“At the end of the day, I really enjoy what I do. Like anything, it has its moments but there are lots of positives.”