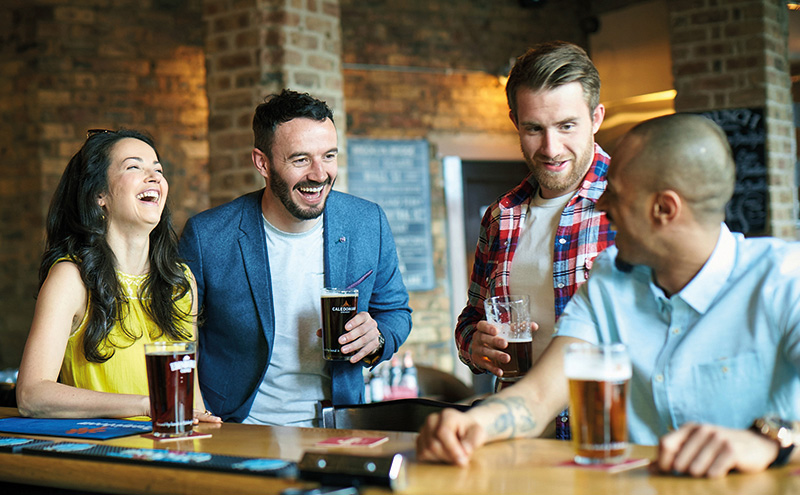 TRACEABILITY is said to be a bigger factor in beer sales than ever before, but it’s not just the craft end of the market that makes the most of its Scottish credentials.
Some of Scotland’s best known beer brands have stressed the importance  of embracing and promoting Scottish heritage, regardless of whether an outlet’s beer range is comprised of smaller, independent producers or larger, more established names.
Scottish consumers have long been a “fiercely patriotic bunch”, according to Tennent’s sales director for the on-trade, Alan Hay. He said that as a nation with a “strong history in innovation”, we have “every right to be proud of our country, its brands and its produce”. And so Hay believes that, as provenance becomes an increasingly important consideration of consumers when deciding which beer brand to buy, supporting and buying local can be a way of capitalising on the growing trend.
“Tennent’s Lager has always been a local favourite, brewed in Glasgow since 1885 using 100% Scottish barley and fresh water from Loch Katrine,” said Hay.
And as the appetite for Scottish produce “is generally high at the moment”, Hay said operators should consider stocking a mix of Scottish beer brands to take advantage of the sales opportunity it presents.
He added: “One of the key elements of running a successful licensed premises is getting the brand mix right and it’s encouraging to see that there are now a diverse mix of Scottish drinks brands that fit the bill for any type of outlet.”
Tara Karimian, marketing manager for McEwan’s Beers, also stressed the importance of variety, saying there should “never be a one size fits all approach”, and that licensees should ensure there’s always a range of Scottish beers available.
But Karimian stressed that variety should not be exclusive to craft beers, as there is still a big demand for local beers from longer-established breweries.
“Craft beers make up just 5% of the total beer market across the UK,” she said.
“This shows that while the craft beer ‘revolution’ has had a positive impact in creating more variety, many drinkers still want to drink a beer from a brewery that has a proven track record of delivering consistent quality with every pint.”
And when it comes to capitalising on Scottish provenance, better known brands can “sit well” with the growth in niche spirits or locally-produced beers, according to Hay at Tennent’s.
Yet local support is also key in the eyes of more ‘niche’ craft brands, according to Crawford Sinclair, director of UK sales for Innis & Gunn.
He said: “If you have a local owned brewery, stocking their beers can be a great way of supporting the local economy, something that is becoming increasingly important to consumers.”
Another factor licensees must consider, regardless of the brands they stock, is that the staff on hand know what they are doing; knowledgeable staff can educate consumers about the heritage of what they are drinking, and so have power to influence up-selling.
And while it forms part of the basics, Andy Maddock, managing director of Caledonian Brewery, stressed the importance of staff’s ability to pull a good pint.
He said: “Make sure your team knows not only how to pull the perfect pint, but is also familiar with line cleaning and good cellar management practice so they understand the importance of each stage – from keg to glass.”
Operators who want to make the most of Scottish provenance must also ensure that they market their outlets correctly, said firms.
Michelle Chadwick, brand manager at Halewood Wines & Spirits, parent company of Scottish brand Crabbie’s, said an engaging social media presence and interaction with consumers are key.
And she reckons these are important factors in promoting not just Scottish beer, but all varieties of drinks.
Relevant point of sale materials were another tool highlighted by Chadwick, who said these resources can help inform customers and encourage sales.