THE team at Falkirk’s Tryst Brewery is celebrating after its Raj IPA was named the Champion Beer of Scotland for 2016 by the Campaign for Real Ale (CAMRA). 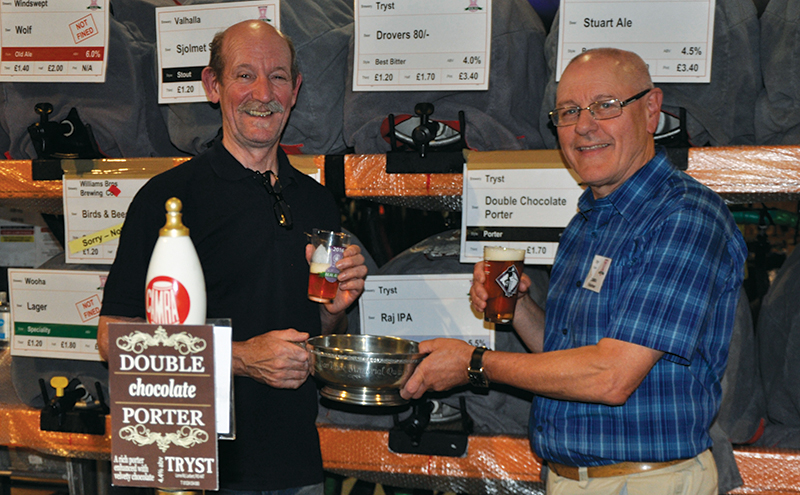 The 5.5% ABV India Pale Ale triumphed after coming top in a blind tasting by a panel of judges at the Scottish Real Ale Festival in Edinburgh’s Corn Exchange earlier this month.
Tryst’s Raj IPA took home the gold award beating Ayr Brewing Company, which was awarded silver for its Rabbies Porter, and Cairngorm Brewery’s Black Gold, which took bronze on the day.
John McGarva, owner and head brewer at Tryst Brewery, said he and his team have been producing Raj IPA since 2005.
“It is brewed exclusively with traditional British hops and Scottish pale malt which give the beer a perfect balance between the hop and malt flavours and a fresh, hop aroma,” he said.
“It has already won awards from CAMRA for being the best strong bitter in Scotland but to win overall Champion Beer of Scotland is a crowning achievement.”
John’s son Ross, assistant brewer at Tryst and a chemical engineering student at the University of Strathclyde, told SLTN the team is delighted with the award.
“It’s one of these things that you get nominated for, but you don’t necessarily expect to win,” he said.
“There were a lot of beers in there that are excellent beers, a lot of competition as well. Winning an award like this makes you sure we still have a place in the market.”
And he said the Scottish beer scene is continuing to go from strength to strength.
“Even in Falkirk over the last six to 12 months, there’s been restaurants asking for bottles; they want beers so they can give customers the option rather than just your standard lagers and draughts that used to be available,” added Ross.
“So people are really trying their best to get involved and it’s certainly good for us, we can’t complain.”
Ray Turpie, CAMRA’s director for Scotland and Northern Ireland, said: “Congratulations to everyone at the Tryst Brewery on being worthy winners of this most prestigious of CAMRA’s awards in Scotland.”