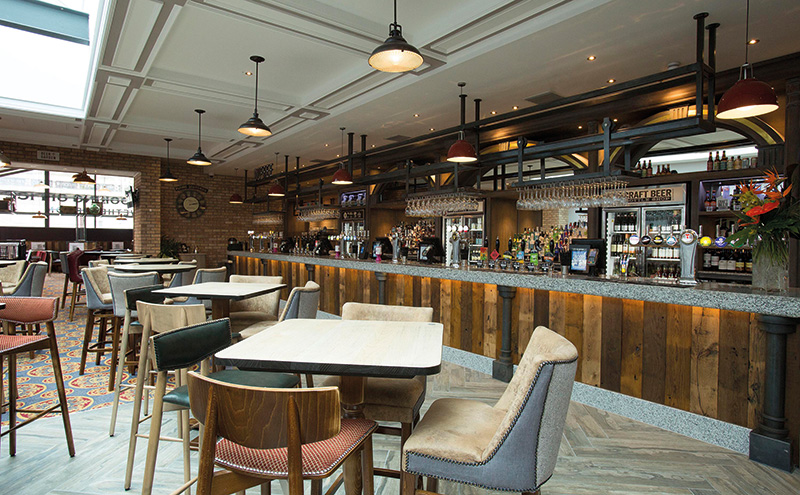 JD Wetherspoon has opened a new pub at Waverley Station in Edinburgh after a claimed £1.9 million investment.
The Booking Office, on Waverley Bridge, was originally the train station’s ticket office, later became the parcel office and was most recently Chinese restaurant Jimmy Chung’s.
The pub, which has a single bar and two beer gardens, is open 6am till midnight Sunday to Thursday and 6am till 1am Friday and Saturday, with food served every day from opening until 11pm. Children accompanied by an adult are allowed on the premises until 8pm.
Wetherspoon said the venue will specialise in cask, craft and world beers.
Historic photos, details of local history and art by local artists feature in the interior, as well as various ornaments commemorating the building’s own history. A mosaic detail on the entrance floor is based on the original railway company logo and a large roof light, similar to one seen in historic photos of the building, has been reinstated.
The pub was opened by duty manager Mark Brennan and Sami Ben Hafi of Wetherspoon along with members of the Hearts ladies team.
Manager Scott Horne said: “Myself and my team are looking forward to welcoming customers into the pub and we are confident that it will be a great addition to the Edinburgh community.”
Wetherspoon owns a number of pubs in Edinburgh, including The Standing Order and The Alexander Graham Bell, both on George Street, The Playfair at the Omni Centre on Leith Walk, The Foot of the Walk on Leith’s Constitution Street, as well as The White Lady on St John’s Road, Corstorphine.