It’s a sunny Thursday afternoon at The Raeburn in Edinburgh’s Stockbridge and the beer garden is filling up.
At one table, a young couple is drinking pints of Staropramen, while Franciscan Well Chieftain IPA is the drink of choice at another; inside, a bartender is pouring a pint of Coors Light for a customer at the bar. 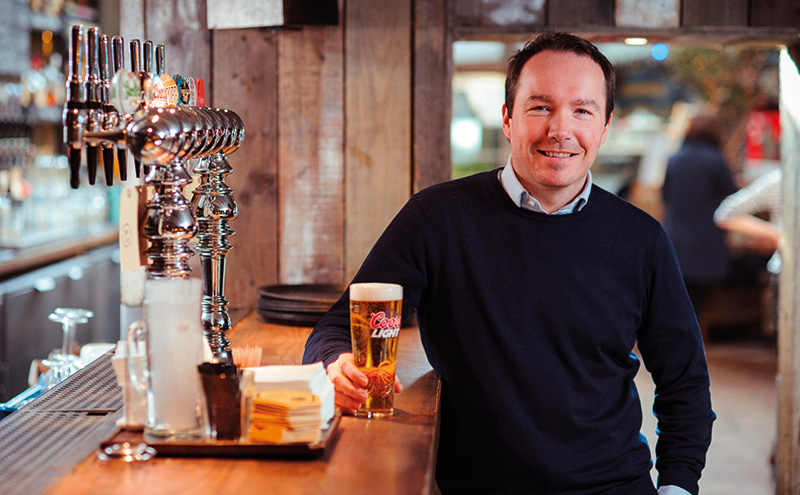 It’s a sight that understandably brings a smile to the face of Hugo Mills, sales and operations director for Scotland at Molson Coors.
“I love to see that – people enjoying our brands,” he told SLTN. “It’s men and women, and all age groups; it shows that beer is for everyone. And I think we have a diverse portfolio that really does offer something for everyone.”
There’s no denying the Molson Coors portfolio has diversified.
The beer giant’s earlier acquisitions – of Sharp’s Brewery in Cornwall in 2011 and Cork microbrewery Franciscan Well two years later – added products like Doom Bar ale and Chieftain IPA to Coors’ stalwarts Carling and Coors Light.
And, since Mills took the helm at Molson Coors in Scotland two and a half years ago, there have been further additions to the portfolio.
The firm’s acquisition of Rekorderlig UK from Manchester-based Chilli Marketing last July added a suite of Swedish fruit ciders to Molson Coors’ offer; last year also saw the company take over UK distribution for Czech lager Staropramen, which it acquired in 2012; earlier this month it revealed plans to launch Pravha – a 4% ABV premium Czech draught beer from the brewers of Staropramen; and it has just taken on UK distribution for Dutch brewer Bavaria’s portfolio of beers, which includes alcohol-free Bavaria 0.0%.
These latest additions, which also join the likes of US wheat beer Blue Moon, Grolsch and Cobra in the Coors stable, give the firm, whose brands are available to the Scottish trade through its two “principle supply routes” of Matthew Clark and Belhaven in addition to other wholesalers, a portfolio which Mills reckons ticks all the boxes.
“Consumers have become much more brand conscious and adventurous in the last five years,” he said.
“I think before that people were maybe a bit blasé about what they drank. Now, in the wake of the recession, people are much more [selective] about how they spend their money; they want to enjoy quality products.
“Molson Coors’ portfolio is very much geared towards that.
“A couple of years ago I think a lot of people in the Scottish trade just associated Molson Coors with Carling. We’ve still got work to do but I think more and more people now associate us with one of the more interesting and diverse portfolios of beers and ciders.”
And Mills is quick to stress that Molson Coors’ commitment to the Scottish trade extends beyond the brands.
Its 28-strong team north of the border includes beer sommelier Julia Bone, who Mills said can offer Coors’ customers the “full spectrum of training – from entry level to sophisticated advanced training”, as well as help with events like beer tasting nights. The brewer also has a team of eight in-house customer technical services (CTS) experts who work with its Scottish customers.
“These guys are technical experts who are out there every day working with the trade,” said Mills.
“The CTS guys will do a consultation on everything from making the bar more efficient to addressing any technical issues to how to take care of the glassware. They ensure a customer is 100% ready to roll with the product and that the quality and consistency is there.”
Maintaining quality is crucial, said Mills, especially at a time when the on-trade is facing no shortage of challenges.
The lower drink drive limit, which came into force in December 2014, continues to impact on trade. It has, according to Mills, “changed drinking habits forever” and left a “long-term scar” on the on-trade.
And while he reckons attempts to legislate and regulate will continue, Mills said more general shifts in consumer behaviour could pose just as much of a threat to trade.
“I think a major focus for suppliers is to tell operators about the changing habits of consumers – that is happening faster than anything else,” he said.
“Consumer behaviour continues to change at pace; keeping up with it – in fact, staying ahead of it – is the big challenge.
“We’re spending a lot of money on research into consumer behaviour in Scotland so we’re pretty well-equipped.
“We’ve got a really distinctive offering – retail know-how, a beer sommelier, technical support, and a diverse and relevant portfolio that offers what consumers want to drink now, not what they used to want.
“We’re not here to mess around; we’re deeply committed to the Scottish trade.
“It’s fair to say we’re enjoying unprecedented growth in Scotland, which is considerably ahead of the industry norm.
“And our mission is to continue to raise the profile of Molson Coors in Scotland as one of the most forward-thinking and supportive brewers in the marketplace.”