Glendola Leisure Group gets in on the beer scene in Glasgow

In Scottish brewing, shilling categories were once based on the price of a beer per hogshead, which is one explanation behind the name of multiple operator Glendola’s latest concept, The Shilling Brewing Co.
The other is that the name pays homage to the new venue’s previous life, occupying the former Bank of Scotland building on the corner of West George Street in Glasgow. 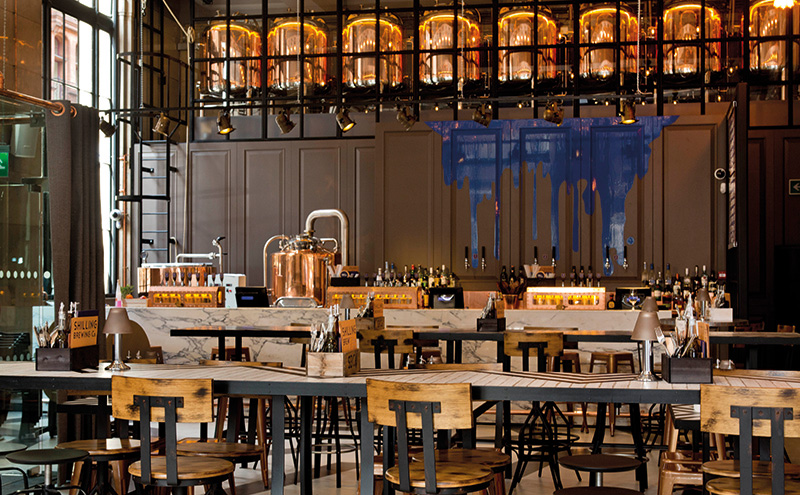 Whatever meaning customers wish to take away from the name, what’s clear is that the team behind the new venue is serious about beer.
A project that’s been a long time in the making, with Glendola’s in-house team getting down to business on the initial designs over a year ago, Shilling Brewing Co. is the result of an overhaul of the firm’s former Horton’s unit – complete with the installation of a working brewery behind the bar.
The brew aspect of the new business is hard to miss. With eight brewing vessels perched on a platform above the bar and a working mash tun and boiler operating behind the bar, the bespoke kit is far from display purposes only, as it produces the venue’s own in-house brews.
Getting the brewpub’s doors open has been a big job, representing a £1.5 million investment from Glendola and close to six months of refurbishment work, but it was a process which operations director Matt McKenna said was “remarkably smooth”, thanks in part to the solid work carried out by contractor and shopfitter Hugh Stirling.
Smooth sailing might not be something to expect for an operator entering into new territory, but the latest Glendola venture is an extension of the approach the firm has been taking to its new units in recent years, according to McKenna.
Highlighting nearby sister venues Gordon St Coffee and Alston Bar and Beef as examples, McKenna said finding a gap in the market is the key.

“We looked at what was missing in the city centre of Glasgow and we’ve done the exact same for here,” he said.
Bolstered by the success of previous outlets that have aimed to exploit a niche, Glendola closed the doors on its Horton’s unit after a final day of trading on Hogmanay last year and got to work creating Shilling Brewing Co. as the firm’s first bar built around beer.
Euan Robb, group sales manager for Glendola, reckons tailoring the offer has been the right move.
“It’s very easy to dilute your offering,” said Robb, “but we’ve been very specific.
“We think that’s really worked and people have bought into that.”
With Shilling Brewing Co., Glendola looks to be asking its customers to buy into a bar with brewing at its heart, but without excluding customers who are not necessarily craft beer aficionados.
McKenna described the new-look venue as a “designed environment”, with the firm returning to James Dilley of Jestico & Whiles, who previously worked on Alston Bar and Beef for Glendola.
Dilley’s design strikes a balance between clean-cut and industrial throughout. From the poseur tables and boothed seating, complete with brewer hop-patterned fabric, to the ‘SBCo.’ branded floor planks on a raised stage area by the windows overlooking West Nile Street, and bespoke chevron-inlaid metal tables manufactured by Hugh Stirling, the Shilling Brewing Co. interior isn’t shy about its contemporary design credentials.
The beer taps, in particular, combine form and function in their design, with bespoke copper, steel and glass ‘beer boxes’ below the font. Designed in the style of a safe, the beer boxes include a clear glass pane which showcases the beer to customers as it is dispensed, a feature which Michael Kelman of project manager and local architect JA Leask described as both “visually stunning” and a “balance of art and functionality”.
Another eye-catching amenity is the venue’s pizza kitchen. Visible at the rear of the venue, Shilling Brewing Co.’s pizza chefs can fire out a fresh pizza in ten minutes using an authentic stone oven, offering customers food to accompany their beers until midnight.

While there’s eye-catching attention to detail throughout, on a first visit, the feature that may be most likely to make a lasting impression is the venue’s 20-foot high unicorn mural, which was created by local graffiti artist Gaz Mac.
Robb said the mythical horned horse was chosen in part because of its cultural connection as Scotland’s ‘national animal’, which could go a way to explain why there’s more of the wild danger of the Kelpies in Mac’s work than the wonder of a little mermaid, with a final lick of paint set to restrain the unicorn with gold chains.
Despite the design-led nature of the Shilling Brewing Co. revamp, the original interior still shines through, from the old bank’s grand marble walls – softened by unkempt black window frames – to exposed old copper piping juxtaposed with the shining new copper of the brewing kit.
And it’s the brewing kit that sets Shilling Brewing Co. apart from other Glendola outlets.
Ordered and installed from Brewing Vessels Ltd, the brewkit – operated by head brewer Declan McCaffery, formerly of Clockwork Beer Co in Glasgow’s south side – works as something of a self contained system from malting to pouring.
Once the brewing process gets started, the liquid moves from tanks behind the bar through pipes to a basement level fermenting room and then from there to the large tanks above the bar first for conditioning and then into one of three serving vessels.
At the moment, Shilling Brewing Co. beers are poured from four of the venue’s fourteen beer taps, but this should grow in the coming months as McKenna has set a 50/50 split at the fonts as the eventual goal.
Looking ahead, McKenna and Robb both expect a private tasting room located by the basement fermentation room to come more into the fold, hosting a range of events.
The main goal for now though, McKenna reckons, is to “build up a following of beer lovers”.