Scottish business owners and trade groups have renewed calls for the government and local authorities to rule out so-called ‘tourist bed tax’ proposals. 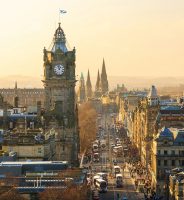 The fresh calls were made in the wake of the latest poll on the issue conducted by the Federation of Small Businesses (FSB), which revealed four in five Scottish small firms oppose the measure.
The survey of 682 firms found 82% of respondents were against the introduction of a levy on visitors’ accommodation bills. Opposition to a levy on tourist accommodation was even stronger among tourism businesses, with 88% of survey respondents from the sector rejecting the proposals.
The introduction of an additional levy on visitors to Edinburgh has been mooted for a number of years.
Speaking to SLTN earlier this year, City of Edinburgh Council depute leader Sandy Howat said a tourism tax “would make perfect sense as we aim to offset public funding cuts and invest in our city”.
Colin Borland, head of external affairs for the FSB in Scotland, said that while the group understands that “public sector budgets are under pressure”, the FSB “cannot support the introduction of a regressive tax on visitors”.
“Tourism is a key industry for Scotland and the ambitious targets we have to increase the number of return visitors could be undermined by these proposals,” said Borland.
Marc Crothall, chief executive of the Scottish Tourism Alliance (STA), said: “Despite tourism being acknowledged as the country’s most important industry, it is increasingly challenging for Scotland to remain competitive as a destination.
“Therefore applying a further cost to visitors is, in our opinion, not a sensible approach to take.”
Willie Macleod, executive director in Scotland for the British Hospitality Association (BHA), said the trade group “believes that it is iniquitous to single-out and penalise overnight visitors to pay an additional tax simply for visiting a destination and making a contribution to the local economy”.