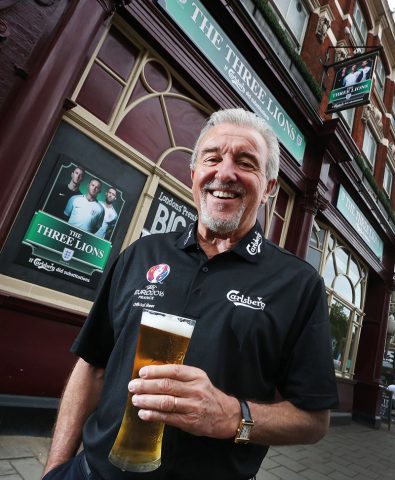 Carlsberg has ramped up marketing activity ahead of Euro 2016, offering on-trade outlets a range of resources to help them make the most of this summer’s football tournament.
Kicking off in Paris tomorrow (Friday June 10), Euro 2016 represents a big opportunity for pubs, according to Carlsberg, which said its own research shows that football tournaments are worth over £60 million to the UK on-trade and that live football can add an uplift of 60% to an outlet’s rate of sale.
The brewer, which is the official beer sponsor of this year’s tournament, has been distributing Euro 2016 point of sales kits to publicans throughout Scotland, England and Wales in preparation for the month-long festival of football, with packs including Euro 2016-branded fixture posters, planners, flags and wigs which Carlsberg said will help “add to the consumer buzz surrounding games”.
Carlsberg UK has also relaunched its Premier Sports Club, a digital tool offering licensees support including resources for social media content to help drive footfall on match days.
Liam Newton, marketing vice president for Carlsberg UK, said the firm is making use of its “brand credentials” and “unique role as the official beer of UEFA Euro 2016” to “support pubs to deliver an incredible experience for their customers, beer-lovers and football fans over what promises to be a huge summer for the on-trade”.