At more than two centuries old and boasting Robert Burns as a past guest, who not only dined and stayed overnight but etched the ‘Stirling Lines’ about the nearby castle’s state of disrepair at the time on a pane of glass in the bedroom window, The Golden Lion Hotel in Stirling is steeped in history. 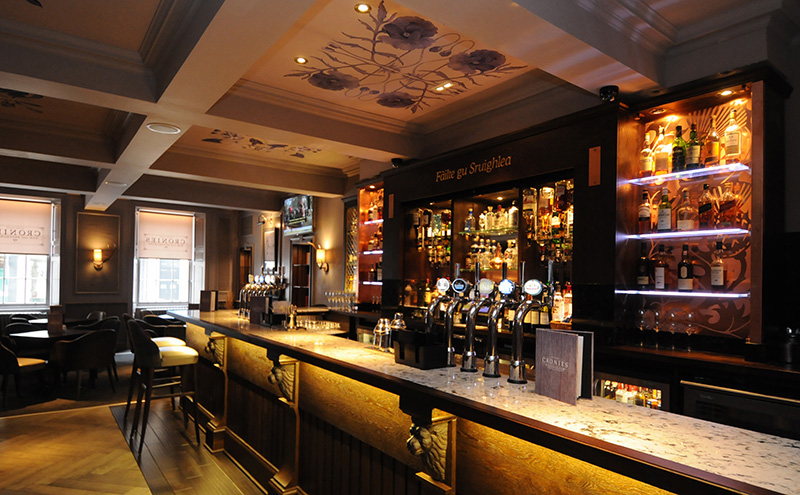 The King Street property has been welcoming guests since 1786 – the year before the Bard checked in with a couple of his cronies; and there are subtle references to the hotel’s links with Burns – he is said to have returned later in the year 1787 and smashed the pane of glass on which he had written the verse after learning it had caused offence – throughout, with a copy of the Stirling Lines now etched on one of the glass doors leading into the bar.
Further nods to the Burns connection have been made with the newly refurbished bar and restaurant, Cronies.
As Paul Waterson, who has owned the 66-bedroom Golden Lion Hotel since 2002, explained, the overarching aim of the revamp was straightforward.
“We wanted to give it its own identity,” he said.
“Before, this was mainly used as a residents’ bar and restaurant; yes, people who weren’t staying in the hotel would come in but it wasn’t really seen as a venue in its own right.
“The idea was to give it its own identity; and the brief was contemporary Scottish. We’re very close to the castle and we wanted something Scottish but we were clear we didn’t want it to be kilts and haggis.”
Scots designer Ranald MacColl was tasked with creating the interior design for the space, with shopfitting contractors Hugh Stirling and project manager BCC bringing the new venue to life.
The result of the six-week refurbishment is a venue which successfully blends contemporary design with a distinctly Scottish flavour.
Directly opposite the entrance, the new bar, which is about six feet longer than its predecessor, has a white granite top and dark wood frontage, which is down-lit and features carved lions’ heads at intervals along the bar.
The use of dark wood continues on the gantry, which bears the greeting ‘Fáilte gu Sruighlea’ (welcome to Stirling). 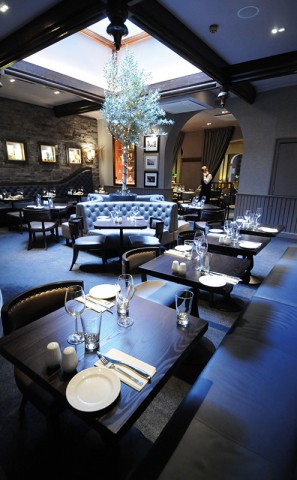 The mirror and glass shelving area below is flanked on either side by two distinct sections of glass shelving backed with copper panels featuring a contemporary thistle design; a ‘cut out’ version of the same design features on removable copper panels which secure the sections at night and are displayed on the walls when the bar is trading.
The taupe wall and ceiling colour is punctuated by purple painted designs of different flowers in the ceiling recesses and antler-style light fittings, while the floor features both carpet and wood in a herringbone design.
In the bar area, dark wood tables have been paired with seats upholstered in taupe leather and plaid fabric; there are blinds bearing the Cronies logo in the front windows; and there’s a picture of Robert Burns and some of his cronies above the fireplace.
The Burns references continue in the adjoining 60-cover restaurant, with a selection of objects displayed in glass-fronted boxes set into the exposed stone wall.
The area, which is separated from an additional 100-cover restaurant space by heavy drapes, continues the taupe colour scheme and is furnished with dark wood tables, free-standing curved booth-style seating upholstered in taupe leather, dark blue leather banquette seating, and dark wood chairs upholstered in either taupe or dark blue leather.
And it’s not just the interiors of the bar and restaurant that have been freshened up.
New menus have been introduced and the drinks offer overhauled, with a bigger focus on Scottish produce. Edinburgh-based Solid Liquids provided training for Cronies’ staff in the new drinks offer, which includes three different whisky flights and a range of Scottish gins from across the country, including local Stirling Gin.
“We want to show off Scottish produce in contemporary Scottish surroundings,” said Paul.
“We wanted to give the people of Stirling something different, something more than they might expect.
“I think people like it.
“At the end of the day, the hotel has been here since the 1780s; we’re just passing through – we’re the custodians.
“It’s Stirling’s hotel; we just want to give something back and contribute something to Stirling.”