Sitting by a crackling open fire in the heart of their newly renovated pub, The Old Mill in Killearn, the ambition of Alice and Mark Silverwood is abundantly clear as they talk passionately about their business.

Having long shared the dream of owning their own pub, the couple now has not one but two outlets – after first taking on The Inn at Kippen in January 2014 before acquiring the lease of The Old Mill in April last year.
“Well, we’re both very ambitious and both enjoy what we do and we’d heard a lot about this pub, about the Mill, and people saying it was a cracking pub and that it was always busy and when we heard it shut down a little seed got planted and we started thinking,” Alice told SLTN.

Early success at The Inn at Kippen was a catalyst.
Soon after they took the helm of the pub in the Stirlingshire village of Kippen in January 2014, Alice and Mark said locals told them it was a great model for future expansion.
The Inn, which has a staff of ten, operates as a B&B with four double rooms and a bar as well as a 70-cover restaurant which has been recommended in this year’s Michelin Eating Out in Pubs Guide.
Having set such a high standard with their first venture, Alice and Mark sought to continue in a similar vein at The Old Mill.

It was important to the couple that locals – many of whom are long-standing customers – were happy with the changes they were making at the pub.
For Alice, getting the right atmosphere and look were key to the recent renovations. “You get a feeling when you walk into a place and I think if it’s a bit off you’re not quite sure,” she said. “Like they say with houses, you decide looking around in the first few seconds, it’s much the same here.”
The result is a pub which is rustic and cosy, yet modern.
Features include contemporary light fittings with exposed bulbs, a reclaimed timber bar and old barrels that have been re-purposed as seating.
The Killearn pub can accommodate 40 covers, with seating for a further 25 thanks to a yurt; and there’s a team of between 12 and 15 staff who Alice said work “extremely hard”.
She said: “We’ve been really lucky at both places with our staff, they’re very hardworking and motivated. “They work really hard; in the kitchen there is no frozen food, it’s all freshly prepared. There are easier ways of doing it, but it is noticeable in the food that no corners are cut.” 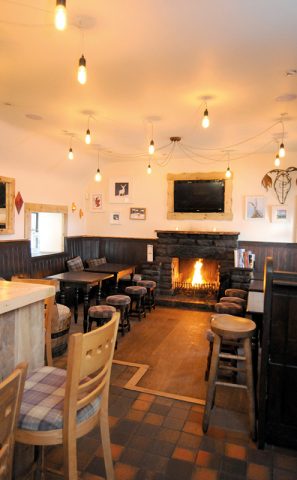 For Alice and Mark, a big part of running rural pubs is ensuring visitors receive an authentic Scottish experience.
To deliver this, they work with local suppliers, including J Gilmour Butchers, to ensure their menus are filled with local, seasonal produce.
The Silverwoods stay local when it comes to drinks suppliers too, sourcing craft beers from Fallen Brewing Company near Kippen. They also use Belhaven for their main draught range, WoodWinters for spirits, and Tim Moss, who owns IEC Wine, for their wines.
“I think there’s a lot to be said for having a good relationship, a personal relationship with your suppliers, it’s easier I find,” said Alice. “If we can use a local supplier we’d rather do that.”
The focus on local produce and high standards at both The Old Mill and The Inn at Kippen is credited with helping the two businesses avoid a major downturn in the wake of the lower drink drive limit, which is said to have hit rural pubs hard.
Alice and Mark reckon their pubs’ quality food and live entertainment offers in particular have helped mitigate any potential impact.
The couple also consider themselves lucky with the locations of both pubs, as locals continue to visit regularly.
“Most pubs could do with people to be as supportive as we’ve found both villages to be with us,” said Alice.
However, she does feel that, in general, attitudes towards pubs need to change.
Instead of being viewed by some simply as places in which to consume alcohol, Alice said she wants people to come in and feel comfortable simply ordering food.
“We want it to be somewhere that they can come in, take a paper, [use] their laptop, have a coffee and a bowl of soup,” she explained.

Looking ahead, the couple aim to push the live entertainment at The Old Mill, including setting up their own music festival.
As for The Inn at Kippen, the Silverwoods aim to continue to focus on food and are planning to alter the layout to add a fifth bedroom.
Beyond that, and having taken on two pubs in just two years, the couple said they simply want to continue delivering an authentic Scottish experience for locals and visitors at both pubs.
“I think we’re going to get our heads down, not take over any more pubs for now and work on these two and get it really solid,” said Alice.