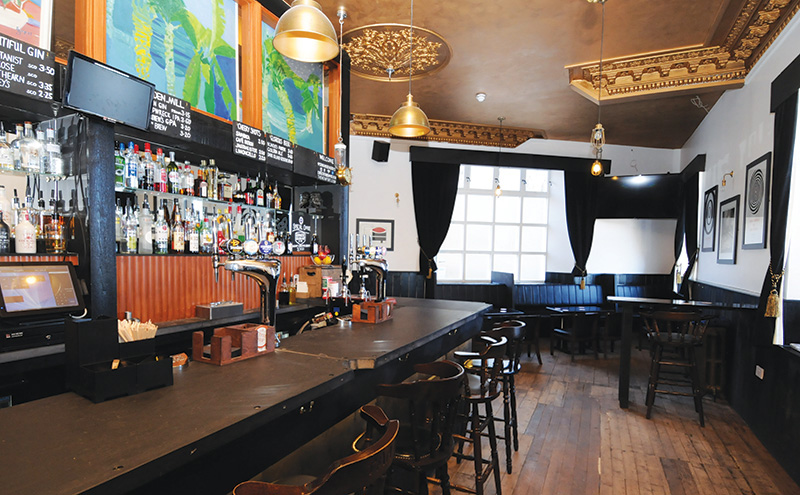 Regeneration is the name of the game on the banks of the River Tay – and while Dundee’s waterfront development has been grabbing headlines, an entrepreneurial couple have been cracking on with their own project across the water.
On the site of the former Newport Hotel in the village of the same name, The Newport is up and running following a revamp intended to offer a fresh take on a village pub.
Previously operating as a public bar, The Newport is now something of a hub – trading as a bar, art gallery, chiropractors’ clinic, letting room business and restaurant, which opened for business on March 1 with Masterchef The Professionals 2014 champion Jamie Scott at the helm.
The whole business is housed in a restored A-listed building and modern purpose-built extension.
It’s the vision of owners Mark and Marie Cashley who are also the practising chiropractors on site.

The Newport bar manager, Craig Moir, who was working at the venue when the Cashleys took it on, said the changes the pair have implemented have been well-received in the local community.
“I’ve worked here for six years, even previously when it was a local watering hole,” said Moir.
“It was great, the locals are very friendly, but we were catering to a tiny percentage of the surrounding area.
“It must have been about three years ago Mark and Marie purchased the place and set up a blog saying what they wanted to do with it.”
The Cashleys’ vision for The Newport may have been welcomed by the locals, but bringing it to reality hasn’t been without its challenges.
Built in 1806, The Newport is a category A-listed building. 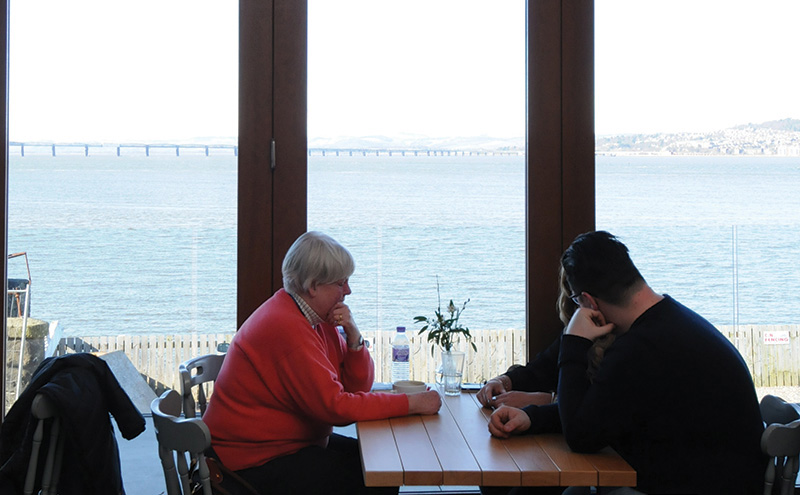 While the building’s heritage is the source of some striking features which have been retained, respecting the building’s history didn’t make for a speedy revamp.
“[Planning] was a drawn out process with it being a grade A-listed building, that took ages for it to get through,” said Moir.
“So [the Cashleys] began work on the extension over the last year and a half. We got the upstairs bar open during the last year and [the main bar] in July.”
The revamp of The Newport was nothing short of a major construction job, with the restoration work on the original building accompanied by the construction of a two-floor extension to create a restaurant area overlooking the River Tay.
Working with architects Kennedy Twaddle, the Cashleys have created a venue which blends the contemporary with the classic, with more than a few nods to the history of the area.
The Newport design was influenced by the Cashleys’ chiropractic background, according to Moir, who said the pair took a ‘salutogenic’ approach to the process – a term from medical sociology which describes an approach to health focusing on factors that include a pleasing environment.

“It’s like green architecture, being in a positive building is going to make you feel better.
“Our dream for the place is being the best local pub you can be.”
It turns out creating a quality local bar takes a lot of work and Moir said the main bar area in the original building was gutted.
“We saved as many of the original features as we could,” he said.
“There were two false ceilings in [the bar] so the roof came down and we found all this cornicing and we kept all we could.”
The finished bar area is a blend of warm woods against a black and gold colour scheme.
Local history has been brought to the fore, too.
An old Morton’s of Dundee crate used for transporting vatted whisky, which was found in the building, has been replicated in the shape of laser cut panelling on the walls by the bar area.
A painting, which features locals who were involved in the revamp project resting on a steel beam overlooking the Tay, also hangs in the bar. 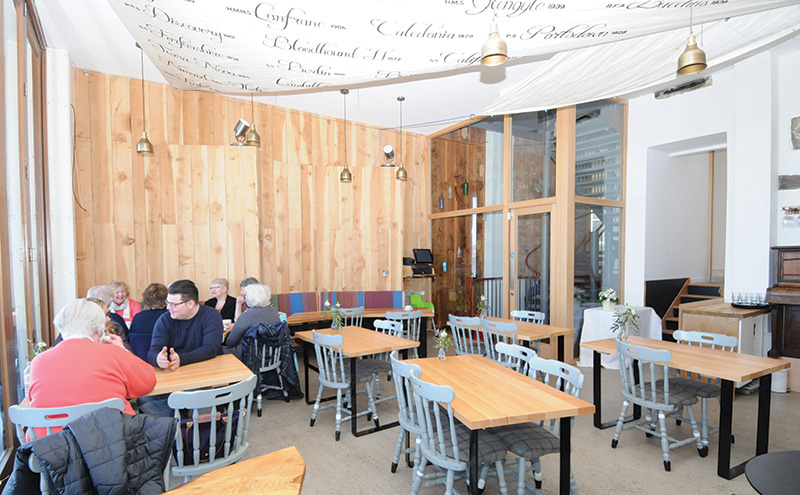 Nods to the local area are also present in The Newport’s extension, which houses the restaurant over two floors, each of which can accommodate 32 covers.
In the ground floor dining area, a feature wall has been created with a stove which is flanked by exposed sections of the building’s original external wall.
The ceiling of the room is bedecked with ship sails procured from one of the pub regulars and featuring the names of around 30 ships that were built in Dundee over the years, while an old piano has been repurposed as shelving space; its keys have been utilised as a wine rack.
The restaurant serves as the heart of The Newport, Moir said, as it is accessible from the bar area, art gallery and staircase from the venue’s four letting rooms.
The restaurant may be central to The Newport, but the engine room is beneath the bar, where a fully revamped commercial kitchen has been kitted out to chef Jamie Scott’s specifications.
And while the construction work caused a bit of buzz about The Newport in the town, Moir said nabbing the Masterchef champion to run the kitchen ramped the excitement up even further.

“There [was] a lot of buzz which increased exponentially over the last few months since we announced we were getting Jamie in,”

said Moir.
The chef runs the restaurant with his wife Kelly, who heads up the front of house. He was brought onboard six months before opening, although Moir said the team tried to keep the appointment under wraps for a while.
“It was all hush-hush,” said Moir.
“This is the first restaurant that he’s put his name to. He’s going to be serving modern Scottish cuisine. It’s not fine dining, it’s fairly priced small plates with prices ranging from £7 up to £18 a plate.”
The Newport menu will all be seasonal, Moir said, with the commitment to locally sourced produce even extending to Jamie and Kelly foraging for ingredients around Fife.
Appointing Jamie may have grabbed headlines in the local press, and Moir does expect the restaurant to shine, but he added that the vision for The Newport is for it to be seen as a single seamless operation.
“We don’t want people to think ‘we’re in the Newport bar’ or ‘we’re in the restaurant’,” said Moir.
“We want it to feel blended as one.”
That vision of The Newport has come a long way, but it isn’t finished just yet.
For their next trick, the Cashleys plan to complete the ongoing revamp of a 50-cover function space adjacent to the upstairs dining area, and then it’s on to reclaiming land from the sea.
A collapsed sea wall to the rear of The Newport forms part of the property and Moir said the next big job will be to reclaim this spot from the elements to build artist studios, adding another string to the Newport’s bow. 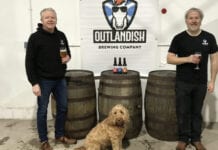