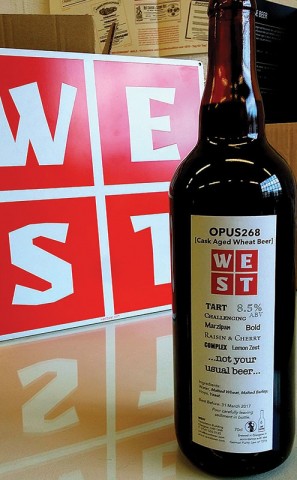 Glasgow-based brewer West celebrates its tenth anniversary this month, and the firm is marking the occasion with the launch of a limited edition cask aged wheat beer.
The anniversary beer, Opus268, is a Weizendoppelbock (German wheat beer) which has spent 268 days in a 30 year old Highland whisky cask.
West founder Petra Wetzel said the limited edition beer is a “bold and complex” brew with “strong notes of lemon zest, marzipan, cherries and raisins”.
“Tart and spicy, the whisky, a defining feature, shines through and brings warmth with it – and at 8.5% ABV it packs a punch,” said Wetzel.
West opened as a full production brewery in the Templeton building, by Glasgow Green, in 2006. The brewery also trades as a bar and restaurant at the Templeton site and opened its second venue, bar and restaurant West on the Corner, in Glasgow’s west end in 2015.