At more than 300 years old, The Mill House in Stewarton – the newest venue to join the Buzzworks stable – is the oldest property the company has refurbished.
Its location also represents the smallest town in which the Ayrshire group operates, and it’s the furthest ‘inland’ from the company’s Prestwick base. 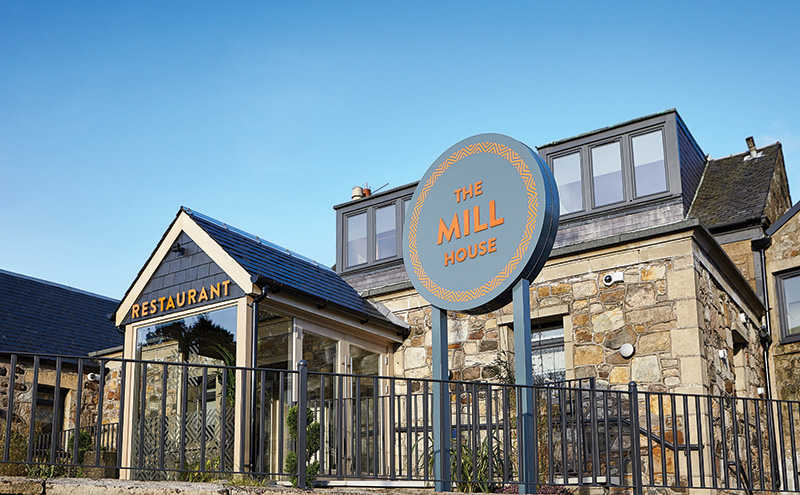 Despite its differences to the existing venues in the portfolio, which, apart from The Longhouse in Kilmarnock, are located in the coastal towns of Ayr, Prestwick, Troon and Largs, The Mill House “ticked a lot of boxes” for Kenny, Colin and Alison Blair – the siblings behind Buzzworks.
“We had a good gut feeling about it,” Kenny told SLTN.
“Stewarton is a small town – the smallest we’re in – but for all that the population is around 8000, there’s 13,000 within three miles of the town centre and about seven roads leading into it.
“It’s also got a good high street. One of the things we looked at when we came to see the property was the number of empty shop units and there weren’t any.
“And it’s within the hour from Prestwick. We’re still in Ayrshire but this is the furthest up we’ve come.
“It’s a big property and it has a lot of history – it’s the oldest we’ve done.
“It ticked a lot of boxes for us.” 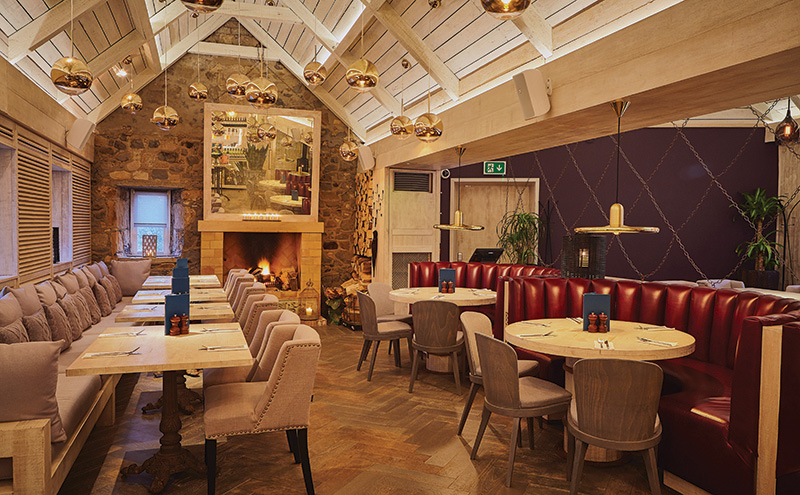 Boxes ticked, Buzzworks bought the pub in January 2015 and assembled a team of design and refurbishment specialists it has worked with before, including designer Jim Hamilton, Kilmarnock-based Transition Interiors, project managers BCC QS and Murray Timber Products.
The brief for the project, which was completed between last June and November, was to create an interior which was contemporary yet traditional.
Aside from the addition of a glass vestibule at the front of the property, the external footprint of the stone building remained as was.
Inside, however, was a different story.
With the previous interior stripped out, the team had a blank canvas in which to create the new look.
The large L-shaped main space, which can accommodate 100 covers, has been ‘split’ into distinct areas through the use of different styles of furniture and the central positioning of the bar. 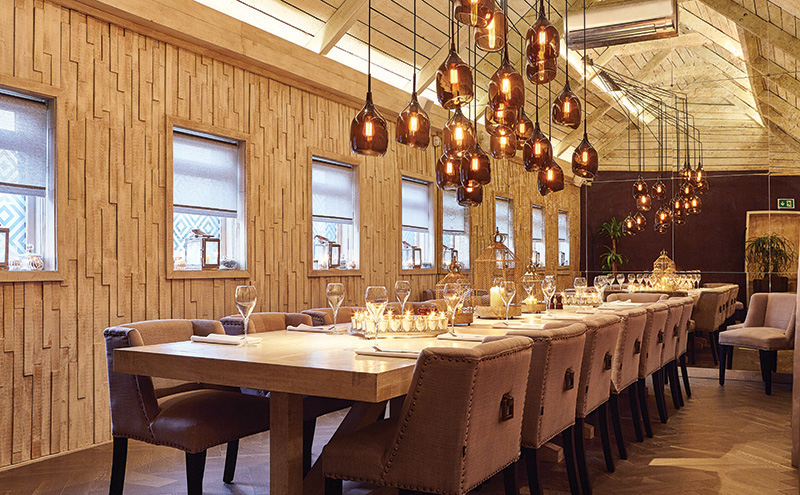 Wood features throughout the main space – from the grey parquet flooring and light wood panelling on some of the walls to bespoke tables and exposed beams in the ceilings of the main restaurant and private dining area; its use was key in achieving the desired “light but warm” look.
The bar itself, which has a frontage clad in small white hexagonal tiles with a deep border in black hexagonal tiles at the base, has a chunky light-coloured wood top inlaid with white panels, and a glass-backed gantry featuring the same wood.
Light wood panelling has been used on the walls and ceiling in this area, and, opposite the bar, there are a number of two-seater booths with square wooden tables and grey leather upholstery – each with its own smoked glass light pendant overhead.
The light almost New England-style look continues at the far end of the bar where there are two larger booths separated by glass panels, and grey banquette seating and tables opposite.
Beyond the bar, down a couple of steps, a ‘snug’ seating area has been created where the bar was previously positioned. It has a lower ceiling and is furnished with four large round booths upholstered in red leather, bespoke round wood tables and chairs upholstered in a stone-coloured linen fabric, with large planters, mirrors and candles adding the finishing touches.
Through in the main restaurant space and private dining area it is the vast vaulted ceilings which draw the eye initially.
Exposed light wood panelling and beams have been made a main feature, with uplighting, mirrored globe light pendants hung at varying heights the length of the ceiling in the restaurant area, and a central light feature in smoked glass in the private dining area. 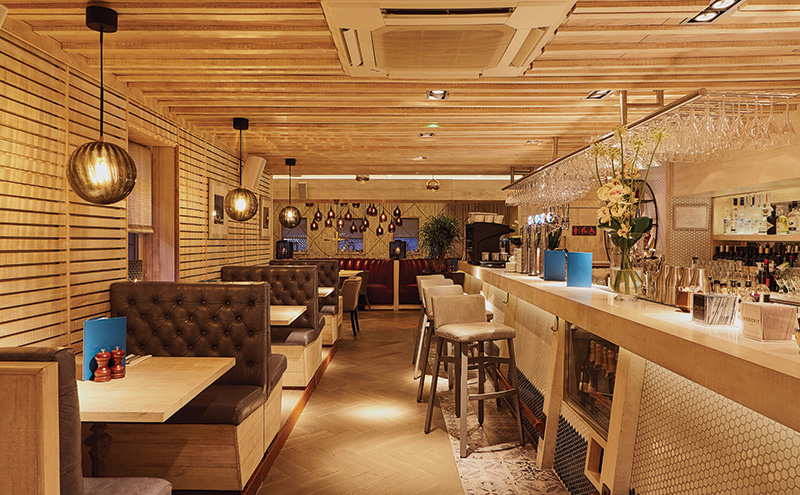 The private dining area itself is separated from the main restaurant area with a chain feature in a lattice design; there’s also a curtain which can be drawn for more privacy. It’s furnished with a long light wood table and chairs upholstered in the stone-coloured linen fabric, and features one wall clad in wood panelling, one in large square mirror tiles and one in a deep plum colour.
In the adjacent main restaurant space, features include exposed stonework, an open fire with a large antique mirror above it, banquette seating upholstered in taupe fabric with cable-knit cushions running the length of the area, and three of the round red leather booths which feature elsewhere in the venue. There’s also an open kitchen at the end of the space.
The overall look is one that’s “light but warm”, said Kenny.
“The brief with this was traditional with a modern twist; we’re really pleased with it,” he said.
“It’s very light but it’s still warm and that’s a real trick. Jim [Hamilton] is great at coming up with new ideas and new ways of doing things.
“We worked with people who have done some of our other venues and they’re great to work with.
“In terms of design, we try and appeal to everyone; we’re very inclusive with our designs.
“We open early for breakfast and coffee – that’s a big part of our business now – so we need to create somewhere that everyone feels comfortable. It’s all about making people feel great – that’s our aim.”
The Mill House project also took in the separate public bar, which can be accessed from the restaurant or via its own on-street entrance.
Described as a contemporary take on a traditional pub, the space also features a lot of wood – this time dark grey – as well as more exposed stonework and seats upholstered in dark green leather.
And Buzzworks is not quite finished with The Mill House yet.
There are six rooms and a flat upstairs which the company plans to develop into seven or eight letting rooms within the next year.
For now, The Mill House is continuing to trade very well – although Kenny is quick to stress that it’s still early days.
“It has exceeded our expectations but we’re still in the launch phase – it opened at the end of November and it’s only February; September or October will tell us more,” he said.
“We’re not getting carried away but we’re really pleased with it.”