A brewery in Aberdeenshire has been given a new lease of life after an extensive investment and rebranding exercise by its new owners. 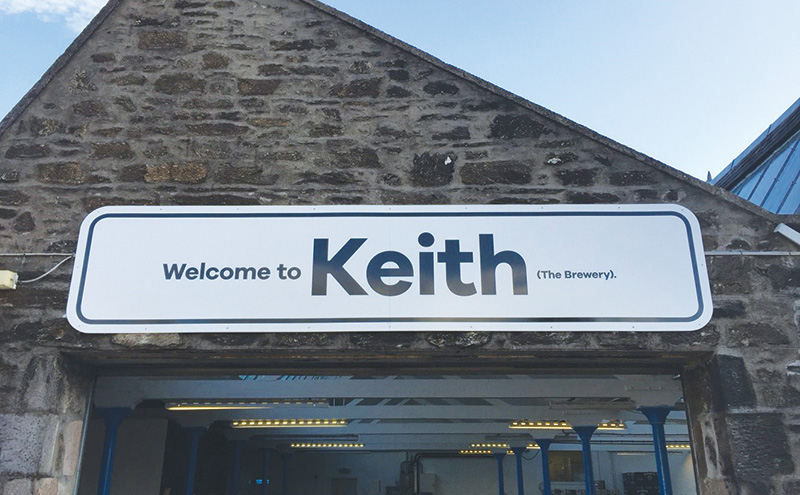 Keith Brewery, in the town of Keith, was bought by businessmen Scott Carnegie, Graeme Hay and Donald Smith in late 2014. Formerly known as Brewmeister, the company was overhauled during 2015 and relaunched as Keith late in the year.
Around £400,000 has been spent upgrading the brewery, which is now capable of producing 14,000 bottles and has the ability to bottle and label its beers on-site.
Domestically, the company’s range has been rebranded (the beers are still branded Brewmeister in export markets) with the quirky names of Larger Keith (4.5% ABV lager); Herr Keith (4.5% ABV wheat beer); Pale Keith (5% ABV IPA); Sir Keith (10% ABV barley wine ale); and Stout Keith (5% ABV stout).

And now, with the new branding in place, chief operating officer Andrew Chapman has been tasked with growing the business and building the brand’s presence in the on-trade.

The first step was securing a listing with wholesaler Wallaces TCB, which kicked off at the start of this month. Further wholesaler listings are expected to follow in the coming months.
Chapman told SLTN he thinks the key to success will be catering for both hardcore craft beer drinkers and more general beer fans.
“Yesterday I was out in craft beer bars and we’re trying to get as much feedback as possible,” he said.
“But it’s appealing to all sections, all beer drinkers.
“You want to be appreciated by the craft beer enthusiasts, but at the same time you want to be that brand people – the general drinking public – recognises.
“It’s a fine line. Because you can go too corporate, and then the craft beer guys don’t feel you’re a real craft beer, but if you go too much on the craft beer side you can put people off. It’s another reason for the plain branding – just to get people’s attention.”
The boom in craft beer in recent years has been well-documented, and despite the growing number of beers and breweries across the UK, Chapman is adamant that there is still plenty of room for growth in the Scottish on-trade.
“More and more people are shifting from your [big brands] towards craft,” he said.
“You’re getting more and more craft on tap now, because of the volumes people are drinking it in.
“So there is still scope to grow, and grow massively.
“Make no mistake, we’re not just talking about a couple of per cent here. The craft beer industry can still grow and get even bigger, even stronger.”
And it’s not just about growing the category in terms of sales.
Chapman reckons that, as even more bars and drinkers embrace craft beer and start experimenting with different beers and different styles, it could result in the category broadening from its current IPA-heavy style.
It’s a cycle he witnessed earlier in his career, when he worked for spirits firm Maxxium UK.
And he encouraged publicans who haven’t yet tried stocking any craft beers to give the category a go.
“There’s nothing to be intimidated about,” he said.
“The great thing about craft beer is you don’t have to take it on draught straight away.
“You don’t have to worry about giving up one of your main lines to craft beer. You can take it on in bottle form, and if it goes well you can move up to cask or keg format.”