A small unit on a North Lanarkshire Council-owned industrial estate may not be the most glamorous place to brew beer – but it’s a step in the right direction for brewer Craig Laurie of Lawman Brewery.

Brewing with a five-barrel set-up built by Oban Ales, Laurie is producing beer on a far larger scale than his last premises: an HMRC-registered business operating out of his flat.
And although Lawman Brewery was only incorporated as a business as recently as October 2015, Laurie, whose first ambition was to enter the legal profession after graduating with a law degree from the University of Aberdeen, isn’t a novice when it comes to brewing beer.
His beer education began in Aberdeen when he worked as a bartender at Belhaven pub Prince of Wales.
“When I was working in [Prince of Wales] it was a proper real ale pub and my manager Steve taught me how to taste beer,” Laurie told SLTN.
From there, he moved south to Edinburgh, taking a job at Whisky Trail on the Royal Mile. In this role, Laurie said he pushed to boost the shop’s Scottish beer range which led to his first dealings with Williams Bros director of sales Richard McLelland – a contact that would prove helpful further down the line.

From the Whisky Trail, Laurie took up a sales position at Diageo, marketing Smirnoff products to the convenience sector.
However, the law man’s passion for beer couldn’t be quelled and an advert at the Paisley Beer Festival for a brewing assistant at Williams Bros set Laurie on the brewing path.
“When this advert came up I applied for it and sent Richard [McLelland] an email asking if it was the right thing to apply for,” said Laurie.
“He said he would put in a good word but couldn’t promise anything.”
Laurie got the job and started at Williams Bros on the lowest rung, cleaning casks and shifting equipment around the Alloa brewery; and after six months he started to get involved in the brewing process.
In his three and a half years at Williams Bros, Laurie progressed to assisting the head brewer, which led to him carrying out brewing and recipe work, while Williams Bros funded Laurie through his brewing certification with Heriot-Watt University.
With brewing experience under his belt, Laurie got to working on his own projects at home, creating recipes in his flat with the blessing of an understanding wife and a curious Lhasa Apso – the dog was one of the first beneficiaries of the brewery as Laurie started making dog biscuits from spent grain after use in the brewing process.
Not content with back-room brewing, Laurie sought out investment and was able to secure a meeting with investor Tam Gardiner of Scotch Whisky Auctions in the Bon Accord, Glasgow. 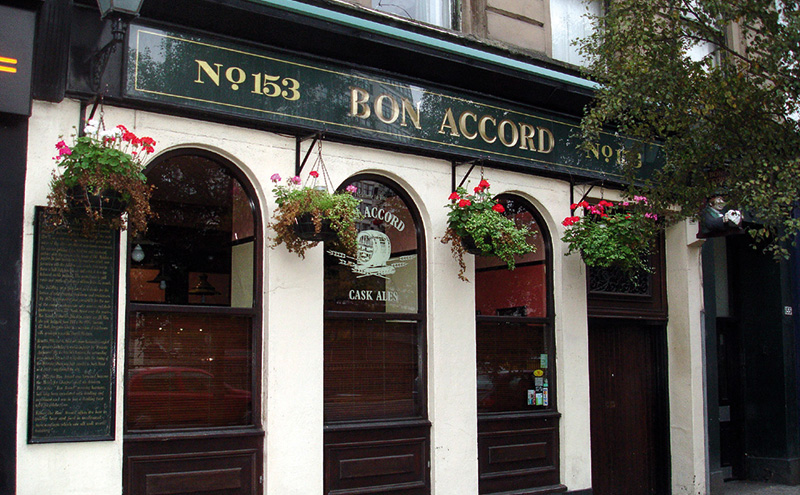 The pub’s owner and friend of Gardiner’s, Paul McDonagh, joined the meeting giving Laurie the chance he needed to secure two investors with industry knowledge.
Production is now well and truly up and running at Lawman Brewery.
The industrial unit was fully kitted out during a three-month project, which included installing drainage, improving the electrics and even saw Laurie laying tiles himself; now the brewery is producing 20 casks per week.
And while the new brewery may be a big step up, Laurie said the days of brewing in the flat were time well spent as it allowed him to hit the ground running with five core beers.
“The recipes I’m using now are scaled up versions of what I did in the flat,” said Laurie.
“It’s like scaled up cooking.”
Distribution for Lawman Brewery is expanding too.
Laurie’s distribution network has until now solely consisted of himself, a car and some casks in the back, but after reaching an agreement with Glasgow based Alesela Distribution in January, Lawman Beers can now be distributed beyond the central belt.
“They’re moving the stuff up to Aberdeen, Dundee and out to Ayrshire,” said Laurie.
“The next big thing is cross-border (England) distribution.”
It’s been a busy time for Laurie.
With the brewery still a one-man band, 12-hour shifts in the Cumbernauld unit aren’t uncommon.
But he isn’t showing any signs of letting up.
Laurie said he will be attending beer festivals in Paisley and Glasgow this year, and has ambitions to appear at CAMRA’s Scottish Real Ale Festival which returns to the Edinburgh Corn Exchange in July.