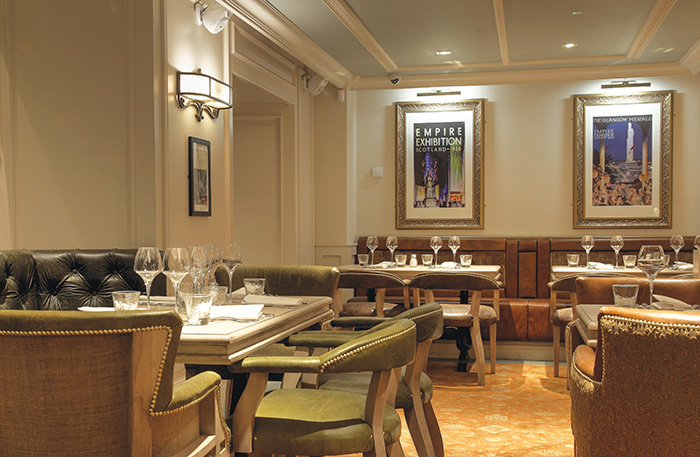 And while there’s no shortage of Gallic influences in the latest venue from the Di Maggio’s Restaurant Group (DRG), it was a short-lived Glasgow eatery from the 1930s that provided much of the inspiration – and a link with its sister venue, The Anchor Line.
Located in the lower ground level of St Vincent Place, beneath The Anchor Line – the bar and restaurant launched in 2014 by DRG in the former booking office for the Anchor Line ships which sailed between Glasgow and New York – Atlantic takes its name from a French restaurant which The Anchor Line Shipping Company created in Glasgow’s Bellahouston Park for the Empire Exhibition in 1938.
The original Atlantic, the exterior of which was shaped like the bow of a ship, might have only traded from May to December 1938 before it was demolished along with the rest of the exhibition, but it provided no shortage of inspiration for its new namesake – offering a connection with its sister venue upstairs while giving the new brasserie its own identity; and that was key for DRG directors Mario Gizzi and Tony Conetta, who have owned the building since 2006.
“It was always part of the plan to do something with this (lower ground) space, we just weren’t sure what at first,” Mario told SLTN.
“But once we had the opportunity to see upstairs (The Anchor Line) trading, we decided. We tried to create another powerful brand that would stand on its own two feet.
“The Anchor Line operated the Atlantic restaurant as part of the Empire Exhibition in 1938 so we borrowed that bit of history from upstairs. 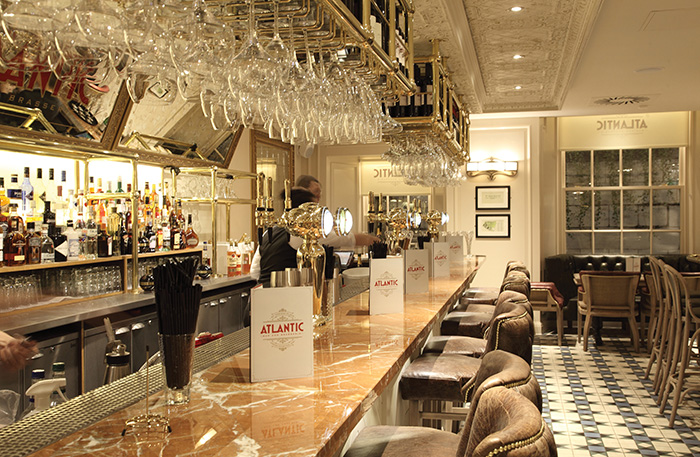 “We tried to tie it in with upstairs because it couldn’t be totally different but, at the same time, this had to stand on its own two feet and have its own identity.”
To achieve that, Mario and Tony again worked with the Anchor Line refurb team of Mark Brunjes of CM Design Consultants, Dimension shopfitting and project managers BCC QS on the 12-week, £900,000 refurbishment.
A key aim of the project was to make the lower ground level, which has its own separate entrance, as light as possible, so windows have been opened up, cream dominates the decor and antique mirrors have been used throughout the venue.
“Basement spaces can often feel a bit dark so we had to make it as light and airy as possible,” designer Mark Brunjes of CM Design Consultants told SLTN.
“We were lucky because there are so many windows along the front.
“And the mirrors make the space feel bigger and lighter. It’s one of the oldest tricks in the book but it works really well.”
The result is a light, bright outlet which feels more pavement level than lower ground. 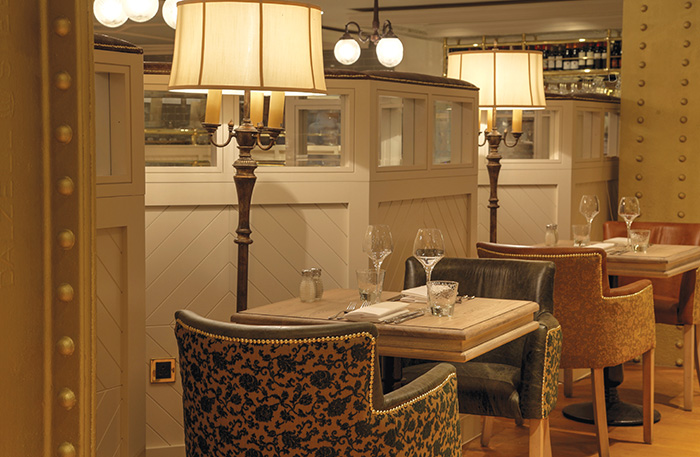 Although it’s one open space, the venue has been ‘split’ into a 120-cover restaurant and a bar area, which can accommodate 60. And these areas have been broken up further still with the use of different styles of furniture and flooring – wood, mosaic tiles in cream, black, blue and green, and carpet; and with cream wood and glass screens topped with brass-studded leather panels.
In the bar area, the marble-topped bar with cream frontage and brass over-bar wine and glassware holder dominates one side of the space, with a high marble-topped communal table and bistro-style chairs in the centre, and square poseur tables in light wood opposite.
Further seating areas in the bar have been created at the windows – with light wood tables and a combination of dark green leather banquette-style seats and chairs upholstered in deep red leather; and, at the back of the venue, where there are a couple of Louis XIV-style flock fabric-covered chairs with a low-slung table. There’s also a raised seating area at the rear of the space, furnished with a mix of banquette and booth seating upholstered in either green or brown leather.
The restaurant area, meanwhile, features various styles of furniture grouped together to create a different ‘feel’ in each space – from curved booth-style seating with round marble-topped tables and banquette seating upholstered in leather and velvet with light wood tables and captain-style chairs in green or tan leather, to high-backed banquette seating in flock fabric and tables with tub chairs. There’s also a chef’s table, which can seat eight, and a chef’s counter, giving diners full view of the open kitchen, which features a rotisserie and Robata grill. 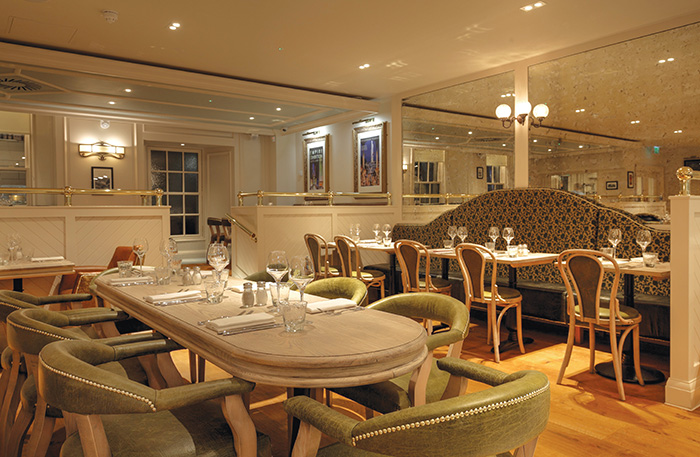 Designer Mark Brunjes said ‘splitting’ the space through the use of different styles of furniture gives customers a “different take” on the venue depending on where they sit.
“The areas are individual and each has a different feel but it reads as one,” he said.
“That was one of the main differences [to The Anchor Line]. To an extent, upstairs was about dressing features that were already there – from the cornicing to the marble pillars and floors.
“Downstairs was a blank canvass.”
Despite the differences between the two projects and resulting venues, there is some common ground – particularly when it comes to history.
Framed photographs of the original Atlantic restaurant, maps of the Empire Exhibition, and an original ticket from the event which was presented to Tony by a regular Anchor Line customer feature throughout the venue. As when researching the history of The Anchor Line, Tony worked with The University of Glasgow Archive Services to piece together the story of the original Atlantic restaurant and the Empire Exhibition.
And, as with The Anchor Line, Tony reckons showcasing another chapter of Glasgow’s history gives the venue an added dimension.
“The Anchor Line Shipping Company is a huge piece of Glasgow history, as is the Atlantic restaurant,” said Tony.
“People are proud to be Glaswegian and are interested in its history; and the Glasgow connection is here.
“It’s been really interesting researching it all and to have people bringing things in shows how important it is to them.
“The link is there with The Anchor Line but Atlantic has its own identity. It’s luxurious and comfortable; and it’s a bit softer than upstairs.
“We think this is the venue to find in Glasgow, and once people discover it they’ll keep coming back.”