A Tayside chef has taken a top sustainability award after seeing off competition from five rivals. 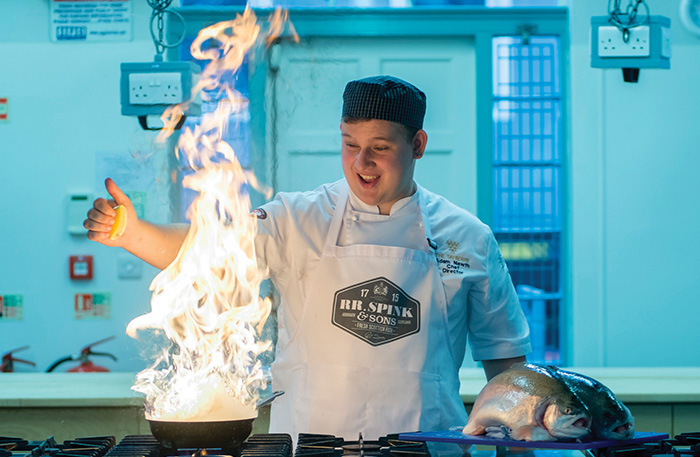 Adam Newth, of the Tayberry Restaurant in Broughty Ferry, was crowned Sustainable Trout Chef of the Year in a competition organised by fish supplier RR Spink & Sons in conjunction with The Federation of Scottish Chefs.
Duking it out in a live cook-off final held on November 25, Newth saw off five other chefs to pick up the prize.
Finalists in the competition were invited to demonstrate how they would use trout in a “healthy and enticing” starter and main course.
Three industry professionals – including Ian MacDonald, executive chef at St Andrews Links – were on hand to scrutinise competitors’ knife skills, presentation and the originality of their dishes.
Newth topped the competition by preparing a starter of smoked trout infused with Edinburgh Gin, trout tartare, brown crab potato salad, beetroot and wasabi ice cream followed by a main course of Loch Etive sea trout, sesame gnocchi, butternut squash, shrimp and Arbroath Buckie dressing.
As the inaugural trout champion, Newth will now join RR Spink & Sons for a three-day experience which will include time spent at Loch Etive, where the company’s trout is farmed.
This year’s competition is said to have attracted hundreds of entries from across Scotland.
The five other finalists competing in the cook-off final were: Graham Mitchell and Bob Miller, both of The Rox Hotel, Aberdeen; Glen Yorke of The Scottish Crime Campus Sodexo, Gartcosh, North Lanarkshire; Michael Knowles of the Loch Melfort Hotel, Oban; and Peter Kikke of The Gleneagles Hotel, Auchterarder.