Pubs giant JD Wetherspoon has shelved plans to open a pub and hotel in Stirling, and put the  property on the market.
The premises at 43 to 51 King Street had been earmarked for development by Wetherspoon, following the launch of its Crossed Peels pub in a former office block on Stirling’s Spittal Street last summer.

Stirling Council confirmed planning permission for the development was granted in August 2013 and a provisional premises licence application was rubber stamped earlier this year.
However, JD Wetherspoon has now put the King Street property on the market along with a further four Scottish outlets: Capitol in Dundee, The Society Room on Glasgow’s West George Street, The Earl of Zetland in Grangemouth and The Clydesdale Inn in Lanark. The five outlets – along with 29 down south – are being marketed by property firm CBRE.
The sale of the 34 outlets comes after Wetherspoon announced it was selling off 20 pubs across the UK, including one in Scotland: The Edward G Wylie on Glasgow city centre’s Bothwell Street.
JD Wetherspoon spokesman Eddie Gershon confirmed the company had “decided against” the pub and hotel in Stirling but would not go into the reasons for the decision.
“We can confirm that a number of our pubs in Scotland have been put on the market,” he said.
“Each of the pubs will remain open and trading until they are sold. At that stage staff will be offered a transfer to other Wetherspoon pubs or might wish to stay with the new owners.” 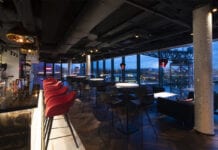 Glasgow hotel to raise the roof again for The Ben