The Highland Brewing Company has been relaunched with a new name and new branding as the firm sets its sights on a major expansion of its business. 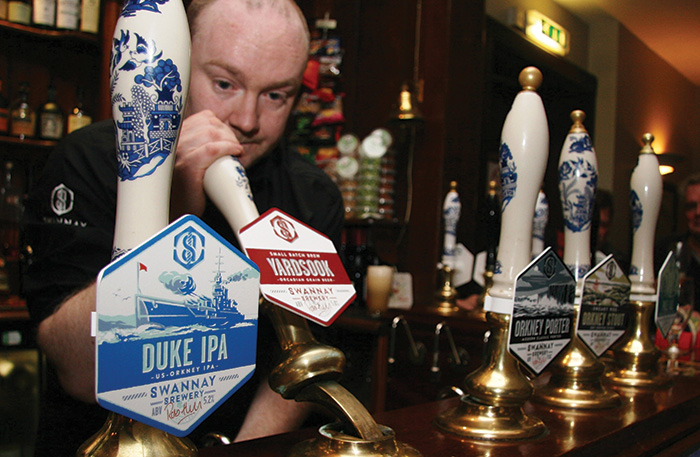 With support from Highlands and Islands Enterprise, the newly named Swannay Brewery has had its branding overhauled, complete with a new logo, product labels and pump clips.
The rebrand is said to have been carried out to “dispel any previous ambiguity” surrounding the brewery’s name – Swannay has traded as both Highland and Swannay brewery since it was established in 2005.
In addition to the rebrand, Swannay has also invested in its brewery on Orkney.
The firm has acquired four new 20-barrel fermenting vessels, which are said to boost production capacity to 100 brewer’s barrels per week – the equivalent of 28,800 pints.
Lewis Hill of Swannay Brewery said that after ten years of “successfully building business” the brewery is “investing for the future”.
“With this distinctive new identity we should raise our profile very effectively in an increasingly crowded, exciting market place,” said Hill.
“Previously the two names led to some ambiguity of identity, so the Swannay banner should now eradicate this and help build a strong brand following.
“But this is very much evolution not revolution.
“We have built up a terrific amount of support over ten years so the beer names stay the same but with a fresh, modern look that remains sympathetic so we have a true family of beers.”
Swannay Brewery produces a range of cask conditioned ales including Island Hopping; Pale Ale; Sneaky Wee Stout and Light Munro.