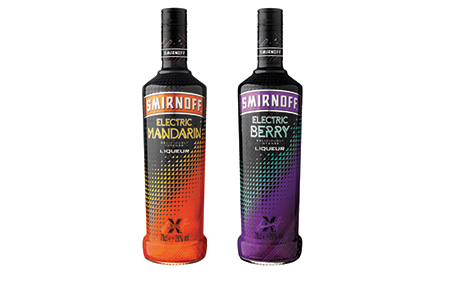 A liqueur range said to have been inspired by electronic dance artists has been launched by Smirnoff owner Diageo.
The Smirnoff Electric liqueur range comprises Berry and Mandarin variants; the bottles are designed in fluorescent purple and orange, respectively, both of which activate under black light.
The 29% ABV liqueurs have been launched in the UK on-trade and are designed to be served as a “chilled shot”.
To mark the launch of the Smirnoff Electric liqueurs, Diageo has joined forces with dance music artists Kiesza and Djemba Djemba to create a #WhatWeBring campaign music video called Give It To The Moment.
The video, which is said to celebrate diversity, includes a montage of storylines including a same-sex wedding celebration on a crowded Bangkok street. The campaign culminates in a documentary following the track’s remix journey across five continents.
“#WhatWeBring is more than a single music track and more than a new product release,” said Tim Parkinson, vice-president of global content at Smirnoff. “With it we’re aiming to create a global social movement that is driven by Smirnoff’s core purpose – inclusivity.”