An Aberdeen bar and restaurant has reopened following a three-month refurbishment. 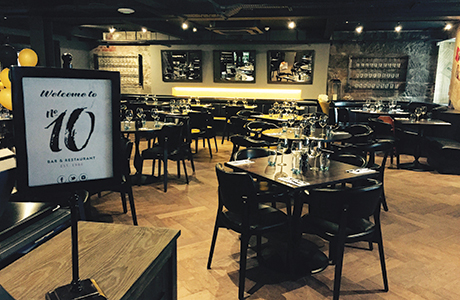 Located in the city’s west end, No. 10 comprises a 90-cover restaurant, created by expanding into the neighbouring building, and a glass-fronted private dining room, which can accommodate 14 people.
The bar area was also revamped and fitted with a new bar with illuminated gantry as part of the interior refurbishment, which was designed by Nicoll Russell Studios.
Allan Henderson, one of three directors of No. 10 Bar & Restaurant, which first opened in 1986, said: “Throughout the renovations, we worked hard to retain as much of the venue’s charm and character and we feel we have created a fantastic venue that caters for a wide audience.”
Scott McIntyre of Nicoll Russell Studios said the interior was designed to reflect the
heritage of the building, which was once occupied by a firm
of accountants and an asset and wealth management company.
Design features include a “traditional hand-written stock trading board and clocks set to global financial time zones”.