Craig Wood isn’t one to shout from the rooftops about  his restaurant.
Instead the chef prefers people to discover The Wee Restaurant in North Queensferry, which he has run with wife Vikki for almost a decade, via recommendations and word of mouth.
Located in the shadow of the Forth Bridge, which towers above the converted cottage, the 40-cover restaurant is small, but perfectly formed.
And it’s these understated qualities and focus on quality ingredients which helped it to win SLTN’s Restaurant of the Year (Casual Dining) Award for 2014,  sponsored by Bunnahabhain.

Craig’s background is in high-end restaurants, including Restaurant Martin Wishart in Edinburgh and The Airds Restaurant & Hotel in Port Appin, Argyll.
And it was a lifestyle change  – and a search for a home in the area – which prompted him and Vikki to open The Wee Restaurant back in March 2006.
Since then, the couple have quietly established the eatery’s reputation.
“We don’t shout and bawl about it,” Craig told SLTN.
“I think there’s a lot of people in Fife that still don’t know we are here.
“We just wanted it to be a nice neighbourhood restaurant. I kind of like it to be understated.”
Understated it may be, but The Wee Restaurant has gained much recognition over the years, including the SLTN Award, which Craig said was unexpected. He said the response from others in the trade was a “surprise” because the restaurant is not widely known.
“There were a lot of people at the [SLTN] Awards who didn’t expect us to win,” said Craig.
“But what we are doing is different from other restaurants.
“Our main draw has always been good quality and good value.
“We’ve not changed anything in the time we’ve been open.” 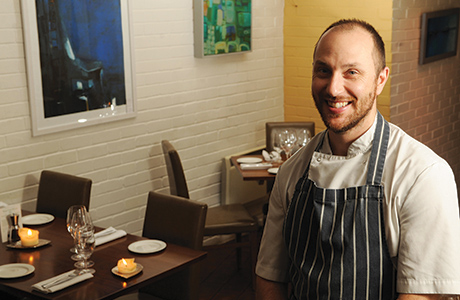 The decision to open almost a decade ago was “a leap of faith” according to Craig, but he said it has allowed him to spend more time with his wife and three children and given him a better quality of life. In addition to Vikki, who overseas the front-of-house, the couple employ full-time restaurant manager, Chloe McCallum and two part-time waiting staff. Sous chef Sam Dorey, meanwhile, provides kitchen support and deputises on the rare occasion Craig has a day off.
Meanwhile, Craig is in constant dialogue with his food suppliers to ensure he gets the best quality local produce, which includes fish from Anstruther and meat from family-run supplier Hendersons.
“The fishmonger might say I’ve some Brill or some razor clams for a really good price and I can then decide to put them straight on the menu,” Craig explained.
“People are now looking for local produce. Years ago you used to have a cheese board with Brie and Stilton, but now customers are asking for local produce such as Anstruther cheese.”
On the wet side of the business, wines are supplied by Philippe Larue from l’Art du Vin who provides what Craig described as a “well balanced and good value” wine list which is “constantly changing.” The Wee Restaurant also stocks Blond Ale from De Brus Brewery in Dunfermline and Spencerfield Spirits’ Edinburgh Gin.
Craig said the lowering of the drink drive limit last December has had an impact on alcohol sales. But he has moved to combat the changes by promoting the Scoot service which allows customers to be driven home in their own car.
“People are definitely more aware of what they’re drinking for that day and but also for the next day,” he said.
“I think there is now more awareness of what they consume.
“We are lucky that we have the train station nearby because people can enjoy a few drinks and get the train back to the centre of Edinburgh.”
Looking ahead, Craig and Vikki are preparing to celebrate The Wee Restaurant’s tenth birthday in March 2016.
The couple are also hopeful of an increase in business after the Forth Bridge picked up UNESCO World Heritage status.
“They are opening a visitor centre at the other end of the village, so hopefully it will increase footfall,” added Craig.